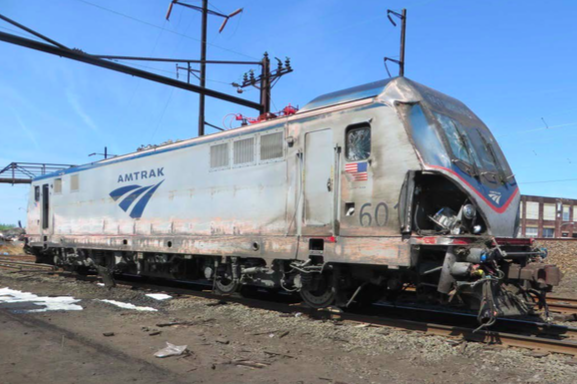 Involuntary manslaughter and reckless endangerment charges were dropped against the Amtrak engineer involved in the 2015 train derailment that killed eight people. Shown here is one of the trains from the derailment.

The decision marks the second time in less than two years that charges against Bostian have been dropped, according to NBC10.

The Pennsylvania Attorney General's Office is expected to release a statement about the decision later today.

Bostian was the engineer at the controls of Amtrak 188, a Northeast Regional train headed from Washington, D.C., to New York City on May 12, 2015, when the train derailed and tipped over on a section of Philadelphia rail lines known as Franklin Junction. The derailment killed eight people, and injured at least 200 others.

Investigators determined that while operating the train, Bostian accelerated to 106 miles per hour before the train entered curves of Frankford Junction, which has a speed limit of 50 miles per hour. In 2016, the National Transportation Safety Board ruled Bostian was likely distracted by radio communications while operating the train, though lawyers for victims pushed back against this explanation.

The charges against Bostian were dropped at a hearing in September 2017, after a judge dismissed involuntary manslaughter and reckless endangerment charges, but a different judge reinstated the charges in February 2018, claiming evidence at the hearing "should have been sufficient to warrant a trial".