Andrew Yang ordered a chicken cheesesteak from Jersey Mike's while in Philly, which is rough

The presidential hopeful opted for convenience over quality on Tuesday, and we think it could cost him 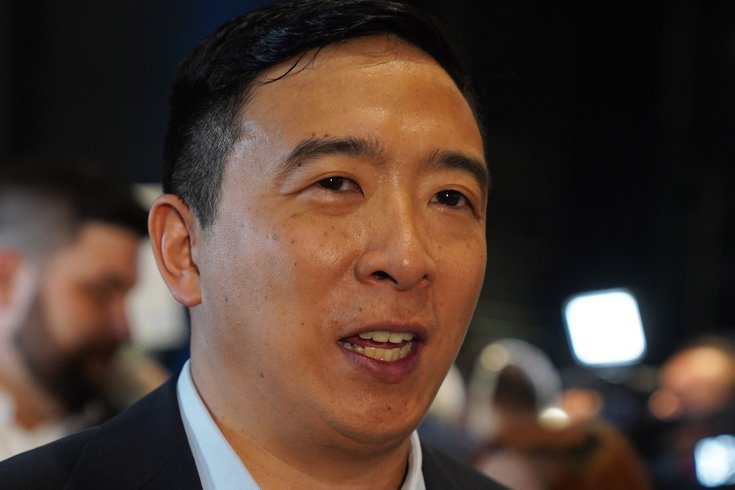 Democratic presidential candidate Andrew Yang was in Philadelphia on Tuesday for the first-ever Workers' Presidential Summit. He, along with a handful of other Democratic candidates, talked to local union members at the Convention Center about their vision for workers in the United States if elected president.

On Tuesday, Yang, who is famous for promising universal basic income to every U.S. citizen as a "freedom dividend" if elected, was spotted in line at Jersey Mike's at 30th Street Station. There, he reportedly ordered a chicken cheesesteak from the regional sandwich chain:

I know people have a thing about taking selfies with candidates but @AndrewYang just let me stand in line with him and shoot the shit while he ordered a chicken cheese steak (my favorite) at the 30th St. station Jersey Mike’s pic.twitter.com/p354lQp5lv

For a candidate who's built a surprisingly strong coalition among people who believe they are rational thinkers -- see Yang's popular "Math" hats -- there is no excuse for Yang to order a Jersey Mike's cheesesteak during his brief time in the country's sandwich capital.

Man, there is no way a real Philadelphian can vote for you now.

Listen I live in SoFL and I bet that I could find you 4 AWESOME sandwich shops if you come here and we've got nothing close to the yumminess of REAL Philly cheesesteaks. I agree you dont get a chicken cheesesteak from Jersey Mike's in Philly. You just dont.

dude, get out Yang. Jersey Mike's cheeseteak is an insult to all of us. https://t.co/y78dhG7SUK

Did you also direct him to a legit cheesesteak spot?

Yang went to Jersey Mike's for a cheesesteak in Philly and that is just not acceptable.

I'm sure people will argue that, being a busy man, Yang was simply trying to optimize his time by grabbing a quick sandwich before jetting off to another location. I understand that time is money, and it was 9 p.m., which meant his cheesesteak options were low.

Admittedly, the stretch of Philly between the Convention Center and 30th Street Station isn't exactly a cheesesteak haven, but there were other options. His staff was in the city all day!

Yang could've sent a handler to Reading Terminal Market, right next to the Convention Center, for either a cheesesteak from Spataro's or a roast pork from Dinic's. He could've grabbed a HipCityVeg cheesesteak on his trip from Center City to University City, if he wanted to send an eco-friendly message. Shoot, he was blocks away from both the Center City and University City locations of Steve's Prince of Steaks at different points during the day.

What I'm saying is, there's no room to make easy mistakes when you're running a long shot presidential campaign. If Yang returns to Philly in the months before the field gets narrower, his to-do list should start with getting a quality cheesesteak in the country's best city.