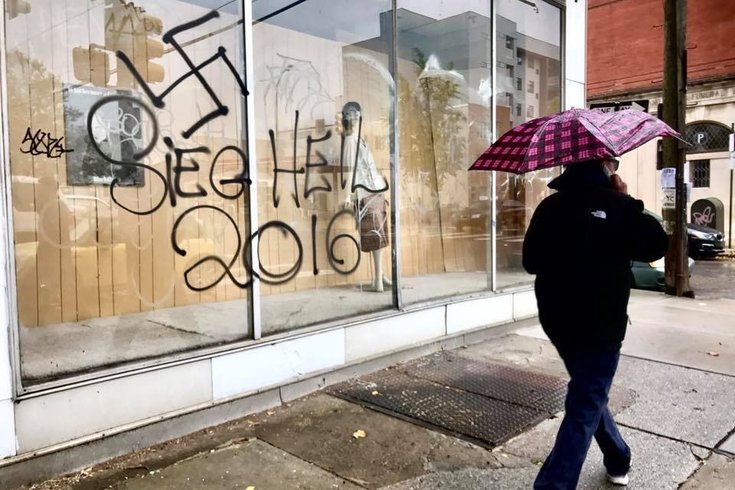 This photo shows one of two swastikas that were spray-painted on the window of a closed business at 1300 S. Broad St. in South Philly in November 2016. The Anti-Defamation League says anti-Semitic incidents rose significantly in 2017.

The ADL recorded 96 anti-Semitic incidents in Pennsylvania in 2017, marking a 43 percent increase from 2016. That stands as the state's largest single-year increase in the last 10 years.

In New Jersey, the ADL recorded 208 anti-Semitic incidents – the third highest total in the United States. That marked a 32 percent increase from 2016.

The ADL – a nonprofit that combats the spread of anti-Semitism and bigotry – released on Tuesday an annual audit detailing incidents across the country. Nationwide, anti-Semitic incidents rose by 57 percent, the largest single-year increase on record.

Jonathan A. Greenblatt, the ADL's chief executive officer, attributed the rise to a "confluence of events" that included bomb threats, cemetery desecrations and white supremacists marching in Charlottesville, Virginia.

"These incidents came at a time when we saw a rising climate of incivility, the emboldening of hate groups and widening divisions in society," he said in a statement.

In Pennsylvania, anti-Semitic incidents have risen in four of the last five years, according to the ADL. In New Jersey, they have increased in each of the last four years.

"Bigots feel emboldened to flaunt their hateful attitudes more publicly than ever, as illustrated by a doubling in acts of vandalism," she said.

In Pennsylvania, the ADL recorded 45 incidents of harrassment and 51 incidents of vandalism. The latter jumped 104 percent from 2016. Many of the incidents occurred within the Philadelphia region.

In Chester County, a photograph of people standing with jack-o-lanterns carved with swastikas and other hate symbols was distributed online.

In Montgomery County, a Jewish teacher received letters with anti-Semitic content and apparent feces smeared on the letter.

In Bucks County, an elementary school bathroom was defaced with swastikas.

In Philly, rocks were thrown through the window of a Tacony synagogue during Friday night services. More than 100 tombstones were overturned at Mount Carmel Cemetery. And swastikas were painted outside a building where employees of a Jewish nonprofit live.

Similar incidents occurred throughout New Jersey, where 110 incidents of vandalism, 95 incidents of harassment and three physical assaults were recorded.

A middle school bathroom in Camden County was vandalized with swastikas. Another middle school students received several anti-Semitic posts on Facebook. And a voicemail advocating for the destruction of Israel was left at a Jewish organization.

"Educators and parents must teach children to be allies to their peers in the face of hate and bullying," Baron-Baer said. "Elected officials must pursue policies that promote civil rights and reduce discrimination. The only way to stem the rising tide of bigotry is for every individual to commit to challenging hate."