Absence of civil society in government, where policy is reduced to 'sound bites and 140 characters' a worry 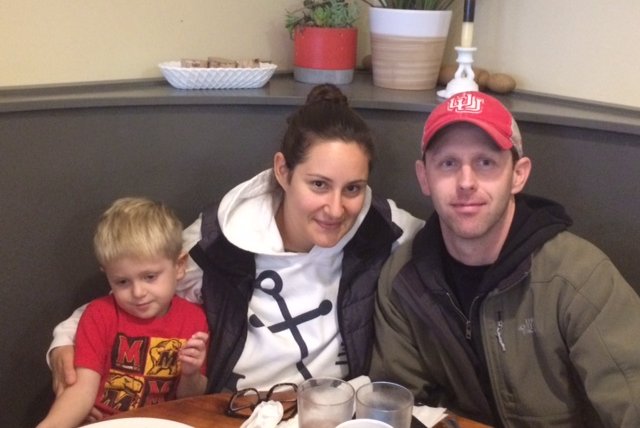 Gabriel Kirkham, Rachel Kirkham and Jay Kirkham spent the morning after the presidential election digesting what had happened over breakfast in Collingswood. Dr. Jay Kirkham, a former senate staffer who is a moderate Republican, thinks the popularity of Donald Trump is a sign of the "Kardashianization" of the country.

Anxious: That's the common thread following the vote that made a businessman and reality show star the president-elect of the United States.

Jeanne Falgie, a longtime waitress, said the neighborhood clientele – many affluent Rittenhouse Square Republicans in an otherwise Democrat-leaning city – were abuzz, happy with the outcome.

But not so their children.

The parents voted for Trump, “because they are basically tired of how things are under Obama,” she said.

Her customers tried to calm their children’s fears by telling them the rap on Trump was simply “slander.” But the veteran waitress said the children were not buying their parent’s explanations.

Sally Redlener, a counter customer at Little Pete’s who was reading the New York Times over breakfast, thinks Democrats have themselves to blame.

“They didn’t listen to what Trump and his masses were saying. The Democrats were emotional and the Republicans talked about the economy," she said. “Trump said horrible things, but it seemed people ignored what he was saying. I feel badly. This will be bad for climate control, health care.”

A South Philly woman who is a registered Republican stopped by pick up lunch for her boss, a staunch Clinton supporter. She admitted she had voted for Trump, but said she didn’t want her name used because of friction with her boss.

“We needed a change. Health care is out of control,” she said, tossing a cigarette butt in the gutter.

Around the corner on Walnut Street, Mike Hultz, who has been homeless for about three months due to an ankle injury – he was a driver – said he’d voted for Clinton.

“She was the candidate for someone in my situation," he said. "The way I’m living now makes me a Democrat.” he said."

“If Trump keeps being loud and obnoxious, it will cause trouble,” added Hultz, as a cop stopped to roust him from the nook where he had sheltered out of the rain.

Still, Hultz said he didn’t think a Trump presidency would make much of a change in his own life.

Across the river in South Jersey, Sandra Gauaglione was shopping at an Aldi’s in Collingswood, near the Ferry Avenue train stop in Camden, and feeling happy about the election.

“I liked what Trump stood for,” she said, mentioning secure borders, health insurance and abortion as topics that mattered to her. She said she gets most of her information from WNTP 990, an AM radio station in Philadelphia.

“If Hillary had gotten in, it would have been four more years of the same,” she said.

The Kirkham family was at Sabrina’s Café in Collingswood, “eating our feelings,” as Rachel explained, as she drenched her French toast with syrup. They were at once depressed and anxious.

Originally from Washington and its suburbs and now living in Cherry Hill, the Kirkhams don’t fit in neat boxes.

Rachel, who is a registered Democrat, played soccer against Chelsea Clinton and voted for Hillary Clinton.

Rachel’s dad was gay. He took his own life when Rachel was just five, due in part to his sexual orientation and societal reactions, according to his daughter

LGBTQ issues were part of what drew Rachel to support Clinton.

Jay is a doctor, a heart specialist. But before that, he was a senate staffer on health care policy for former U.S. Sen. Olympia Snowe of Maine, a moderate Republican.

He’s a Mormon. She’s a wavering Christian. Their kids go to a Catholic School.

“We’re all over, you don’t know!” said Jay, cutting into his breakfast steak.

“We’ve been a house divided politically for all of our 15 years,” said Rachel.

And yet they get along and see-eye-to-eye on issues critical to their family, something politicians can't manage.

“It is very nuanced. We are not your typical family. But no one is anymore,” said Jay, who wrote in an obscure third-party candidate rather than voting for Trump or Clinton.

Rachel said she didn’t go to sleep until 4 a.m. because the results agitated her.

“Progress for the LGBTQ is in jeopardy. I pray for the people I love. A little part of me was crushed,” she said, adding that school drop-off this morning was “somber.”

“We worry about the rhetoric we hear. We teach our kids not to bully, to be kind, to make good choices. I’m afraid they will understand what our president says! It’s hard to be undermined by the most powerful man in the world," explained Rachel.

Jay said he’s the saddest due to the “Kardashianization of America,” and the absence of civil society in government, where policy is reduced to “sound bites and 140 characters.”

He said voting for different candidates should be about “respectfully disagreeing.”

But that’s no longer the case, he said, swallowing his last bite of medium rare steak.