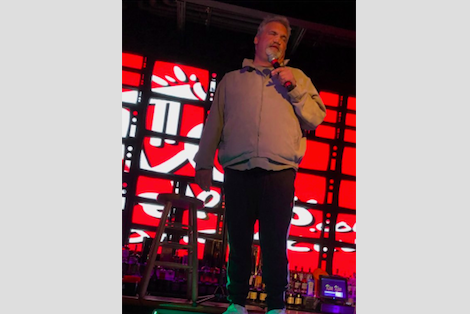 Artie Lange did his first set in Atlantic City on Saturday after being in rehab.

Comedian Artie Lange returned to the stage for the first time in months at AC Jokes Comedy Club on Saturday in Atlantic City.

Page Six reported that Lange's first show back was a sold out set in Jokes Comedy Club inside Bally's on Saturday night.

"Me on stage in AC last night," he tweeted. "It feels great to be back.  You fans are so loyal. Sold out. You rule!  The guys at AC Jokes were awesome. Check their clubs out!  Peace!"

Me on stage in AC last night. It feels great to be back. You fans are so loyal. Sold out. You rule! The guys at AC Jokes were awesome. Check their clubs out! Peace! pic.twitter.com/8ZaucjdNui

It looks like his next gig will be at the Hoboken Comedy Festival on Oct. 3. You can grab tickets here.

This is Lange's first time back on stage is quite some time. The New Jersey comedian has been in-and-out of jail and rehab programs since 2017 for various drug charges. Earlier this month, he announced he had completed his most-recent program and was back home after being seven months sober.