Artist explains his insane Etch A Sketch of Philly skyline 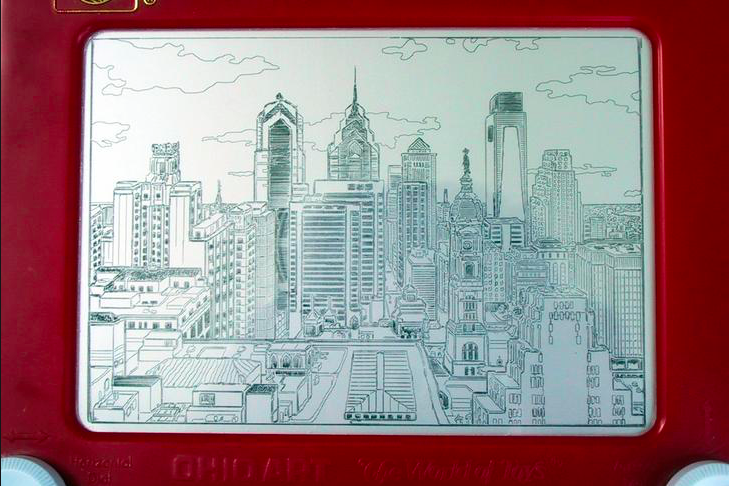 Center City Philadelphia on an Etch a Sketch.

The iconic Etch A Sketch is one of the few remaining analog toys that can capture a child's attention for hours on end. You could probably swap a kid's tablet with one of these, and he or she would still have just as good a time doodling lineographic images with aluminum powder.

Introduced to the world in 1960, the Etch A Sketch has also endured as a canvas for artists doing much more than child's play, as highlighted in various corners of the internet.

Earlier this week, an unexpected post on the Philadelphia subreddit left frequenters of the site astonished by the work of an artist who made an Etch A Sketch of Center City. The post received more than 6,200 upvotes and generated a healthy, typically Philly discussion.

"Two stepper motors and any decent gcode generator does this," one wiseacre wrote. "They just hook up the steppers to the knobs with some belts or rubber bands and [voilà]."

Yeah, alright, but this was done by an actual person, not a machine. The artist's name is Bryan Madden, and he's not your average Etch A Sketch hobbyist.

"I work parties, corporate events, weddings, things like that," Madden told PhillyVoice on Tuesday evening. "I use pocket Etch A Sketches to help people memorialize their experiences."

His sketch of Philadelphia was actually completed in the summer of 2010.

"I finished it in about 15-20 hours over a two- to three-week period," Madden said. "I'd maybe do one major landmark per day." 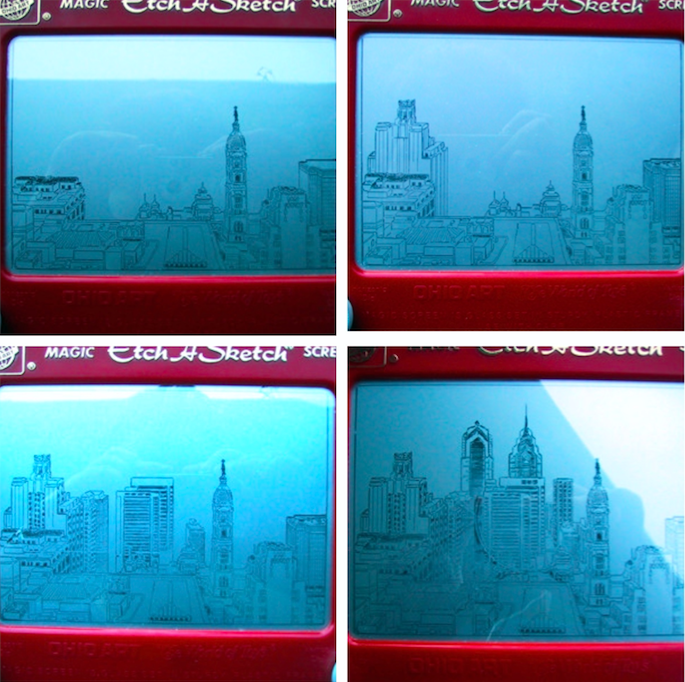 Etch A Sketch knobs work on an XY axis, for those who haven't picked one up in years. If you want to draw diagonals or curves, you have to turn both knobs at the same time.


"Cities correlate well with the up-down, left-right aspect," Madden said. "You can't pick up and start again somewhere else. To get from one point to another on the screen you have to retrace steps, or work along edges."

In other words, you can't afford to screw up. Madden said his sketch of Times Square took him about 50 hours, including one mistake that forced him to scrap about ten hours of work.

"The further you get along into it, the more nerve-wracking it gets. You can sometimes mask it, but if you get a line jutting into the sky, that's the stuff you don't want," Madden said. "One of the most difficult things when I'm doing a long, drawn out thing is remembering where I left off. That's a really common way to make a mistake."

Once a sketch is finished, Madden makes sure to remove the aluminum powder from the back of the Etch A Sketch so the image on the screen becomes permanent.

With the holiday season entering full swing, Madden is now looking to sell his Philadelphia skyline sketch. In the past, he sold his San Francisco sketch to a local t-shirt shop and his Times Square sketch to a buyer from Reddit.

How much does something like this go for? Expect a couple hundred dollars, a price well worth all of your guests marveling at a unique piece of art.

Madden said there's already been some serious interest from potential buyers, but those interested inquiring can reach the artist at BryanLeeMadden@gmail.com.