Is there an enlightened way to interpret Yeezy's latest handiwork? 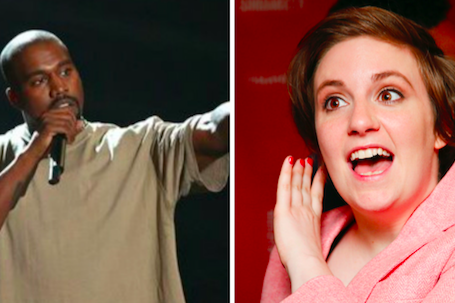 Kanye West (L) accepts the video vanguard award at the MTV Video Music Awards in Los Angeles on Aug. 30, 2015. Producer Lena Dunham (R) is interviewed at the premiere of "Suited" during the 2016 Sundance Film Festival on Monday, Jan. 25, 2016, in Park City, Utah.

Yeah, we're not going to post a link to Kanye West's new NSFW video for "Famous," his fourth track off 2016's "The Life of Pablo" and a waxy, synthetic spotlight on celebrity — if we're to take the polarizing West at his word.

There is, however, an interesting background with a local twist behind the inspiration for the video. The general concept, a rolling series of overhead shots of nude celebrities in bed, was inspired by Vincent Desiderio's acclaimed "Sleep," which debuted at Manhattan's Marlborough Gallery in 2004 but wasn't completed until 2008.

Kanye took Vincent Desiderio's "Sleep" & brought it to life with a modern twist.. if that isn't genius idk what is. pic.twitter.com/bSDddfQFNo

Desiderio, considered one of the world's premier living painters, is currently a visiting critic at the Philadelphia-based Pennsylvania Academy of Fine Arts. When Cosmopolitan recently caught up with him, Desiderio praised Kanye's dedication to making artistic statements that drop like anvils.

"It's an extraordinary and bold and different move for Kanye West, and what I would say is that it is the clearest indication of his overall intentions as a person utilizing the media and working within it. I was absolutely floored and incredibly flattered and incredibly happy to see the video, which I think is really beautiful."

Desiderio agrees with Kanye's portrayal of himself as a contemporary Andy Warhol, a pop fiasco who puts himself out there to be "intentionally misconstrued" in the press and on social media. But the artist declined to go into further detail about his collaboration with West because he is currently writing about it. We don't know when or where he'll publish his thoughts.

In the meantime, many others — including former president George W. Bush — have expressed their feelings about "Famous" in loud and clear terms. Taylor Swift, the prototypical Kanye frenemy whose likeness is featured in the video, is reportedly "horrified" by her appearance.

On Monday, producer and activist author Lena Dunham came to Swift's defense to decry "Famous" in a Facebook post entitled, "Peeking From Between My Fingers."

"It gives me such a sickening sense of dis-ease," Dunham says at one point. "I was raised in the art world by a dad who painted aggro scenes of sexuality and war and a mom who, ironically enough, has photographed some butt naked life-sized dolls of her own ... But this feels different ... Here's the thing, Kanye: you're cool. Make a statement on fame and privacy and the Illuminati or whatever is on your mind! But I can't watch it, don't want to watch it, if it feels informed and inspired by the aspects of our culture that make women feel unsafe even in their own beds, in their own bodies."

The memes and astounded Twitter reactions have been multiplying by the day. West himself tweeted, "Can somebody sue me already #I'llwait," but he later deleted his keyboard dare. In any event, a lawyer tells Hollywood Life that any potential lawsuits would "probably fail" because it would be difficult to prove damages in court.

All of this adheres to the siren-like artifice of Kanye's most controversial dalliances over the past decade (remember, he might could run for POTUS in four years). As a viewer, you have to confront whether his output is disturbing because it comes Property of Kanye West or because it's actually just disturbing — it manages to make the sacred profane, even violent, as Dunham nearly suggests.

As a work of representational art, Desiderio's "Sleep" didn't elicit nearly the same spirit of revulsion, though it was instantly considered a powerful and multilayered project. One could argue that paintings simply no longer reach a critical mass on Kanye's level — and the emotional reactions they produce come from a select and fundamentally intellectual place.

On the other hand, Desiderio has in the past likened painting to film when asked about a rumor that he wanted to turn "Sleep" into a cinema project. From his 2014 interview with Painting Perceptions:

"Cinema is as big an influence on my work as is the history of painting. If however the influences are apparent it is through sublimation rather than imitation. For me film is closer to painting than anything else."

Maybe that's one of Kanye West's targets with "Famous," a topic deserving of shock value, at the very least. Warhol had his own "Dirty Art," but the difference is that most people only ever saw the Campbell's soup cans, or the faces of Marilyn Monroe and Mao Zedong. At some point, Yeezy might have to do something genuinely wholesome, yet still aesthetically vibrant, in order to keep justifying these provocative winks. It wouldn't define him any more or less than this does.