Ask Hickey: Are people who wear blank caps and sunglasses totally shady or what?

Nothing to fear but bros in blank caps and sunglasses

In the movies, when people are supposed to maintain a low profile, they always wear sunglasses and a baseball cap with absolutely NOTHING on it. The cap is usually a solid color. Where do they buy these caps and if you see someone wearing one, is it safe to assume they're up to no good? – FreemanMcNeil24, via Twitter

Ah, that one’s easy: They go with the blank lids because of licensing issues. As in, if you want to wear a Cubs hat in a movie or TV show, you’d have to kick some dolla dolla bills y’all to Major League Baseball.

Think of it like movie soundtracks and video games. Aerosmith didn't let them use their tracks on "Guitar Hero" out of the kindness of Stephen Tyler's raisin-y heart, you know.

They’re available – on the cheap – from any number of online outlets. (See the top first-page Google results here, here, here and here.)

As for your other question, yes, if you see someone wandering around the streets of your hometown with shades and a blank cap on, it’s safe to assume they’re up to no good. In fact, err on the side of caution and don’t approach them as they might be armed and dangerous.

What does Philly need most?

Philly has been improving for the past 10 to 15 years, but still has areas to improve. Which of these major improvements would drive the area forward the most and why: K-12 school improvements, transportation, crime, housing affordability, or other? –Jason K., via Facebook

The timing of this question couldn’t be better as the Hickey family is entertaining the notion of seeking a new house to call home. I won’t get too in-depth with that now, as it will be the focus of a later story. Suffice it to say, though, these are considerations that come into play as we ponder the ideal location.

Many of these issues are closely aligned with your fixed point in the city’s geography. For instance, crime would be a major concern in much of the city, but not in my little nook of East Falls. (That said, a LOT of Philadelphians disagree, per a recent Pew Charitable Trusts poll.)

Polling from The Pew Charitable Trusts found that education was the biggest concern for Philadelphians in 2015, while crime and public safety jumped to the head of the pack one year later.

Transportation is also good here, what with a couple bus routes and the Regional Rail line getting you down to Center City with the quickness. Plus, Kelly Drive is a pretty commute, if cars and bicycles are your thing.


While other neighborhoods feature parking blood-wars, I don’t see much of it up my way, since we have permit parking on the street.

All of which is to say some may say transportation improvements and crime declines are most important to them, but they aren’t the primary disses against a lovely city when you’re lucky enough to be situated in America’s dwindling middle class.

Time and again, I’ve seen studies that note Philadelphia’s housing stock fares well in the affordability game when compared to other major cities (and even some suburbs). Sure, lower prices would be helpful for those with less money, but I’m not so sure that that dynamic is holding the city back all that much. (Even today, when we’re at peak seller’s market in the real estate world.)

With your open-ended “other” category, I could see taxes being of major importance to many – ourselves included – even though I come from the ideological camp that holds paying taxes to ensure services are provided for ourselves and others – i.e. pothole repairs, police and fire, public schools, etc.— is the right thing to do.

Could our taxes be lower here? Abso-frickin-lutely, but I never buy it when people say they fled the city because of ‘em. That’s because – quite frankly – suburban taxes are more onerous than those within the city limits. (And if the city did a substantially better job of collecting delinquent taxes, well, that’d be a miraculous improvement).

That leaves us with K-12 school improvements, which I believe would be most likely to drive the city forward. I say this as part of a family who ultimately went the pay-for-private-school route instead of settling for the not-quite-yet-up-to-par catchment school in the neighborhood.

That’s not to say the school is bad. It’s not. In fact, it’s rapidly improving.

However, it’s not yet at a point where people with the financial means to send their children to other schools choose catchment over doing so.

That’s much to the dismay of the public-educational warriors who sneer and deliver a holier-than-thou message that it’s irresponsible to spurn the local school.

Sorry, but we don’t play political-statement games with our offspring. If we did, we’d save thousands and thousands of dollars a year, though. Getting that money back plays into why many people flee the city for the suburbs.

While it once made sense to stay in the city and take on that extra expense, the tax gap is narrowing to the point where it soon won't. That could prove decimating for Philly's middle-class statistics.

If Harrisburg did its job and came up with a fair-funding formula for city schools, it would help immensely. I don’t know if that’s going to happen in this age of “me first” politics, ethics and morals, though. (Thanks, Trump!) 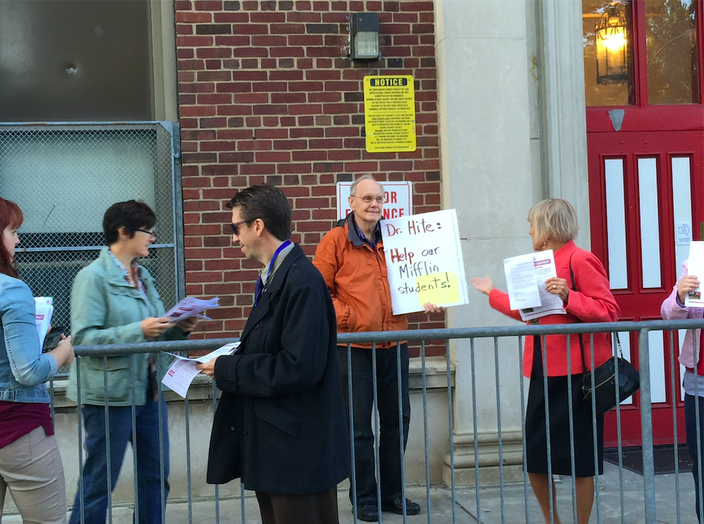 Members of the East Falls community and teachers at the Thomas Mifflin School staged a 'walk-in' event on Thursday, Oct. 6, 2016 in the hopes of convincing the school district to send a new teacher over to help address overcrowded classrooms inside.

A bolstered pre-K program is a great way to get that ball rolling, (much to the dismay of soda-tax haters who have yet to answer this simple question: If city supermarkets have to slash jobs because of dwindling soda sales, why haven't their suburban peers started hiring courtesy of skyrocketing soda transactions?)


Public education in the city is a long-term problem with a longer-term fix, and the space/time continuum doesn’t allow for pausing a child’s age until the schools catch up.

When the only way to get into a good school is to hit a patently offensive “lottery” drawing, or pay for it on top of your public-school taxes, it worsens the city overall.

Nothing short of major improvements will change that dynamic and launch a trickle-up sense of generational growth.

Ergo, what Philadelphia needs to focus on most for its long-term survival is fixing its schools.