Ask Hickey: Should Philly tear down any statues like New Orleans did? 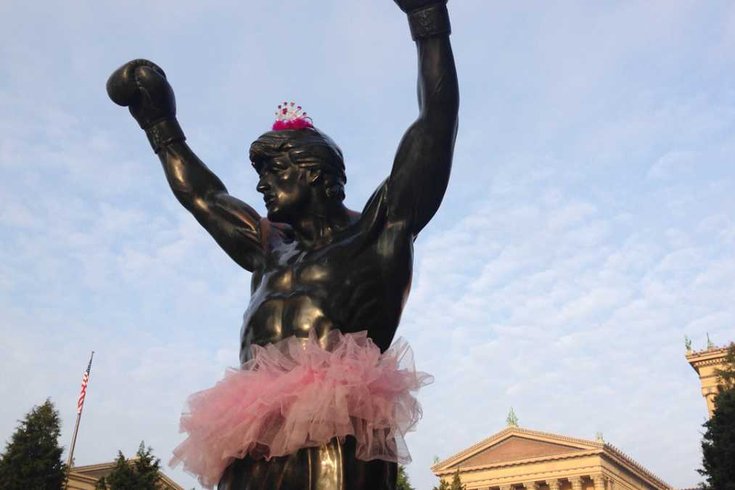 On Halloween 2013, some prankster(s) slid a tutu and tiara onto the Rocky statue outside the Philadelphia Museum of Art. It was a sight to see.

Tear down that offensive art!

You see that s*** with people flipping out that Confederate statues are being removed in New Orleans. Sad! Do you think any statues should be removed in Philly? – A.D., via Facebook

The first death threat I ever received in this business came in mid-1996. I was working at a small newspaper in South Carolina. (Florence Morning News, REPRESENT!) Anyway, the editor there decided it would be a good idea to give me a weekly column. (Pretty lofty accomplishment for a 22-year-old Yankee, if you ask me.)

In any event, there was a big controversy about whether the state should stop flying the Confederate flag at the Statehouse in Columbia.

Obviously, I thought that they shouldn’t fly a symbol of hate.

And obviously – as you can see, 21 years later – I’m not good at keeping my thoughts to myself.

The column I wrote about it had a lede that went a little something like this: “The Civil War ended 131 years ago. The north won. You lost. Get over it.”

Yeah, no; that didn’t go over too well with some of the readership to the point that I slept with a knife next to my bed just in case anybody followed through with the mean things they wanted to do to me, per their correspondences via phone and U.S. Mail.

I mention all that because it’s what came to mind when I saw a story about a bunch of crackers who took their citronella tiki torches to Charlottesville, Va. in an un-intimidating attempt to stop city officials from doing the same thing their peers in New Orleans had already done.

Now, I’m not one for censorship or the destruction of art or anything. (Except, of course, my request for folks to burn copies of “The Art of the Deal” and send video to me on my birthday. That’s fine because ghost-written drivel doesn’t qualify as art or literature worth protecting. June 3 will be here before you know it, folks.)

But, I will entertain your question regardless.

Over the years, I’ve heard some chatter (from borderline-sane people) about moving that Rocky Balboa statue away from the Art Museum or (from a suburban-friendly publication named after the city) tearing the Christopher Columbus one down near Penn’s Landing.

Neither seems like a reasonable, rational thing to do. In fact, quite the opposite. The former is a tourist attraction; the latter isn’t akin to the Confederate flag. So, knock them off any potential list.

Let’s instead take a quick peek at some public art in Philly and see what’s chopping-block eligible.

The Adam and Eve statue off Washington Square gets some consideration what with it being about the story that – should they believe it to be the case – led to humans being born with original sin.

What if “The Gates of Hell” jawn over at the Rodin Museum is beckoning demons to our city? If that’s the case, maybe that’d be a good one to send to Pittsburgh or Baltimore.

If you’re a bird lover, I suppose you might have a beef with the "Prometheus Strangling the Vulture" sculpture outside the Art Museum. But, I don’t think it was intended to be a celebration of animal abuse.

Beyond that – with one exception – I couldn’t see anything questionable in the list of Philly’s public art. (If you do, by all means, send the objections over.)

But let’s move onto that exception, meaning that Frank Rizzo statue waving to all from outside the Municipal Services Building.


It’s already been the topic of heated tear-it-down friction.

Some people think it should be done away with. Some people don’t. It’s a microcosm of any issue in America these days.

In any event, I ain’t all about tearing that Rizzo statue down.

What I am all about is entertaining the notion of moving it to South Philly.

It’s where he was most beloved.

It’s a place where it wouldn’t be antagonizing people who don’t want to look at their totem for Philly’s billy-club-swinging police heyday.

And, it wouldn’t be erasing a part of the city’s history.

To recap, nah, I don’t think Philly has any statues on par with those Confederate-loving ones that got what they deserved in New Orleans and beyond.

Second place is for losers, and losers don’t deserve statues.

Get this dang song out of my ear!

I've had the song "In the House of Stone and Light" stuck in my head for 2 days. Is it too early for an Ask Hickey on remedy? -- @Joshthescribe via Twitter

You’re gonna need to give me a couple minutes to figure out what song about which you’re asking, Josh. (Goes onto YouTube, searches for song name, finds it.)

Ohhhhh, I remember that song. I think I heard it most often in dentist office waiting rooms, elevators or on that radio station that Teri Garr used to do commercials for. (Side note: Teri Garr’s the bomb, yo. Respect, Teri.)

I mean, it’s not a horrible song but it’s not really a good one, either. Since it’s a syrupy track of positivity and religious introspection, it’s not necessarily a debilitating thing to have stuck in your head for a while. But, yeah, that feel-good would turn to feel-ready-to-riot before long.

Two days is probably the limit to subject yourself to an oppressive earworm. There are recommended remedies for this affliction, and I’m going to share them with you for fear that you may be losing this battle.

A "Psychology Today" piece suggests listening to said song half-heartedly and then, immediately after it ends, “engage in a cognitively-engrossing activity” like Sudoko, crossword puzzles, tearing down public statues or trying to estimate the damage being wrought to the country in the eyes of the world each and every time the orange president tweets.

WebMD offers some great info on common earworms but, in suggesting that you “try not to think about it” or to “distract yourself by thinking of or listening to a different song,” falls short in the practical-advice column.

For science nerds, you can delve deeper into the science-y side of things via this “Dissecting an Earworm: Melodic Features and Song Popularity Predict Involuntary Musical Imagery” research.

While I wish you luck, I have to admit that my current earworm is going on Day Two (when I wrote this on Monday).

I'm not sure I ever want it to stop.