Ask Hickey: Was Meryl Streep right about sports not being art?

Up the Rocky Steps and into the museum

Should athletes be considered artists? #AskingForMerylStreep (@MTW6 via Twitter)

Hoo boy, what a time to be alive, what with president-elects going on (what I hear was) a pre-dawn tweet-storm after an actress dared criticize him without even saying his name.

It is folly to pretend to know what’s going on in the mind of a man who lost the popular vote in November’s presidential race. It is also all but guaranteed that you’ll get a rise out of him, should you dare offer an in-his-face critique. That’s what the person for whom you’re asking this question learned earlier this week.

Let’s drill down to your query's core.

In her lifetime achievement award acceptance speech at the Golden Globes, decorated actress Meryl Streep noted, “Hollywood is crawling with outsiders and foreigners, and if we kick ’em all out, you’ll have nothing to watch but football and mixed martial arts, which are not the arts.”

I get how easy it is to paint her word as elitist, even smarmy. She’s loaded and more famous – infamy doesn’t count in the fame-point tally – than a reality-TV POTUS-to-be who convinced folks that he’s more grounded than he ever dreamed of being, if he was inclined to harbor those dreams in the first place, which he most assuredly isn’t.

But does she have a point? Yes and no.

Now, I’d deem organized American football as being closer to physics and engineering than art (which, in and of itself, is a fluid term that can be molded to mean many things). This is primarily because of playbook nuances that trace players’ paths from location to location while relying upon path clearances in some situations to make those movements possible.

Of course, there are caveats.

Sometimes, sporting narratives have an artistic feel to them.

The way the Cubbies won the World Series after generations of fans lived and died amid their century-plus drought. (Go Cubs.)

I’ll call another caveat the Barry Sanders effect, so as not to cover American football as a whole.

Sure, he’s an outlier, but he always struck me as the kind of player whose body controlled his mind instead of vice versa. There is no way on earth a human mind could foresee some of the unorthodox cuts and jukes that made him so great, entertaining and, to a certain extent, superhuman.

He was art in motion.

To watch Barry Sanders play was to watch an artist create magic on an astroturf palette in a way that transcended his sport. Just watch:

He is the exception, not the rule. So, no, I wouldn’t deem American football an art form either.

Though actress lady confined her comments to football and MMA, you asked about athletes in general. (I think you all know where I’ll be going from here.)

Yes, some athletes are artists.

I’m talking about the Wayne Gretzkys of the continent, and the Lionel Messis of the globe. I’ll also throw gymnasts, divers, figure skaters and skateboarders into that mix.

Gretzky’s artistry, however, didn’t extend sport-wide. However, futbol – or soccer – can feel more like art than sport, at times. That also helps explain why many Americans don’t really connect with it (which is fine by this soccer enthusiast, who admittedly isn’t all keen on looking at paintings on walls.)

A team is an ever-evolving entity – a distinct organism – on the pitch, under the guidance of maestros both pacing the sideline and roaming the midfield. It can reflect moods, tones, contrasts and other artsy terms with which I’m not familiar but know when I see. The avenues for creativity abound.

And when Messi has the ball (like Pele and Ronaldinho before him), any moment can be the other side’s Persistence of Memory, morphing space and time into an unrecognizable reality.

All of which is to say that Meryl Streep was right, but only because she confined her comments instead of saying sports, as a whole, can’t be considered part of the arts community, which some can.

Pick a bridge, either bridge

Which bridge is better: Ben Franklin or Walt Whitman? Those other bridges are garbage, so don't even bother. (Jitney Guy, via Twitter)

Bro, you’re the jitney driver. Shouldn’t I be asking you this?

Ah, whatever. You asked, I’ll answer. (You’re totally right about the other bridges, fwiw.)

Heading to the stadia from New Jersey? Walt Whitman.

Heading from Philly to Franco’s for a panzarotti, the Collmont for a beer or Perk’s for a haircut? Ben Franklin.

Heading to the shore from Philly? Well, that all depends on traffic along I-76 or I-676.

From an attractiveness standpoint, the blue Ben Franklin is markedly prettier than the bodily fluid hued Walt Whitman. While the distant view of the skyline from the latter is cool, the up-close view from the former rules. (Heck, you can even run over it!) Just look at this: 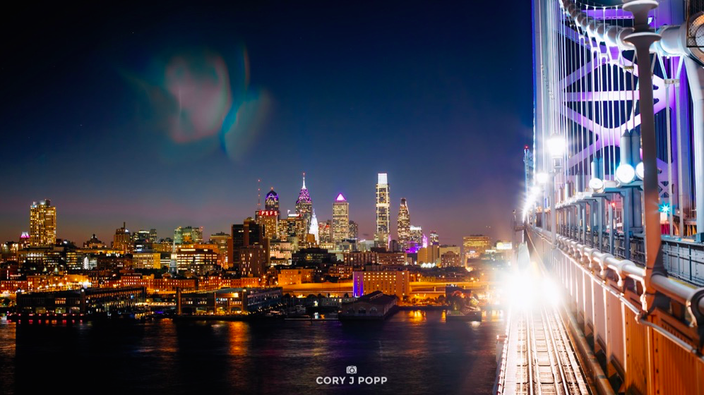 However, that whole traffic dynamic on the Philly side of the Ben Franklin is gruesome compared to the immediately available highway access on the western end of the Walt Whitman.

Now, I don’t commute from Jersey, so I can’t speak to a traffic-volume comparison – beyond knowing that the Walt is used by more vehicles on a daily basis – but if you asked me, which you did, I’ll stand with the Ben over the Walt any day.