What would Mayor Kenney do?

Will his record appeal to progressive voters? 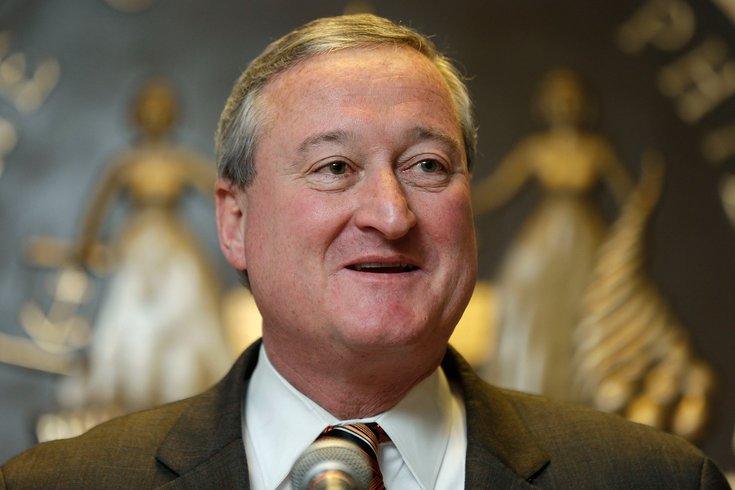 It was the last session of City Council before the legislative body broke for the winter holidays, and At-Large Councilman James Kenney had a problem: he couldn’t seem to decide whether to vote ‘yay’ or ‘nay’ on a bill that would drastically increase the penalties for skateboarding on monuments – notably, a veterans memorial that had become a popular skating spot – to include even possible jail time.

The skateboard regulation, although it had been contentiously debated in Council hearings, was going to pass with or without Kenney’s vote, but it wasn’t going to pass unanimously: Philadelphia’s skateboarding community had shown up, in droves, to oppose the regulation as harsh and anti-youth, and those arguments had found sympathetic ears among several Council members.

“Given the current field of mayoral candidates, one would look to Kenney as a possible candidate progressives can get behind.” -- Sam Durso, of Philly for Change

“I can’t vote against it,” Kenney announced when the bill finally came up for a vote, citing his support for veterans who had showed up to support the bill, “but the jail time makes me not be able to vote for it. So I will be abstaining on this vote.”

It was a non-decision – and one that Council President Darrell Clarke said wouldn’t fly.

“I’m not feeling that,” Clarke said. “We … will continue to have very difficult votes that we have to take. I don’t feel comfortable, if you get a tough vote, you decide, like, not to have to vote. I mean, that’s your whole point for being here.”

It was not perhaps a defining moment for Kenney, who served on Council for more than 20 years before announcing his retirement last week in order to run for mayor of Philadelphia. Kenney "officially" announced his candidacy Wednesday afternoon.

But it was a moment, and one of many in which, as Clarke pointed out that day, Kenney as an elected official has had to take a stand (or, in this case, decline to take a stand). In this particular case, and facing a Council President who wouldn’t let him abstain from voting on the skateboarding bill, Kenney tried the next best thing: rather than cast the vote, he simply walked out of the room.

The bill passed 12-4, Kenney’s 17th vote lingering somewhere out in the hallway.

Kenney’s (presumed) opponents, of course, do not have the advantage or disadvantage of a long record of votes on City Council. Mayoral candidate State Sen. Anthony H. Williams does have a decades-long voting record in Harrisburg; and former District Attorney Lynne Abraham has run for re-election and withstood the public scrutiny of City Council many times. Candidates Doug Oliver, a former press secretary for Mayor Nutter, and Nelson Diaz, a former Court of Common Pleas judge, so far remain lesser-known quantities, ideologically at least. But all of those candidates’ stances on the issues that will emerge over the next two months will bear plenty of scrutiny.

But Kenney’s record on Council, meanwhile, let's us get a head start on evaluating this would-be mayor and how he’s taken on the same kinds of issues likely to face a Mayor Kenney, should he prevail.

It also at least helps answer a question that many Philadelphians excited for Kenney’s anticipated run have been asking in the past two weeks: whether, and to what extent, Kenney can bill himself as the race’s "progressive" candidate – a label that, however squishy and subjective and hard-to-define, will matter a great deal in this election.

Nutter, after all, was elected partly on a surge of votes from "progressive" voters; and while other candidates may try to claim that mantle as well, it will be hard for some of them. Williams' positions on pro-voucher legislation and his close ties with the pro-school privatization Susquehanna Group, will hurt him with many progressives in a race in which Philadelphia’s school district will be so central an issue. Abraham's history of tough-on-crime rhetoric and her many run-ins with accusations of racial insensitivity are anathema to traditional liberals. How Oliver and Diaz will project themselves remains to be seen.

“It’s not like we’re against Kenney, and he’s done some good things for workers," Gilman says. "But he’s been inconsistent.” -- Gloria Gilman, former chair of the Philadelphia Democratic Progressive Caucus

Kenney, at least right now, looks like the candidate best poised for the "progressive" nomination.

“Given the current field of mayoral candidates, one would look to Kenney as a possible candidate progressives can get behind,” acknowledges Sam Durso, co-chair of the group Philly for Change, which endorsed Nutter for mayor in 2007.

But Durso's still using the word "possible" for now.

Gloria Gilman, a former chair of the Philadelphia Democratic Progressive Caucus and executive director of Neighborhood Networks, a group which advocates for a variety of left-leaning causes, says members of her coalition are interested in Kenney, too – but not sold yet. In fact, she notes, her group met recently with Diaz and is eyeing him as their "progressive" of choice as well.

“It’s not like we’re against Kenney, and he’s done some good things for workers," Gilman says. "But he’s been inconsistent.”

In some cases, Kenney’s "progressive" credentials would seem unimpeachable.

There is, of course, the recent bill he sponsored and pushed to effectively decriminalize the possession of small amounts of marijuana in Philadelphia – a proposal at which the Nutter administration initially balked, with Nutter eventually signing the bill in a compromise that leaned decidedly toward Kenney.

And if the timing of that proposal seemed suspiciously close to the rumors of a potential mayoral bid, it was hardly the first time Kenney took up the cause of Philadelphia liberals.

Kenney has won many accolades from Philly's LGBTQ community for his work around hate crime legislation. He was the first sponsor of a bill calling upon the Nutter administration to end the practice of police officials sharing information, including names of witnesses and victims, with Immigration and Customs Enforcement officials. Along with his longtime Council buddy, Councilman Frank DiCicco, Kenney supported bills that would ban, then tax, plastic bags in an effort to reduce litter in neighborhoods – an effort that was opposed tooth-and-nail by powerful industry interests. He supported campaign finance limits, sponsored by then-Councilman Michael Nutter, aimed at reducing the influence of powerful interests in local elections. 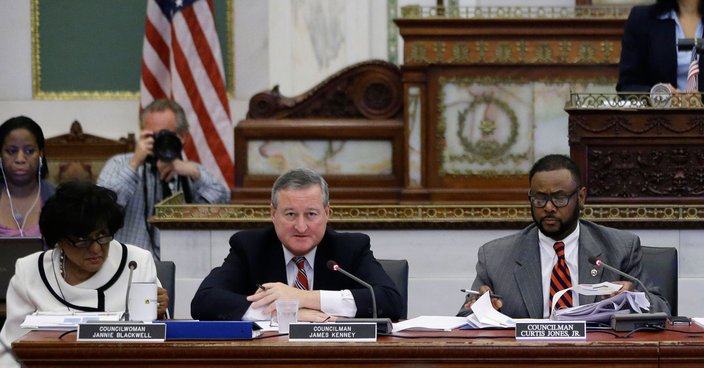 On City Council, Jim Kenney often took up the cause for Philadelphia liberals. (Matt Rourke, File/AP)

But when it comes to other "progressive" causes, Kenney’s had a more complicated record.

Then again, Kenney now says that he would vote for the same bill “this time around,” Hitt noted – a hypothetical vote, since Kenney has resigned his seat and won’t be voting “this time around” anyway.

The appetite Kenney had to oppose Big Plastic when it came to the proposed plastic bag legislation didn’t translate to an interest in fighting Big Soda to support Nutter’s desired sweetened beverage tax. The mayor's proposal, to be fair, became entangled in broader politics around the budget and school district. Kenney “wasn’t convinced that the tax would have the desired change in behavior, and concerned all it would do is add an economic burden,” writes Hitt.

There are plenty of other issues with which we could try to gauge Kenney, though what his positions on them say about his ideology might mean different things to different people. Kenney’s vociferous siding with the city’s firefighters in several battles with the Nutter administration might be seen as progressive to labor advocates (or to firefighters) while not so much to city hall "reformers" who feel the city’s contracts are too generous. While Kenney did support and voted for campaign finance reforms introduced by then-Councilman Michael Nutter, he then changed his mind, proposing (and eventually withdrawing) legislation that would have overturned those very limits in the 2007 mayoral race. The moral might not be the same to everyone: Kenney defended his about-face at the time saying that the rapid ascension of millionaire Tom Knox as a mayoral candidate led him to believe that the campaign finance limits had in fact made the race less democratic.

Whether or not Kenney is everything a "progressive" voter would want him to be, he hasn’t, at least, shied away from the conversations progressives want him to have.

Before Facebook and Twitter became the mediums of choice for online banter around Philly politics, many of the city’s politically engaged, self-described "progressives" hung out on the web forum YoungPhillyPolitics.com, where members posted and contributed to discussions and engaged, often, in spirited debates over the politics of the day.

Among those members was Kenney himself, who frequently popped up in discussions, generally up for a challenge: Kenney appeared on the site frequently to debate his own campaign finance proposal and myriad other matters.

Philly for Change’s Durso, a frequent commenter on the site, remembers being impressed by that. “Just the fact that he cared enough to do that,” he says. "We certainly butted heads on some things, but he seems to listen. He was in dialogue with the city’s progressives.”

And Kenney does seem to get cred – if, sometimes, a little begrudgingly - for his willingness to engage. When one YoungPhillyPolitics user commented that Kenney’s posts were “not very constructive,” and urged him to “chill,” Kenney’s reply was, if nothing else, an unmistakably Kenney one.

“My comments are honest,” he wrote. “So, why the need for me to chill?"