Asteroid on course to fly near Earth 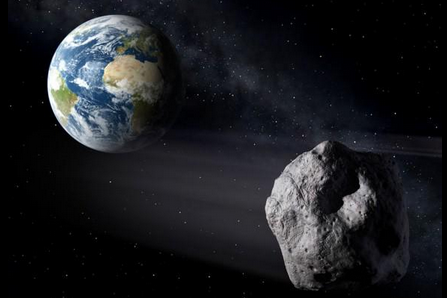 The asteroid, known as 1999 KW4, will fly past Earth on Saturday night from roughly 3.2 million miles away.

Read More
When nearby asteroids aren't projected to cause the imminent and catastrophic destruction of Earth, à la "Seeking a Friend for the End of the World," they can actually be rare marvels to observe.

On Monday, an uncommonly large asteroid, named 2004 BL86, will pass over Earth at a distance of about 745,000 miles, making it the closest call on Earth for the next 13 years. To put it in perspective, that's about three times the distance between Earth and the moon.

CNN reports asteroid 2004 BL86 is about a third of a mile in size and can be observed independently using a strong pair of binoculars or a backyard telescope. For those who plan to spot its appearance, areas outside of heavy light pollution will provide the needed clarity, while any time past midnight, once the moon has set, will be the best chance to do so.

For astronomers, the asteroid offers an excellent research opportunity. NASA scientists will collect radar data using the Deep Space Network antenna in Goldstone, California, and a second antenna at the Arecibo Observatory in Puerto Rico. The information will be used to create the first detailed images.

"Asteroids are something special," said Don Yeomans, manager of NASA's Near Earth Object Program Office in Pasadena, California. "Not only did asteroids provide earth with the building blocks of life and much of its water, but in the future, they will become valuable resources for mineral ores and other vital natural resources."

For those interested in watching the asteroid online, the Virtual Telescope Project 2.0 will be hosting a live event on Jan. 26.