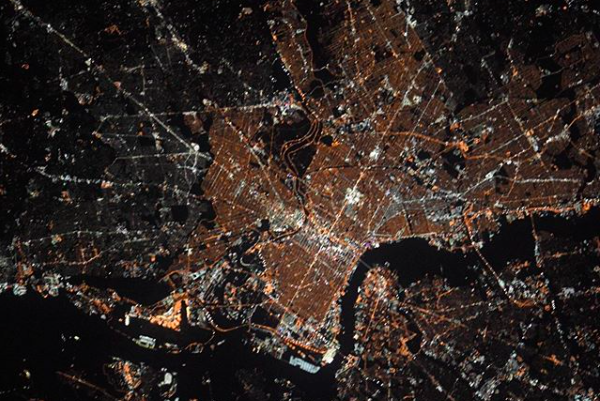 Astronaut Jessica Meir took a photo pf Philadelphia from the International Space Station, shouting out cheesesteaks and the Liberty Bell from above. Meir is currently aboard the ISS for NASA's Expedition 61 and 62.

An astronaut on the International Space Station paid tribute to Philadelphia on Thursday with an incredibly clear aerial view of the city at night. Watch out for drool with this one.

Jessica Meir posted the photo below on Twitter and Instagram, providing a snapshot of Philly from about 254 miles above Earth.

Cheesesteaks, the Liberty Bell, and brotherly love – what’s not to like about glittering #Philly? Goodnight #Philadelphia! #GoodnightFromSpace pic.twitter.com/eVhRMPVm8Z

As some have pointed out on social media, it's impossible to miss the glaring bright spot of Temple University's campus on North Broad Street. It's more salient than the light from Center City. Also fascinating: The Benjamin Franklin Bridge looks like a tiny, dimly lit strip from above compared to its presence from ground level.

Meir drew national headlines last year when she took part in NASA's first all-female spacewalk to replace a power controller on the ISS. She conducted the 7-hour mission alongside colleague Christina Koch, who happens to be a Philadelphia Eagles fan. Koch tweeted an image of herself on the ISS watching the Eagles defeat the Dallas Cowboys while on the ISS last December.

Over the last few days, Meir has been tweeting other East Coast cities from space as well, including Boston and New York City.

Last week by day, and this week by night, either way #Boston beholds quite a sight. Goodnight Boston! #GoodnightFromSpace pic.twitter.com/xIZL9Grxw1

Meir's photo of Philly offers a much more defined view of the city than an image shared a few years ago by astronaut Shane Kimbrough, who also got New York City and Atlantic City in the frame.

Meir holds a Ph.D. in Marine Biology and has conducted research for NASA on the physiology of animals in extreme environments. She's currently on board the ISS as part of NASA's Expedition 61 and 62.