At Philly FedEx facility, packages don't hang around for long

"In and out – that's the game plan," says a manager on a recent early-morning tour 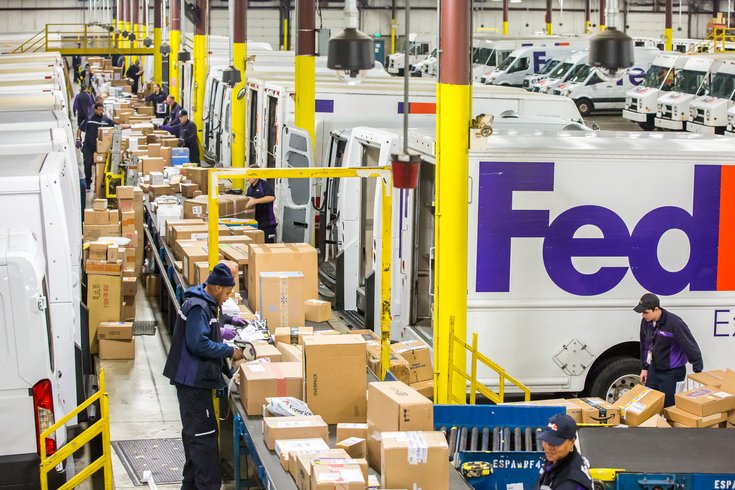 Inside the FedEx shipping center in South Philadelphia, employees label packages on a conveyor belt before loading them onto delivery trucks. The facility processes as many as 25,000 packages a day during the busy holiday season.

The deluge of parcels begins immediately after Thanksgiving.

And it doesn't cease until Christmas Day – a month-long stretch that brings hundreds of thousands of packages into the FedEx shipping center in South Philadelphia.

The facility, located on Grays Ferry Avenue, services the entire city and portions of Delaware County. Many of the packages that arrive during this busy season will end up as holiday gifts.

"On a normal day, we get 15,000," senior manager Suzanne Martin Short said. "This time of the year, we'll do 25,000 during our busiest days. ... e-commerce pretty much drives that additional volume during the holiday season."

Most of those packages only spend a few hours at the FedEx facility before being shipped to a business or – more frequently at the holidays – a residence. But some of them are only inside the shipping facility for mere minutes.

"Some of them are 20 minutes – the packages that come in on the latest arriving aircraft," Short said while giving PhillyVoice a tour on Monday morning. "We do start to get inbound volume at 5 a.m. Today, we'll hope to have every one out by 8 a.m. So, it's not long.

Every day, four or five FedEx planes carrying containers filled with parcels land at the Philadelphia International Airport. Those containers – which are molded to fit the curvature of the aircraft – hold as many as 450 to 500 packages, depending on the size of the shipments.

Once loaded onto tractor trailers and transported to the FedEx plant, containers by the dozens wait to be emptied onto two conveyor belts.

One belt mostly handles shipments to Philadelphia; the other directs packages en route to Delco. 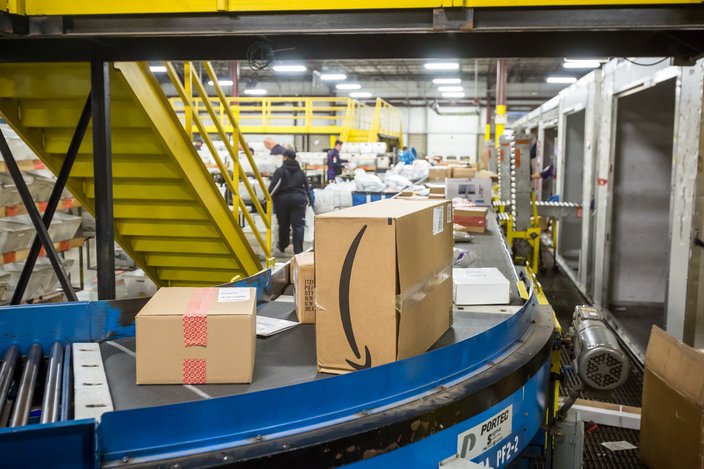 After packages from Amazon and other online retailers arrive at the Philadelphia International Airport they are brought to the FedEx shipping center along Grays Ferry Avenue, where they begin the process that will land them on trucks for delivery. Some parcels are in the facility for less than 20 minutes.

On Monday, FedEx personnel unloaded six containers at a time, tossing packages onto a conveyor belt where a trio of co-workers ensured the shipping labels were facing up.

Some 16,000 packages were expected to go out – a 20-percent increase from a typical Monday.

Farther down the conveyor belt, additional staffers scanned the bar codes before slapping another yellow label onto the parcels.

That label typically includes the route number, stop number and expected delivery time – critical information for the couriers, who load the packages into the appropriate delivery trucks. 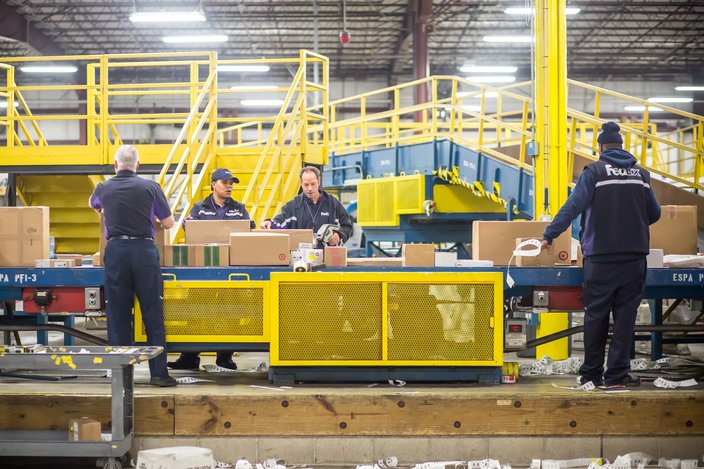 "In a lot of cases, it says exactly what stop number it should be," Short said. "It's going to a route in Springfield, Delaware County and it's going to be their 49th stop of the day. That's based on the service that the customer asked for."

The delivery trucks lined the length of the facility, doors propped open as couriers gathered the packages needed for their routes.

The FedEx shipping center can hold some 140 delivery trucks – and at this time of the year, it needs them.

On a typical day, 95 drivers deliver the packages. The holiday rush requires 135 or 145 drivers. 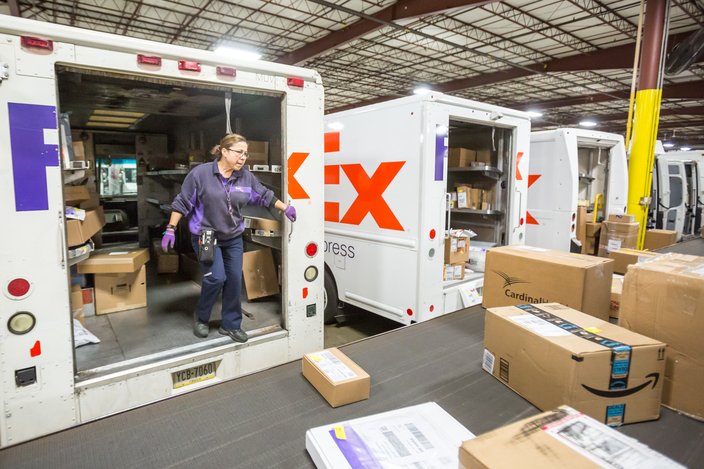 As packages travel down a conveyor belt, a FedEx worker places the boxes assigned to her delivery route on shelves inside her stepvan.

Most of the morning routes include regular customers who consistently order packages throughout the year. But throughout the holiday season, the afternoon routes are flooded with e-commerce packages.

"In the morning when we come in, we actually get a look at what each route is going to get," Short said. "We know if we need additional staffing, or if we have too much staffing, so that we can meet our service commitments."

The couriers scan the packages before loading them into their trucks, where the packages are placed on shelves corresponding to their delivery number.

At every step, the packages are scanned so that FedEx officials can see who handled them – and consumers know exactly where their package is on its journey. 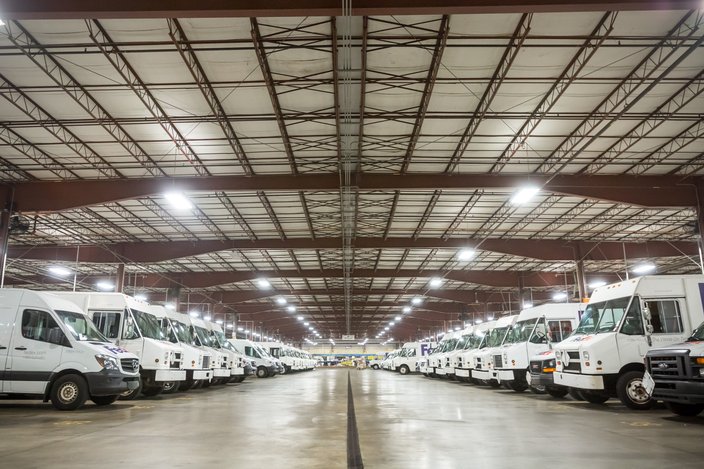 The FedEx shipping center in South Philadelphia accommodates about 140 delivery trucks. Dozens are loaded simultaneously as FedEx workers process as many as 25,000 packages daily during the holiday shopping season.

Once loaded onto the truck, it shouldn't be long before a package arrives at the consumer's door.

Come Dec. 26, the pace finally slows – though not as much as it once did.

"It's a dropoff, but it's not like it was before e-commerce," Short said. "We always had the catalog customers before the Internet. But now with e-commerce, it's busier."

After all, people have presents to return and gift cards to spend.