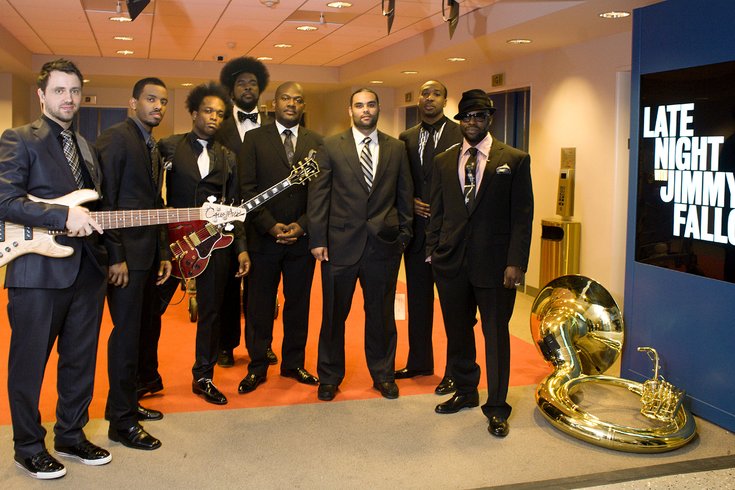 The Roots will have a portion of East Passyunk Avenue named in the band's honor. The Grammy-Award winners and the house band for late-night host Jimmy Fallon since 2009, include founding members Tariq 'Black Thought' Trotter and Ahmir "Questlove" Thompson, who met while students at Philadelphia High School for Creative and Performing Arts.

The Roots, Philly's hip-hop group and the band for "The Tonight Show with Jimmy Fallon," will soon have a block of East Passyunk Avenue dedicated in their honor, seemingly to the surprise of the band's leader, Questlove.

Philadelphia City Council passed the resolution to rename the portion of the street during Thursday's meeting, and by Friday morning, the East Passyunk Avenue sign near South Street had already been changed to include the line "Avenue Of The Roots" at the bottom, BillyPenn reported.

Officially, the resolution will be voted on at City Council's meeting on Feb. 27, but most of these honors are a done deal when they are introduced.

The Avenue Of The Roots will cover one block of East Passyunk between South Street and Bainbridge. Councilmembers Kenyatta Johnson, Cindy Bass and Maria Quiñones-Sánchez sponsored the legislation to make the name change. The block will be christened in May at a street-naming ceremony.

Drummer Questlove found footage of City Council reading the street-naming proposal and excitedly posted it to Facebook, adding "does this mean WHAT I THINK IT MEANS!!!???!!!??? hell of a way to find out!!!! WOW!!!!!"

Red signs indicating dedicated streets exist throughout Philadelphia; among the roadways honoring musicians are "Boyz II Men Boulevard," "Patti LaBelle Way," and "Gamble and Huff Walk." The placards are usually placed in areas where these musicians got their start.

City Councilmember chose the particular Queen Village block to recognize The Roots' history as buskers there before their rise to fame. They were known to sing to passersby on the block, as well as other locations in the city.

The Roots are a Grammy-Award winning band, and have served as the house band for late-night host Jimmy Fallon since 2009.

In addition to getting this honor, The Roots will be back in Philadelphia for their annual The Roots Picnic music festival in Fairmount Park, where they'll share the stage with Meek Mill, Summer Walker, DaBaby, Thundercat, DJ Diamond Kuts, and more.