Can Sriracha save these feeble fries?

By Bryan Bierman
PhillyVoice Contributor
Bad For You Food
from 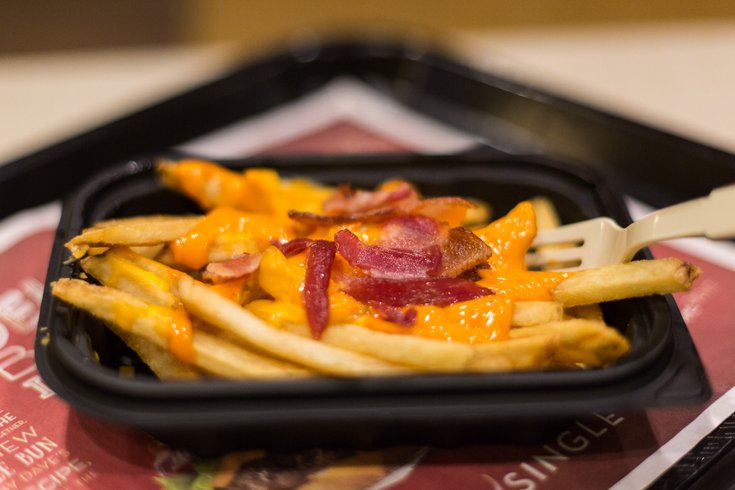 If you're the kind of person that wants to eat french fries as a meal- this may be your opportunity.

In the past decade, there’s been no greater food success story than Huy Fong’s Sriracha sauce (Tương ớt Sriracha).

More than just a condiment to its rabid fans, it’s become a cult-like obsession. One of my roommates, for instance, has a Sriracha bottle-shaped pillow and Halloween costume. Many other fans flock to take tours of the California production facility. A few months back, a local chef got in some hot water after suggesting pho-lovers ease back on the sauce. For some reason, Lexus even recently made a special edition Sriracha sedan.

The mastermind behind Sriracha is David Tran, a man whose remarkable story has intertwined the sauce into an American tale of success. Growing up in Vietnam, Tran and his family made spicy chili sauces in their home and would deliver them by bicycle to local businesses.

By 1978, after communists had overthrown Vietnam, hundreds of thousands of people were fleeing the country. Because of escalating tensions with China, the Hoa – the ethnic Chinese people of Vietnam – which included Tran and his family, received extreme persecution. The family soon fled, splitting up their escapes to different countries before eventually regrouping in America the following year.

Based out of Los Angeles’ Chinatown, Tran started his sauce company in 1980. He named it Huy Fong, after the refugee freighter from which he fled Vietnam. Tran first created his special Sriracha a couple of years later, a unique spin on a Thai red jalapeño chili-pepper dipping sauce. The company originally made most of their money from neighboring Chinese restaurants, but over the ensuing decades, the sauce’s popularity began to spread.

Sometime in the 2000s, Huy Fong’s Sriracha in the United States caught on in a big way. Being a cheap, but very powerful sauce, it became a staple for many Asian restaurants and lovers of spicy foods. It has since become a juggernaut of the condiment industry, selling tens of millions of bottles each year.

Fast-food companies, with that “Millennial” dollar in their sights, have attempted to join in: KFC tried its hand at Fiery Sriracha Chicken, Subway made a Sriracha melt, and earlier this year, McDonald’s tested out a Sriracha Big Mac.

Wendy’s has gotten in on the fun™ with their Sriracha Chicken Sandwich and Bacon Sriracha Fries. To advertise this un-momentous occasion, Wendy’s released commercials showing people’s love for the sauce. They get tattoos, paint their chests in celebration and have all of the sriracha bottle-shaped memorabilia. The tagline is Wendy’s is “fluent in sriracha,” so they also released a version where the announcer just repeats the word “sriracha” over and over again.

Here’s the deal, though—they didn’t use Huy Fong’s Sriracha sauce. Since “sriracha” is not trademarked, anyone can make their own version of the sauce, and since they don’t have the rights, all of the sriracha tattoos and memorabilia in the ads aren’t of the bottle, but of a lookalike. All of this “sriracha” fluency they spoke of was meaningless. Now, it all seems like a stupid marketing slogan.

No one’s getting a tattoo of a fake sriracha bottle. They’re getting the rooster. If you want to not pay to use real “cock sauce” – I get it – but don’t then try to trick me by waving a fake cock in front of my face.

As a counterpart to its Sriracha Chicken Sandwich, Wendy’s Bacon Sriracha Fries are topped with cheese, bacon and a sriracha aioli. Having had poutine recently, I thought I would try the fries. 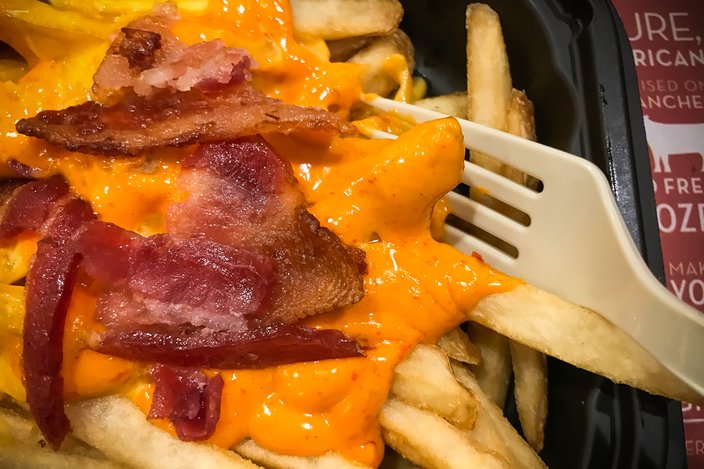 The Sriracha Bacon Fries from Wendy's.

Now is probably the time to mention this. I don’t like Sriracha. There’s no way of doing this review without admitting this, because I feel I’d be lying to you if I didn’t. It’s too hot. I can take a little spice, but if my eyes are watering and my mouth is on fire, that’s not an enjoyable meal to me. That’s a tiny form of torture that I just paid for. (Frank’s RedHot, though, I will eat all day.)

However, I’m a journalist, and I’ve previously had to objectively eat barf jelly beans. I can do this. Plus, it’s a sriracha aioli and aioli means they put mayonnaise in it, and if anything can make something taste good, it’s mayonnaise.

I would have to say, objectively speaking, this tastes like hot garbage.

The fries were covered with the sickening sauce, a piece of bacon ripped in half and tiny shredded cheese parts that didn’t melt in the microwave.

The creamy sriracha aioli had a strange and awful sourness on top of its too-hot-for-my-sensitive-little-baby-tastebuds spiciness. This was painful and weird. The bacon wasn’t diced like it should have been, so I never really got a sense of the bacon amongst everything else. The few unmelted pieces of cheese added nothing.

I admittedly am not a fan of the regular version, but I can see this disappointing diehard sriracha fans as well. This has to work better on the chicken sandwich than it does here. It’s a shame, as Wendy’s “natural-cut” fries are very good. After changing their recipe in 2010, their sea salt-sprinkled fries have set them somewhat apart in the fast-food fry game.

Verdict: No. This tastes how a hot pet store smells. I will stick with mayonnaise.

Bonus Horrorshow: The Wendy’s location downtown at 15th and Chestnut has this creepy doll of Wendy that stares into the street. She has no smile and eyes that say, “Please release my trapped soul from this thousand-year punishment.” Luckily, she is away from where people eat. 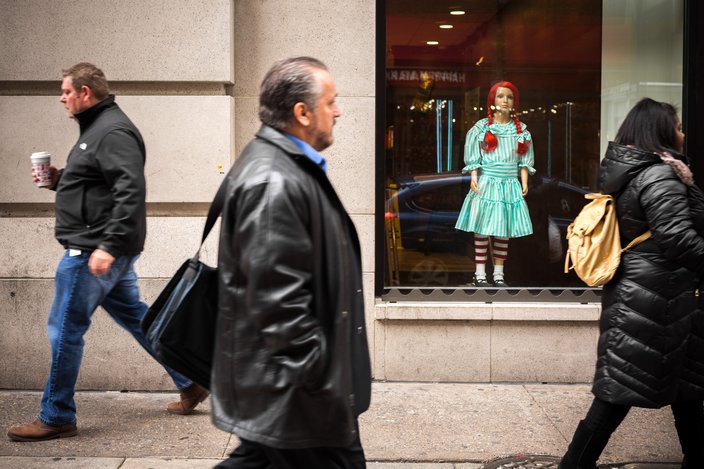 A creepy Wendy stares out of the window at the 15th and Chestnut location.