In the spirit of '90s nostalgia, Philly candy company re-releases the Wonder Ball 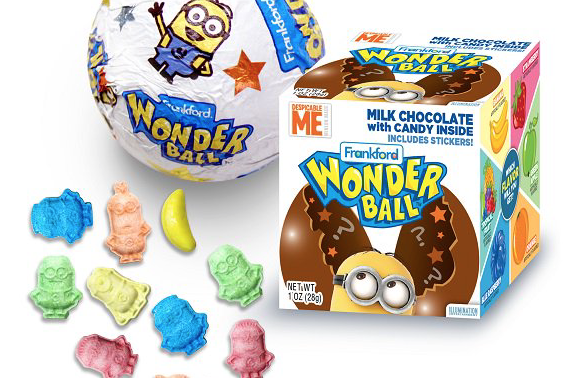 Outside of Warheads, the Wonder Ball may be one of the most famous novelty candy products of the '90s. And thanks to a Philly candy company, it's made its way back to store shelves.

Frankford Candy Company, based out of a warehouse in Northeast Philadelphia, quietly stocked Walmart store shelves with a new edition of the Wonder Ball – that is, a hollow chocolate ball with a surprise treat inside. It happened earlier this year. The company obtained the rights to the candy in 2003 after Nestle sold the brand – likely a result of some public backlash over its toys inside being a choking hazard. (The toys inside have since been replaced with candies.) Frankford, if you don't know, has been around since 1947 and built its candy brand on seasonal items, like chocolate Easter bunnies and interpretations of Santa Claus.

Here, Molly Jacobson, director of marketing for Frankford, explains what prompted the company's interest in bringing the Wonder Ball back, their big-name partnership for the product and how the Wonder Ball-obsessed can win a truckload of the quirky chocolate balls.

Wonder Ball was originally a Nestle product. What’s the history behind how Frankford got involved?

Yeah, you’re right – it was a Nestle brand in the 1990s and early 2000s. Frankford acquired the rights from them in 2004 and launched it under the 'Spongebob Squarepants' brand. It had lots of success on the market for several years, and then, in 2005, it was pulled from the market. In the years since then, there’s been demand from consumers to bring back the Wonder Ball. We found 400,000 social media fans prior to our relaunching this year, all trying to raise awareness to bring it back. It’s a beloved brand, really with millennials who’ve been excited to have it back on the shelf.

The allure is its nostalgia for the ‘90s, right?

Absolutely. And what's happening in the candy and toy industry right now is the ‘surprise factor.’ We found a lot of interest in bringing a touch of surprise and curiosity back to the market – with candy.

When did you know you wanted to bring this back?

I think it's the 1990s nostalgia. And the kids and teens who grew up in the ‘90s, they’re now having kids. So the timing felt right.

What’s the difference this time around?

Why the 'Minions' partnership?

It’s relevant right now. It’s fun. It reaches a large consumer base. A lot of people are fans of 'Minions.'

Any brands you'd pair with for the future?

We have lots of ideas for different brands to partner with, but nothing I can talk about yet.

You paired with Walmart to distribute these. That's a big win, right?

We’re at the front-end register at Walmart and they’re flying off the shelf. We introduced them in March 2016. It’s been a lot of fun. If you look on social media, there are shopping carts full of products out of fear it won’t be on sale long. And I think it’s good for us to see that quiet relaunch. It plays up the surprise and mystery factor, in a way. We want people to find it.

How about the chocolate itself? What’s the selling line there?

It’s a fun, sort of two-piece chocolate ball with the candy on the inside and the creamy chocolate center that keeps people interested.

YALL THE WONDER BALL IS BACK pic.twitter.com/IEPygnmKhz

In between ceasing production of the wonder ball and now this, what’s been the focus in between?

Spongebob Crabby Patties have been our No. 1 candy for years. They see success. And we have candy for the four major holidays – Halloween, Christmas, Easter and Valentine’s Day – across a large number of entertainment and food brands.

I don’t think a lot of people know Philly has a candy company.

You know, Frankford is heading into our 70th anniversary next year, so we’ve been in the Philly area a long time. A lot of people, when they visit the factory, are surprised and excited to see we produce chocolate here and have been a local institution a long time. It’s certainly a local thing that Philly loves about Frankford as a brand.

Is it tough to be a candy manufacturer here? It’s an interesting place to be for it.

I wouldn't say it’s tough. Our building is 500,000 square feet, so we have a lot of room to grow, and it’s nice being an industrial producer here within Philly.

Right now we have our 'Wonder Ball is Back' contest. The sweepstakes runs through Dec. 16, where one lucky winner will be drawn to win 500 custom Wonder Balls – and by custom, I mean on the website, fans are asked to create their own custom Wonder Ball by choosing their favorite character and favorite flavor. We will choose one lucky random winner from those entries and deliver to them 500 Wonder Balls of their creation. So, right now we have received submissions from 45 states. Three weeks into the program, we have total impressions of 325,000 people. We’re excited about reaching Wonder Ball into the hands of not just superfans, but all families.

Where else can you get it?

It's available in Walmart and local grocery stores, specialty stores and many more to come. Retails for $1.29.