Bad For You: Wendy’s Taco Salad

By Bryan Bierman
PhillyVoice Contributor
Bad For You Taco salad
from 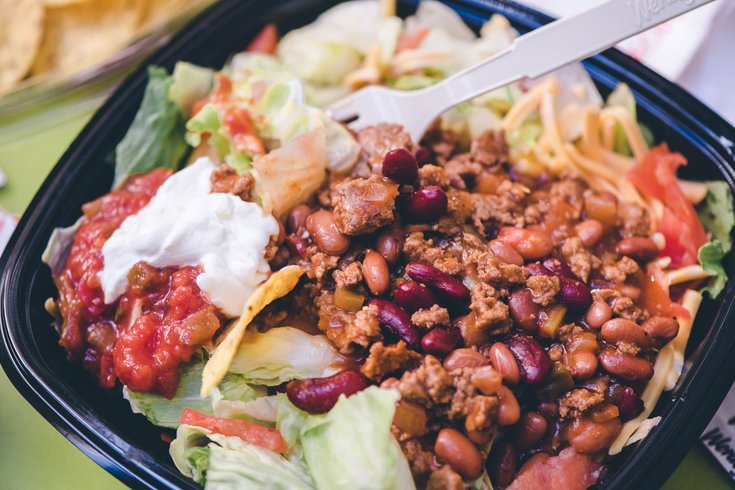 There’s a recent Domino's commercial in which a chain spokes-employee is inside a family’s home, chastising a certain “Sally Soulsmasher” (the mom) for making salads for dinner. The rest of the group would rather order Domino’s, you see.

“Eat a pizza once in awhile,” the spokes-employee yells in her face.

The ad goes on to explain that the company now offers salads on their menu, so the “lettuce lovers” — portrayed exclusively by females — can’t veto “pizza night” any longer.

It’s a funny commercial, almost exclusively for how hostile the company is with anyone who would order a salad over pizza. I’m not sure if open disgust is a good tactic for getting customers to buy your terrible-looking salads, though.

It’s also not pleasant to imagine these presumably indoctrinated greens-hating employees preparing these loathsome foodstuffs, handing you your salad like, “Here, we all spit in this. GO KICK ROCKS, YOU DUMPSTER!”

For many people, pizza is better than a salad. However, there are some who would rather have a salad than pizza. It’s stuff like this that makes the world go 'round, folks.

Instead of fighting salads, perhaps Domino’s could learn from other restaurant chains and embrace the green. In theory a healthy meal, salads have long infiltrated the junk food world and made it their home. Many salads might sound healthy-ish but are really packing hundreds, even thousands of calories.

One of the precursors to the junkifying of salads is Wendy’s Taco Salad, first introduced in 1982 . Lettuce, diced tomato, cheddar cheese is topped with chili, then the customer can add round tortilla chips, salsa and sour cream as they please.

The product was a customer favorite for many years. Wendy’s founder (and dad) Dave Thomas even said it was “the best in the bidness.” The chili-topped treat remained on the menus until the early ‘10s when it was replaced by the similar but different Baja Salad. (The Baja Salad had pepper jack cheese, tortilla strips, guacamole and a creamy jalapeno dressing.)

Apparently, there was a large public outcry for the Taco Salad, so Wendy’s did the thinkable by bringing it back. 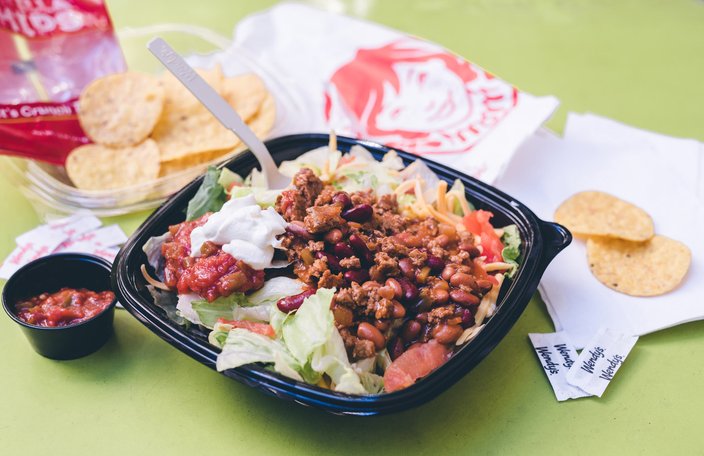 Here’s where it gets mildly interesting: The re-release of the Taco Salad has been completely marketed as a throwback to the ‘90s. A series of ads entitled “We Need To Taco” feature teenagers embarrassed by their parents bringing back other styles from the decade, like frosted hair tips, saying “Talk to the hand!” and using dial-up internet.


Using the ‘90s as a marketing scheme is a somewhat common way to boost sales nowadays. It was the entire point of the relaunch for Crystal Pepsi, detailed in a previous Bad For You.

The main difference between the two campaigns is that Crystal Pepsi was around for a few short years in the ‘90s, whereas Wendy’s Taco Salad had been around since ‘82.

In an effort to grab a quick nostalgia sales bump from a targeted demographic — the ones old enough to have grown up in the ‘90s — Wendy’s has painted the Taco Salad in a particular light as if it was a linchpin of ‘90s fast food. In reality, it was around years before that and up until about five years ago. You can bite into one and think, “Wow! Eating this brings me right back to ages 6-34!”

In (I guess) more important news, the Taco Salad is pretty darn good.

An immense reason is Wendy’s chili, which is one of the hamburger chain’s best items. Not many fast food restaurants offer not-as-a-topping chili, so Wendy’s has kept its own little drive-thru niche.

Wendy’s chili has a great base of meat and spices, plentiful beans and onions, especially if you add some of their Hot Chili Seasoning. It has a thin viscosity, almost like a soup, which usually doesn’t work for chilis. When poured over the iceberg and romaine lettuces, it’s a perfect cornerstone to the dish.

The sour cream was very thick and savory, as was the shredded cheddar cheese. Instead of the usual thinly cut slices, the cheese sticks weren’t cut as close, leaving bigger bite-sizes. Bold choice, Wendy’s salad chef.

The actual “taco” part, if you will, were the round tortilla chips. Maybe it’s different when you get take-out and not dine-in, but I didn’t realize that I would be “assembling” the actual salad. It comes with a bag of chips, ancho chili salsa in a plastic container and a container of sour cream. The salsa and sour cream make sense. I also figured that the tortilla chips would “installed” by whoever made the salad, all mixed in like it looks in the ads. Instead, I’m trying to figure out where I should place the chips.

Do I dip them? Do I crumble them?

Then I realized complaining about having to put chips into a fast-food salad was a new level of laziness, so I just jammed them in there and enjoyed myself.

Taco Bell’s Taco Salad comes in its own tortilla bowl so you don’t have to make these decisions, though. Just saying.

Verdict : Pretty good, though still not pizza. Or tacos.