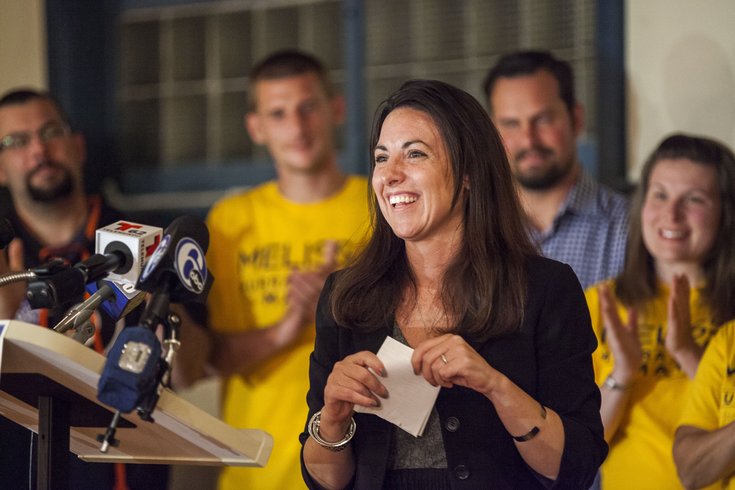 After months of campaigning as an upstart Republican in a city that leans heavily Democratic, Melissa Murray Bailey walked into the United Republican Club Tuesday night with a broad smile across her face.

As predicted, Bailey fell well short of the votes needed to topple her Democratic opponent, Jim Kenney, who will succeed Michael Nutter as Philadelphia's 99th mayor. (She captured 13 percent of the vote, according to unofficial tallies.)

But she ran a campaign that Republicans hope will boost interest in a mostly dormant party.

"From a standing start last winter, we put a new face on the Republican Party of Philadelphia," Bailey said to a crowd of supporters. "It's a face that we can all be proud of. We've touched so many parts of this city, especially those that have been the most neglected."

Bailey, a first-time political candidate who switched her registration from Democratic shortly before declaring her candidacy, ran a campaign that called for improving education, bringing sustainable jobs to Philadelphia and making Philadelphia more business friendly.

Despite facing a 7-to-1 disadvantage in voter registration, Bailey and her staffers insisted they only sought to gain the 51 percent needed to beat Kenney. Though Bailey missed that mark considerably, her staffers credited her with boosting interest in the Republican party.

"We realized the totals and percentages for Republican candidates have been pretty dismal," campaign staffer Tiffaney Palaez said. "We have no doubt that we at least beat that. ... Philadelphia definitely has a new respect for the Republican Party that wasn't there before. It was pretty shunned. We feel people have opened up to a different perspective."

Bailey's policy director, Tom Kurek, said Democrats, including former Gov. Ed Rendell, told him throughout the day that Bailey had been the best Republican candidate in recent memory. Kurek particularly credited Bailey's debate performance, saying Kenney added some of Bailey's ideas to his own campaign.

Thanks to Bailey, Kurek said, the future looks better for the Republican party.

"In four years, if we're still talking about the same issues, there's going to start being a tipping (toward the GOP)," Kurek said.

But will Bailey remain involved in the Republican Party? She declined to discuss her future plans Tuesday, saying she'll begin mulling them Wednesday.

"I never planned to get into politics," said Bailey, a business executive for the employer branding company, Universum. "I have no idea. I have to talk to my family and have some time to let this pass."

Bailey said the business of her campaign prevented her from fully processing everything it involved. But she said the campaign opened her eyes to the level of improvements needed in Philadelphia.

"The lesson I learned is Philadelphia is worse off than I thought when I started," Bailey said. "It's bad. After doing this, I'm realizing that it's even worse. That's the sad thing. I went home almost every single night and was upset and disturbed about what I was seeing in Philadelphia."

Bailey fought to change that by keeping her campaign issue-driven. As evidence of her campaign's impact, she credited the 200 Comcast call center jobs that the Nutter administration negotiated as part of the city's 15-year-franchise renewal deal.

"This was something that we repeatedly talked about on the campaign that was never mentioned before," Bailey said.

Kenney will work to improve the state of the city when he takes office in January. What lies ahead for Bailey remains unknown, at least publicly.

"After this, we sleep," Bailey said. "Then we decide where we go tomorrow."