Bam Margera opens up about 'mental breakdown' to Dr. Phil

The 'Jackass' star discusses how his son, Phoenix, saved him from almost committing suicide 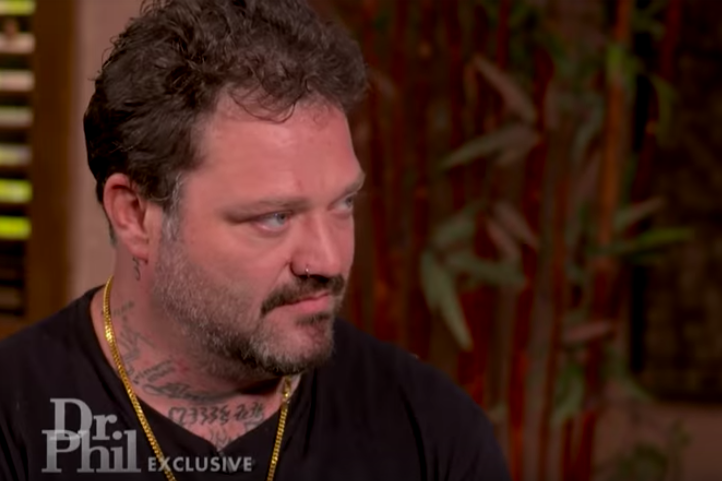 Bam Margera appeared on 'The Dr. Phil Show' on Monday and discussed his 'mental breakdown' and drug usage with the psychologist.

Margera, 38, told Dr. Phil he almost took his life, but it was seeing his son, Phoenix, it stopped him from going through with it. Margera said he would die for for his son, to which Dr. Phil asked if he would live for his son, too.

MORE: You may have racked up big E-ZPass fines and not even know it

“Well, that’s the thing," Margera said. "I had such a mental breakdown that I really thought like I … could just go to the lake and be free. I was like the pain was gone and I had to beg for pain back. I was like, ‘Please just give me back my pain so I could stay because I want to be with him.'"

He added, "If I hadn't seen Phoenix, who knows where I'd be."

Also during the epidsode of the "Dr. Phil Show," Margera partially blamed his mother, April Margera, and wife, Nicole Boyd Margera, for his downward spiral, as had been teased in the in a show trailer released earlier this month. He referred to Nikki as "stubborn," adding, "She either thinks I'm on too many Adderalls, so she looks at my eyes. She's like an FBI agent."

Margera admitted in the interview that he drank champagne on the flight to see Dr. Phil and that every day he takes two, 10-milligram Adderall pills.

Margera's falling out with this mother is linked to his party-centric home, Castle Bam, in Pocopson Township, near West Chester. April Margera renovated the house — which Bam said looked like a "North Philly crackhouse" previously — while he was away and with his permission. But ever since his mother redecorated, the star said he feels like she won't leave him alone about the property.

"If anybody comes in now, she doesn’t want anybody sitting anywhere or doing anything," Bam Margera said. "So I’m like, ‘Hold up, is this your house or mine? Because last time I checked, I bought it, and then it’s mine.'"

April Margera argued back, saying her son "wanted to put his own friends in there, which are the same group that brings him down, and they’re just transient people."

Bam Margera's started drinking alcohol while on the set of "Jackass," he said, as a means to cope with the pain from injuries sustained filming the daredevil show. Margera claimed that he didn't drink at all prior to the show's creation.

Margera talked to Dr. Phil about the death of his close friend and "Jackass" co-star Ryan Dunn. Dunn, 34, was killed in a high-speed crash while driving his Porsche drunk on the Route 322 bypass in West Goshen, Chester County in June 2011. Dunn's alcohol level was reportedly twice the legal limit at the time of the crash.

April Margera said Dunn's death "really exacerbated" Bam's alcohol consumption. He would drink so much he would black out, she said, and then use Dunn as an excuse for behaving badly.

Depression also contributed to his addiction problems, Bam Margera said, describing how he had felt too old to be a professional skateboarder. "Skateboarding is what I love. So, if I can't do that, what's the point?" he said.

Margera agrees to go to therapy at the end of Dr. Phil episode. He has since been in two different treatment facilities. After checking out of the first one last month, Margera got a Dr. Phil tattoo and later was arrested at a Los Angeles hotel for causing a disturbance.

He checked back into rehab upon his release from police custody. It marks Margera's fifth time. On New Year's Eve, the former pro skateboarder announced he was going back to rehab for the third time. After only 10 days in treatment, he wrote an eight-page letter explaining why he decided to leave.

In March, he ranted about his wife and manager on Instagram, resulting in his family committing him to a behavior health facility just days later.