Funds raised from the competitive event will support the Pennsylvania SPCA 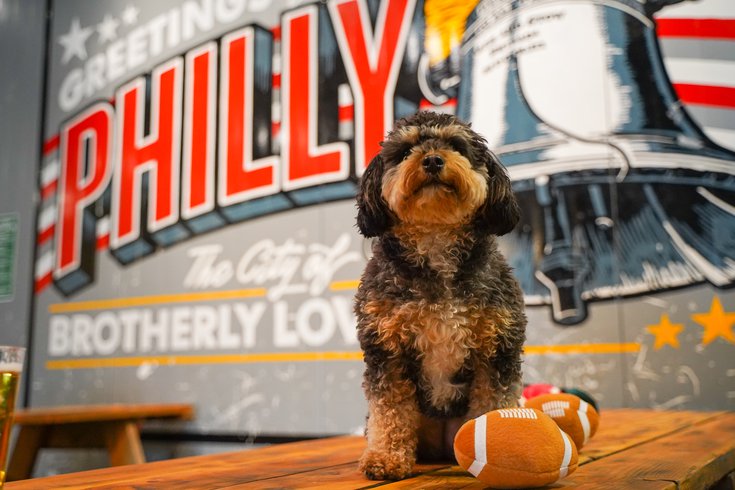 Craft Hall and the Pennsylvania SPCA are partnering up to host the city's first-ever 'Bark Bowl' on Saturday, Feb. 12 from 12 p.m. until 2 p.m. A spin on the Animal Planet 'Puppy Bowl,' dogs from around the area will compete in the indoor dog show. Themed cocktails will be served, with a portion of the proceeds going to support the PSPCA.

We're just one week away from Super Bowl Sunday, where the Los Angeles Rams will face off against the Cincinnati Bengals on Feb. 13. If you're less than excited about the biggest sports event of the year, the Animal Planet's Puppy Bowl will be televised on Sunday at 11 a.m. — hours before kickoff.

For those looking for a different way to celebrate the Super Bowl this year, Craft Hall is hosting its first-ever Bark Bowl in partnership with the Pennsylvania SPCA, inspired by the Animal Planet dog show on Saturday, Feb. 12. From 12 p.m. until 2 p.m., Craft Hall will transform into its own indoor dog park, featuring both competition and friendly fun for dog-lovers and Super Bowl fans alike.

The city's only beer garden and dog park will be open outside throughout the day, and guests can meet some of the dogs and handlers throughout the show. PSPCA will be on-hand with adoptables, and will be available to discuss the adoption process with anyone interested.

"The Pennsylvania SPCA is thrilled to participate in this year's Bark Bowl at Craft Hall," said Gillian Koche, PSPCA director of public relations. "Not only will the event invite dog owners to celebrate the big game, but it will also bring much-needed attention to those dogs still in search of their forever families. We can't wait to introduce families to their new M.V.P.'s (most valuable pups!)."

Dogs will be divided into two teams to compete in a set of three games, plus a Halftime Show featuring the dogs playing around with bubbles. The 10-minute "Big Game" will feature the pups racing to move chew toys from one end zone to the other. There will be an agility course, complete with hula hoop jumping and cones to warm up for the games. There will also be the "Fumble Recovery," where dogs will line up to race to pick up a chew toy, and the announcer will award the competition's M.V.P.

PSPCA will be selling its pint glasses, with one free draft beer included in purchase of the glass. $1 of any puppy-themed cocktail purchase will be donated to support the PSPCA as part of the partnership. The full menu of dog-themed cocktails are listed below.

Craft Hall will also have its playoff specials running all day, including a brisket cheesesteak for two for $25, Green Wings with jalapeño hot sauce and cilantro crema for $14, and the "Underdog," a beef hot dog with roast pork, broccoli rabe relish, and provolone cheese on a pretzel bun for $12.

Craft Hall will also serve its "Go Birds" cocktail with Stateside vodka, melon liqueur, pineapple juice, and lemon juice for $8, and the signature mainstay pitcher for $15.

Those who want to take part from home and maybe even receive the first-ever Barkie Award can post a photo of your pup on Instagram, tag Craft Hall (@crafthallphilly), and use two hashtags: "#Barkie" and "#BarkBowlPhilly" to be featured at the show. One like equals one ballot, and voting ends on Friday, Feb. 11 at 12 p.m. The winner will receive a special gift bag.

The event in family-friendly, but those younger than 21 will not be admitted without a parent or guardian. Admission to the event is free, but RSVPs are recommended, which can be found here.

Proof of vaccination is required to enter Craft Hall, though it is not required to use the outdoor parts of the venue, including the tables and Puppy Porch. Masks are required for indoor dining, but can be removed when seated.