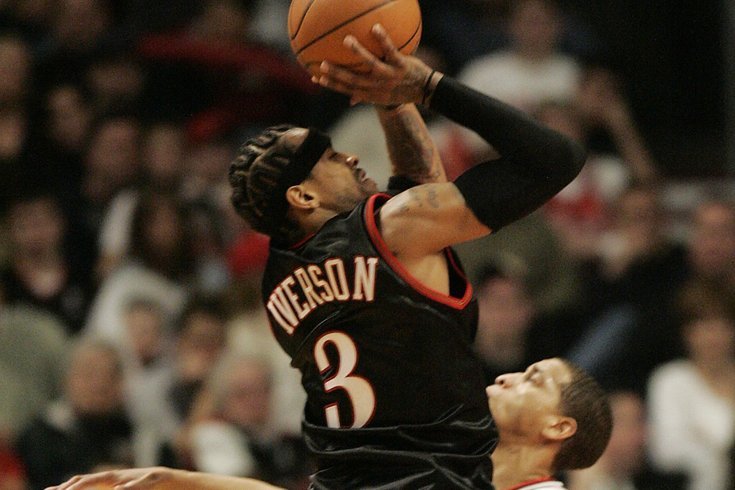 Round two of the all-time Sixers one-on-one bracket rolls on, and unless you believe Allen Iverson is going to take an L to the likes of Hersey Hawkins, it does not appear many major upsets are in the cards today.

As a reminder, here's what the Allen Iverson region looks like after being updated to reflect first-round results. 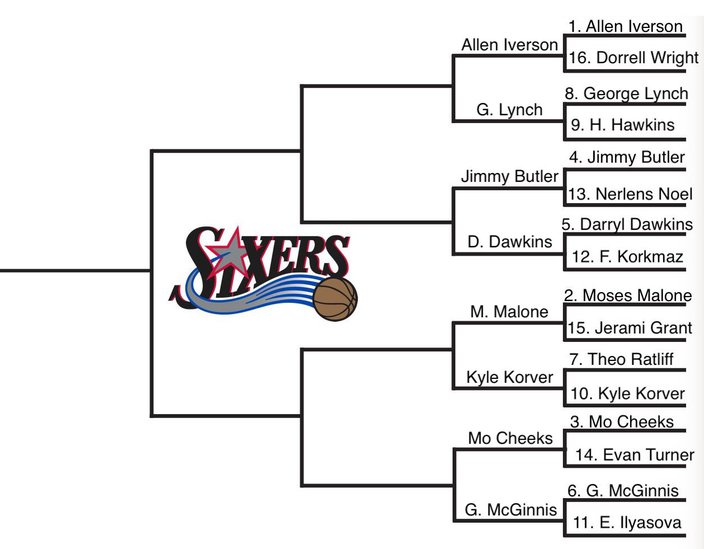 Hersey Hawkins feels like a guy who played on a lot of mediocre/bad Sixers teams who would nevertheless help out the current version of the team. When you shoot close to 40 percent from three for your career on decent volume, there is a place for you in the league regardless of whether it started in 1988 or 2018. Hawkins eventually thriving in Seattle, where he was an entrenched starter on a 64-win Sonics team that went to the Finals, is not a huge surprise.

But this one is a pretty obvious win for Iverson, unless you are somehow related to Mr. Hawkins. Iverson's ability to win one-on-one battles in isolation, his electric first step, and the lack of rim protection behind his defender is going to make him tough for anybody to beat in this tournament. Don't overthink it.

What I am most curious about in this wave of matchups is how much the Sixers fanbase actively dislikes Butler for fleeing in free agency last summer. There is obviously a level of animosity, as Butler was unmercifully booed during his first return to Philly in a Heat uniform. But as the season rolled along and things continued to deteriorate in Philadelphia, that natural feeling of doubt has to creep in. Was Butler the guy in the right all along?

(I don't tend to think so, no. There has been a lot of rewriting of history with Butler this season, as if dozens of people across several different franchises are just making up stories about him being a pain in the ass. He has never been an issue during the honeymoon period, so congratulations to him for not blowing up his new franchise in year one.)

But even if Butler is public enemy No. 1 around here, I think he would beat Dawkins in a one-on-one game. Not really the setting for a high-flying, backboard shattering dunker to take home the W, although with his size and strength, I do wonder if there's a chance he could just run Butler over.

I don't think there is a more underrated player in NBA history than Moses Malone. His name almost never comes up when you're talking about the very best players in the history of the sport, but his accolades are simply ridiculous.

Three-time MVP, 13 All-Star appearances, eight All-NBA selections, two All-Defense teams, and his peak value was matched by staggering longevity. Malone was a productive professional basketball player at 19 years old with the Utah Stars in the mid 1970s, and didn't really stop producing at a high level until the beginning of the 1990s. Malone stood across from Kareem Abdul-Jabbar, who is among the greats to ever play the game, and absolutely cleaned his clock in the 1983 Finals. The Sixers traded him thinking they were exchanging a declining player for younger talent on the upswing, only for Malone to appear in three consecutive All-Star Games in the three years immediately following the trade.

While I have my doubts about his ability to win the whole damn thing, Moses was tough as nails and a hell of a player to boot, so choose against him at your own peril.

Speaking of underrated, Cheeks' induction into the Hall of Fame in 2018 was long overdue. While he wasn't the lead dog on those great Sixers teams of the 1980s, he was a pivotal part of making them go, and by the time it was all said and done he finished as the NBA's all-time leader in steals and fifth in assists. Now 27 years later, he's still in the top-15 in both categories, a testament to how good he was during his own era.

But how would that translate to a one-on-one matchup with McGinnis? Some of Cheeks' defensive strengths would not really be relevant in a one-on-one game — his ability to dart into passing lanes and time perfect gambles for steals, for example, would not help him here. And Cheeks would be giving up a lot of size in this matchup, roughly seven inches and 50+ pounds to be more precise. McGinnis was a tough man to guard during his three years in Philadelphia, and his ability to finish one-handed through and around contact would compound that problem.

Cheeks had a significantly better Sixers career, but that's not what we're measuring here. Trading McGinnis for Bobby Jones turned out to be a brilliant move that helped set the stage for Philadelphia's eventual 1983 championship run, but in a setting where we are only worried about two guys trying to score buckets, I'm taking the scorer.