Beyoncé on board for Bradley Cooper's directorial debut 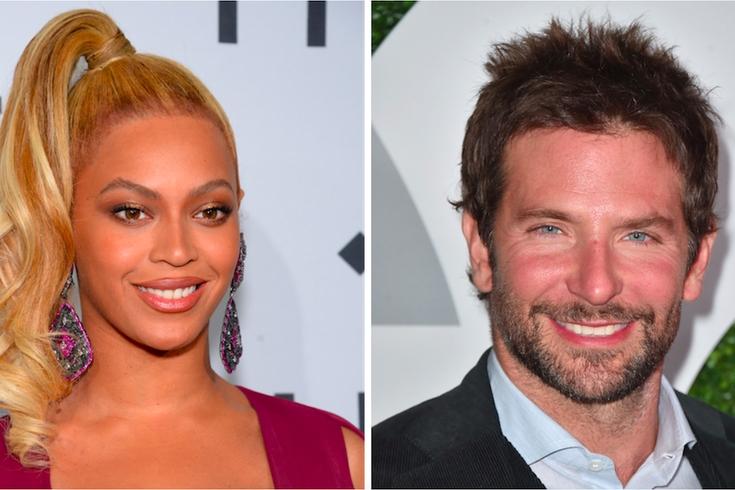 Philly-native Bradley Cooper's ambition to dazzle from the other side of the camera just received a big jolt after star actress and musician Beyoncé Knowles said she is "on board" for a role in what will be the fourth remake of the classic romantic drama 'A Star is Born.'

Knowles was originally linked to the film when it the project was slated to be led by Clint Eastwood, who also directed Cooper's critically acclaimed 'American Sniper.' When Knowles backed out of the film due to her pregnancy and other commitments, Eastwood also decided to pursue other projects, but he may have been instrumental in persuading Cooper to give it a shot.

According to Page Six, Knowles is officially "a go" for the Cooper-directed remake and has been taking acting lessons in search of "an iconic dramatic role" in a feature film. First produced in 1937, 'A Star is Born' tells the story of a waning actor who helps a rising actress achieve stardom as he plunges into self-destructive alcoholism. The film was famously remade in 1954 with Judy Garland and James Mason, while a third production in 1976 featured Kris Kristofferson and Barbra Streisand.

In September, when asked about directing, Cooper told People, "At some point I gotta s--- or get off the pot. I'm 40 years old. Clint Eastwood directed 'Play Misty for Me' at 40."

Cooper will also co-star in 'A Star is Born,' according to IndieWire, though his and Beyoncé's exact roles have yet to be revealed. In the meantime, he is expected to seek another acting role in advance of production as he works to round out the film's cast.

While the timeline for 'A Star is Born' remains fluid, Cooper is reportedly meeting with Hollywood producers to back the film. Sources told Page Six it's unlikely to start filming until the end of next year or in early 2017.

The latest Cooper film, 'Joy,' which again has him working alongside Jennifer Lawrence, premieres in theaters on Christmas.