The U.S. paralympic judo team member will be at a free virtual event hosted by the Downington Area School District at 6 p.m. on Monday, April 18 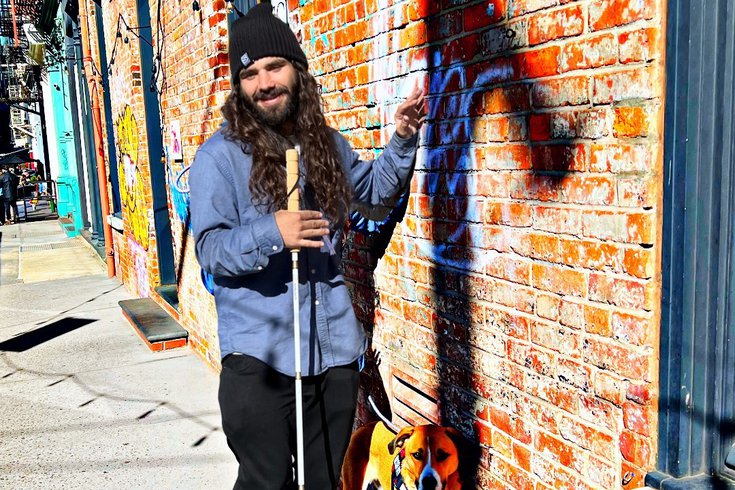 A blind paralympic athlete who's popular on social media for his unrelenting positivity will speak at an event organized by a Chester County school district later this month.

Anthony Ferraro, 25, is a member of the U.S. paralympic judo team, but he's also a competitive skateboarder, musician and TikTok star.

The uplifting videos of him shredding skateparks with his white cane and explaining his daily life as a blind person have gone viral on the platform. He regularly receives hundreds of thousands of views and has close to a million followers.

Ferraro is also a motivational speaker. He will present at a virtual conference titled "Overcoming Adversity" put on by the Downington Area School District on Monday, April 18 at 6 p.m. It's free and open to the public.

He was born blind due to a genetic condition called Leber congenital amaurosis. Although he mostly grew up in Monmouth County, he spent a lot of time in Philly as a child, he told Blind Abilities.

For a time he and his mother lived in a one-bedroom Chestnut Hill part-time – away from his father and four older siblings siblings, because New Jersey would not provide Ferraro with transportation to the school.

But his parents filed a lawsuit which was successful, and Ferraro eventually started taking a two-hour bus ride to and from the school daily.

He said that St. Lucy's mission is to prepare blind children to enter mainstream schools, and in seventh grade he began attending a public school in his native Spring Lake.

"I was the only blind kid in the school and it was a little weird at first," Ferraro said. "I tried faking not being blind, tried hiding my Braille books under my desk and on my lap to look more normal. It’s pretty hard to hide your blindness when you’re the only blind person."

He knew he needed to find an identity to help him fit in with the other kids. That was around the time he first got into wrestling.

It was a sport where he could participate in standard competitions as a blind person with relative ease, and his father and older brother were both accomplished wrestlers.

Wrestling didn't come easy to Ferraro at first, but he was determined to excel at the sport. With four days a week of consistent training, he was able to turn his two and 12 record in seventh grade into a 24 and one record in eighth grade.

Ferraro was able to compete due to a special rule. His opponents were required to keep physical contact with him at all times. Otherwise, he would have no idea where they were.

Nobody had a problem with this until he competed in the eighth grade championship, which he won.

"The kid’s dad came over to my dad and said, 'You know, your son has an unfair advantage. He doesn’t belong in this sport and he should go try the Special Olympics or just try a different sport,'" Ferraro said "This was really discouraging because I just worked so hard and I’m beating these kids."

From there, he went on to attend St. John Vianney High School in Holmdel, where he was the captain of the wrestling team for three years and won two district championships before graduating in 2013.

In his senior year, Ferraro's brother Oliver – then a film student – shot a documentary about the wrestler's quest to win a state championship, something he ultimately wouldn't achieve, with producer Chris Suchorsky.

The film got shelved and Ferraro went on to attend the College of New Jersey, where he wrestled for a year and a half before suffering a concussion and retiring from the sport.

In 2015, he reconnected with Suchorsky. He planned to meet with Ferraro's brother, but the night before the two were supposed to get together Oliver died in his sleep of a drug overdose. He was just 27.

"He was my hero," Ferraro said in a TikTok posted to his account on Tuesday noting that it's been almost seven years since his brother passed. "He always had my back in life against the haters."

I miss him everyday 🙏🏼

Suchorsky promised the Ferraros he would finish the documentary he and Oliver started. He completed "A Shot in the Dark" in 2018.

When the film's trailer started gaining traction online in 2017, the U.S. Olympic Committee reached out to Ferraro about him training in the 2020 Paralympics.


Although the International Olympic Committee had voted to remove wrestling from all its competitions, Ferraro was offered a spot on the judo team. The martial art is similar to wrestling in that opponents attempt to throw and pin each other to the ground.

He won the USA Judo President's Cup in 2017 and the USA Judo National Championships for Blind & Visually Impaired. He plans to compete at the next 2022 Paralympics, as well.

Those looking to attend Ferraro's conference later this month can register on Eventbrite.