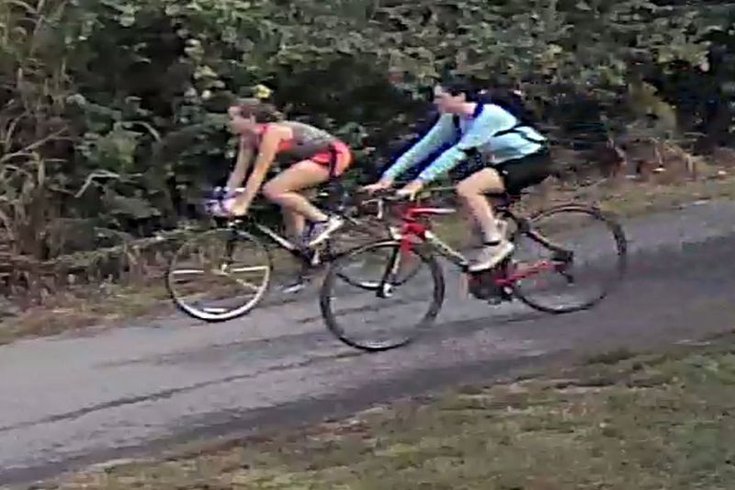 These two women are wanted in connection with the vandalism of a memorial to fallen Plymouth Township police officer Brad Fox, who was killed in 2012. The vandalism occurred on Sept. 26 at the Ridge Pike memorial site on the Schuylkill River Trail in Montgomery County, Pennsylvania.

Plymouth Township police have released a photograph of two women who were seen last weekend vandalizing the memorial to Brad Fox, a military veteran who died in the line of duty as a police officer in 2012.

Authorities said the two suspects approached the memorial site on their bikes on the afternoon of Sept. 26. While one of the women served as a lookout, the other removed the memorial's flag and tossed into the nearby bushes.

Updated images of suspects involved in the vandalism of Officer Brad Fox's Memorial Site. On September 26, 2020 at 3:24...

A video of the incident surfaced earlier this week.

Plymouth Township Police Officer Brad Fox gave up his life keeping our community safe, and these 2 cyclists decided to desecrate his memorial located at the very spot where he was shot & killed. Help Police ID them. Call 610-279-1901. pic.twitter.com/BSd5Yirczj

Fox was 34 years old and a seven-year veteran of the Plymouth Police Department when he responded to a fateful hit-and-run incident on Ridge Pike, the site of the memorial on the Schuylkill River Trail. At around 6 p.m. on Sept. 13, 2012, Fox arrived at the scene and began to pursue a suspect toward Conshohocken Road and Ernest Station Road.

The suspect opened fire, fatally striking Fox in the head. The officer's K-9 dog also was wounded, but survived the shooting. The suspect was later shot and killed.

Instead of focusing on the negative actions taken by misguided people let’s remember the hero who was Brad Fox! https://t.co/sLlQ8OJvNO

A Warminster native, Fox served in the Marine Corps and completed two tours in Iraq before joining Plymouth police. He is survived by his wife, daughter and a son, named after him, who was born six months after he was killed.

In the years since Fox's death, an annual 5K run has been held in his honor as part of the Brad Fox Foundation, a nonprofit that supports various charities.

Plymouth Police said they were not sure whether the vandalism suspects knew the full story behind Fox's death. A plaque in front of the memorial describes his contributions. He was the first Plymouth Township police officer to die in the line of duty.

Authorities are seeking help from the public to identify the two women responsible.

Anyone who knows the identity of either suspect, or has additional information regarding the incident, is asked to contact Detective Sergeant Christopher Schwartz at (610) 279-1901, or email your information to him at CSchwartz@plymouthtownship.org.