'Blue Madonna' seeks to take listeners to a place of serenity 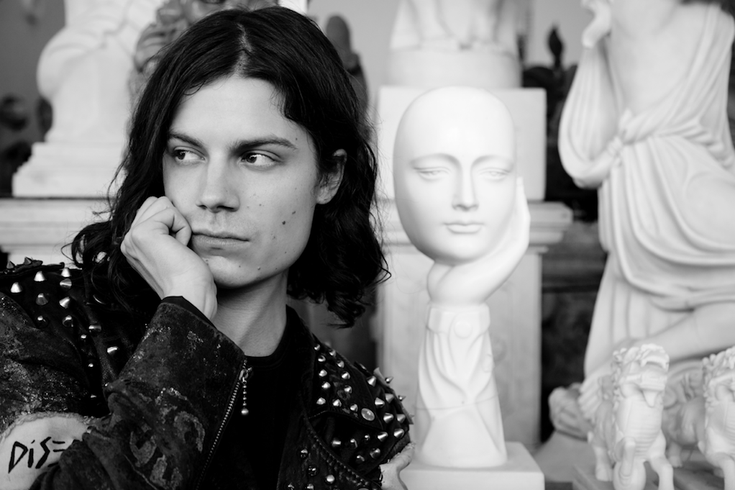 With his 2015 LP debut, "Dopamine," and its hit singles "Electric Love" and "Faded Heart," Garret Borns – better known as BØRNS – set himself up as an arbiter of sunshiny folk and glam rock-inspired electro-pop.

Along with that sound, BØRNS forged an image of the new-fangled, dapper, space folkie with an holistic edge (he has referred to growing up with a mom as a "Tonic Shaman," in the past and has always professed to being deeply committed to wellness.) Now, after a two-year long tour of the world, BØRNS is no less spacey as a person, with his idea of wellness – at present – thrown out the window as he's suffering the effects of a lousy cold. His music, too, has undergone changes what from the subtler sounds of his just-released sophomore effort, "Blue Madonna."

BØRNS makes one of his new album's first tour stops tomorrow night at the Electric Factory. Here's what he had to say for himself.

Q: Sorry you're ailing. What are you doing to feel better, especially since you're so committed to health and well-being since childhood?

A: A headline tour for a new record requires a decent amount of energy. I try to stay healthy and active, but being sardine-canned in the winter months on a tour bus makes things interesting. Garlic oil and deep sea water are my newest secret weapons.

Q: What did you learn about yourself and your craft from being on the road for two years that you were most anxious to fit onto a new album?

A: I learned it's important to challenge yourself as a performer. I'm always looking for new ways singing or stepping or holding a microphone. Touring is all mental and I always have enlightening breakthroughs right when I think I'm completely exhausted.

Q: Two part question: What does "Dopamine" and its glitter psych-pop sound like to you now, three years after you first released it, and how do you reflect whatever new feelings you might have about it in this upcoming live setting?

A: "Dopamine" was a blossoming; an instinctual record for that part of my life. I had been in L.A. for less than a year and madly in love with everything. I recorded it with my good friend Tommy English and just wanted to make songs that grooved and would be fun to play. All of those songs sound very different live now. Those tunes have traveled and drank enough tequila to loosen up a bit.

Q: Did you choose to interact differently with your arrangements for the second go 'round? "Blue Madonna" is a somber-er effort than its predecessor.

A: The arrangements were a bit more intricate for "Blue Madonna." It had been a while since Tommy and I were in the studio, so we had a lot to catch up on. We agreed in the beginning we wanted to make something cinematic and different.

Q: You have spoken in the past of a love of Barry Gibb, Roy Orbison and Harry Nilsson when it came to song craft. Has anyone new and formidable snuck into your steady sonic diet of inspirations?

A: I was listening to a lot of Les Baxter, an exotica composer.

Q: The guy who did "Quiet Village," "Jungle Jazz" and "Jewels of the Sea?"

A: Yes. He really put me into the right dream-scape.

Q: Interesting. The album does feature 12 very different sets of sounds, but much of what seems to knit it together is a swooning orchestral sensibility, yes?

A: I wanted the songs to sound sweet and innocent, but with a looming reality. I wanted them to take you to a place of serenity in your headphones and maybe experience a different frame of mind.

Q: What does the whole Madonna ideal or image mean to you before this new enterprise? Is it a sign of something religious or motherhood, and what goes with you and the whole Garden of Eden story that runs through this?

A: I saw the Virgin of Guadalupe painted all over my neighborhood in Los Angeles when I got there. That image stuck in my head and seemed like the right figure for this record. As far as something Eden-ic, it turns out there are many translations of the Garden of Eden. It sounds like a pretty psychedelic place. Also reminds me of the world before we touched and changed it. That is the purest beauty.

Q: So, was there the usual trepidation or fear of the dreaded sophomore slump? This album is a big deal.

A: The only fear was not being vulnerable enough.