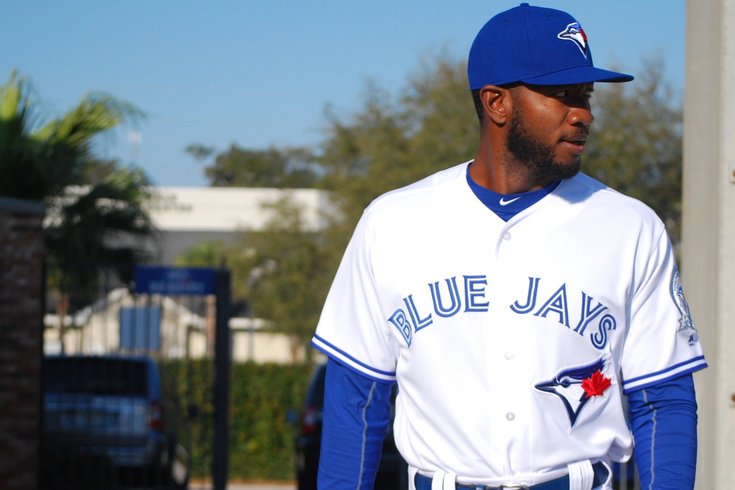 DUNEDIN, Fla. – Two of the four bats that rested on the top shelf of his corner locker stall had the familiar “9” on the handle, but the actual number he was issued wasn’t what you would expect for a former All-Star outfielder.

Domonic Brown, who signed a minor league contract with the Toronto Blue Jays two days earlier, was given No. 81.

“Terrell Owens,” joked Brown, adding that he’d have to wait for someone to get cut before he can get a proper baseball uniform number.

Once a promising two-sport start who was offered a chance to play wide receiver at the University of Miami, Brown is at the crossroads of his baseball career. He was taken off the Phillies 40-man roster shortly after the 2015 season and he elected free agency.

Like many free agents this winter, including a trio of his former teammates who also signed this week, Brown found out it wasn’t a market advantageous for players. Still, Brown, a Tampa Bay area native, found a spring training home at Florida Auto Exchange Stadium in Dunedin, a commute that’s less two 10 minutes from his home.

“It’s definitely a little bit different, wearing the blue,” Brown said after stopping off at several stations on ‘Photo Day’ in Blue Jays camp on Saturday morning. “But other than that, things have been great. I’m just trying to get comfortable and trying to make the most of my opportunity.”

Unlike some of his aforementioned, former Phillies teammates who also found new work this week, Brown could still be in the midst of the first half of his career. Although he spent 10 years in the Phillies organization after being plucked in the 20th round of the 2006 draft, Brown doesn’t turn 29 until September.

He enters the 2016 season at 28, the same age Ryan Howard was in 2008, in the peak of the slugging first baseman’s career. It’s also the same age current teammate Jose Bautista was during his first full season with the Blue Jays – his seventh big league organization – and when he went from major league journeyman to an undeniable home run-hitting force.

This isn't to say that Brown is going to hit cleanup for a World Series winner this season or lock into a power-hitting stroke for the next half dozen years. But there is time for Brown to click again and become a guy that doesn’t have to wait until February for a job wearing No.81 as a non-roster player in camp.

“I hit with Jose in the offseason the last couple of years,” Brown said. “It’s nothing but work with him. He knows exactly what he’s doing in the box. His plan, his approach, his attack – it’s what he wants to do with the pitch, and not vice versa. That’s when you know you’re a dangerous player in this game. But it’s all about hard work and knowing exactly what you want to do in the box.”

Brown was that kind of player – one of the most dangerous at the plate – for the first half of the 2013 season. During a 10-week stretch, from April 27 to July 7, Brown hit 21 home runs in 65 games, earning a trip to the All-Star Game at Citi Field.

That’s correct: two fewer home runs in his last 251 games than he had during that torrid 65-game stretch in 2013. Brown had an identical OPS (.634) in each of the last two seasons, the latter that ended with a concussion on Sept. 2nd.

"I know that I can do it, and that’s what’s keeping me confident," Brown said of getting back to his 2013 form. "I know what I can do. I’ve done it, you know what I mean? You’ve done it, so you know that it’s in there. So I want to go somewhere where they want me to play. Play baseball and have fun. That’s really the biggest thing for me. If I do that, then everything else will take care of itself."

He also knows he did not play up to his ability in the last two years. But he hasn’t given up on himself, either.

“You know, I think I was getting back to that point last year, even though I had some struggles,” said Brown, who has preached positivity ever since arriving into the Phillies clubhouse a half decade ago. “I was starting to pop a few balls and it started feeling good, other than the injury, the couple of injuries that I had were pretty serious. The Achilles and the concussion, those were two big injuries. But at the same time I’m healthy now. Which is great. I have my legs back under me. I’m just excited.”

Coming off a disappointing 2014 and two years removed from his All-Star appearance, Brown couldn’t stay on the field last season. He was pulled from a Grapefruit League game in Tampa in mid-March with Achilles soreness and didn’t return to the Phillies lineup until mid-June.

Brown was reinstated from the disabled list in late April, but ended up staying in Triple-A Lehigh Valley for seven more weeks.

It was no longer a rehab assignment. It was a demotion.

“The Phillies had always been honest with me and that was great, and I always tried to be the same way,” said Brown, who went out to lunch with then-general manager Ruben Amaro Jr. and asked what was going on. “I think their biggest concern was the power numbers. Then I popped two or three (home runs at Triple-A) in a couple of games and boom, here we go, (back to Philadelphia).”

Brown, who worked with former manager Charlie Manuel routinely in Allentown, somehow never experienced a crisis of confidence despite his lengthy stay in Allentown.

“I don’t know, man. A lot of people look at it differently,” he said. “I was all about (putting in) the work. Ryan Howard told me in 2009, ‘Wherever you’re at, use that level like it’s your big leagues, no matter if you’re hitting .270 or .300 or .220.’ That always stuck with me, honestly. When you’re playing a game when you’re out there every single day playing games, you don’t even (realize it after) a month, two months pass by.

“(But then) you’re like, OK, what’s going on here. So when you get that way, you just ask questions and the Phillies do a good job shooting it to you straight. And then you get yourself prepared and next thing you know you get called up. That’s really all it was. That’s what it boiled down to, just going out there and performing.”

“I look at everything as a learning experience. Philly has been great to me. I don’t know how a lot of other people look at it, but I had a lot of great times in Philly. ... It was a great run."

And now Brown is in Dunedin, the same place Roy Halladay once reinvented his own career 15 years ago. But he’s no longer considered one of baseball’s best prospects and he’s also not a Jays former first-round pick still finding his way, as Halladay was in the summer of ’01.

Brown is in camp with one of baseball’s best teams, a roster teeming with offensive talent, and he isn’t guaranteed anything. He’ll compete with the likes of Junior Lake and Ezequiel Carrera for Toronto’s fourth outfielder job.

As he said himself, it’s all about going out there and performing. Brown could begin that career resurrection on Tuesday, when the Jays play their first game of the spring schedule in Clearwater against the Phillies.

“I look at everything as a learning experience,” Brown said. “Philly has been great to me. I don’t know how a lot of other people look at it, but I had a lot of great times in Philly. My girlfriend and I were thinking about that the other day. It’s been great. I had been with the Phillies for almost 10 years. I got to the big leagues at 22. It was a great run.

“Now to be with another team? It’s a little different, but I’m up to the challenge. As long as I have a baseball jersey on I’m fine. To get to a team that’s in the playoff hunt and has a good chance to win a World Series, man, that’s what I want to be about.”