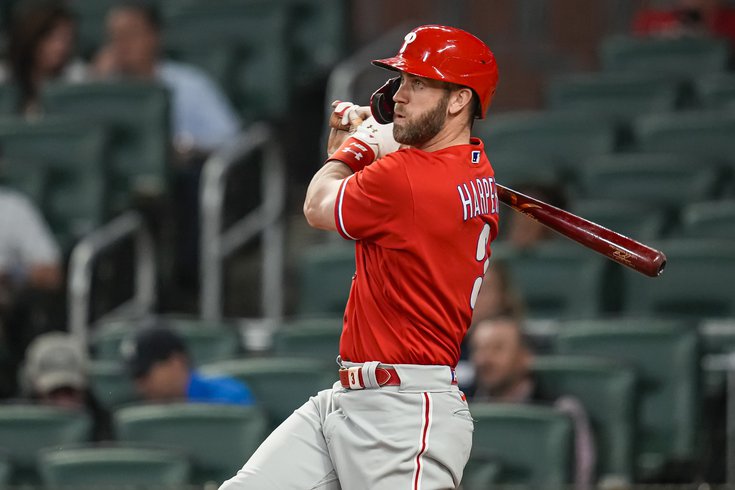 Bryce Harper can't throw because of a UCL tear in his right arm and now has an infection in his hand stemming from a nasty blister.

Yet they've hardly mattered, he's been raking anyway. And now, finally, it looks like baseball fans can't ignore that anymore.

The first wave of fan votes for the MLB All-Star Game in Los Angeles next month were released on Tuesday and revealed that Harper is dominating the National League tally so far. He's racked up 1,059,433 votes to be the NL's designated hitter on July 19, which is the third-most among all NL players at every position, and leads the second-place DH candidate, Atlanta's William Contreras, by a huge margin (nearly 475,000).

The reigning NL MVP has continued to produce at a pace worthy of the title, despite the UCL tear keeping him strictly as a DH for a few months, batting .326 with 15 home runs, 48 RBIs, and a 1.013 OPS — all second in the league to St. Louis first baseman Paul Goldschmidt.

In the month of June alone, Harper is hitting .404 with five homers and a thunderous 1.242 OPS all while the Phillies have been on a 15-3 tear since promoting Rob Thomson to interim manager.

Harper is in his fourth season as a Phillie but has yet to go to an All-Star Game in red pinstripes despite his star power and a hot streak heading into the break last season that persisted into his second career MVP campaign.

The 29-year-old is already a six-time All-Star, but those trips were all as a Washington National, with the last one being 2018, his final season in D.C.

But if things hold up, and they likely will, there's going to be no denying Harper this time.

Here's the breakdown of the NL designated hitter vote:

And the NL overall vote:

Other Phillies in the running:

• J.T. Realmuto ranks seventh among NL catchers with 127,881 votes in the initial wave. Chicago's Wilson Contreras is the top vote-getter with 801,630.

• Jean Segura was arguably the Phillies' most reliable hitter behind Harper and was quietly keeping up with baseball's best second baseman. A serious All-Star case was building for him, but a broken finger derailed it all. Still, Segura got 105,669 votes, which is good for seventh among NL second basemen. Miami's Jazz Chisholm Jr. leads the position with 634,762 votes.

The All-Star Game is July 19 at Dodger Stadium. The first round of fan voting for the starters closes June 30 at 2 p.m. ET.