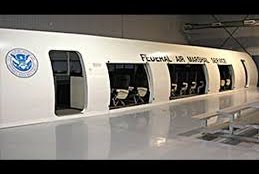 This screenshot is from a video promoting new recruits to join the Federal Air Marshal Service.

Prosecutors have accused a former federal air marshal from Bucks County of threatening his colleagues and trying to research information about weapons.

According to the criminal complaint, Turk started working for the service in 2008 and requested an early medical retirement in May 2017 because of sleep apnea, depression and anxiety. Turk had filed several Equal Employment Opportunity complaints against the Federal Air Marshal Service, specifically against the Newark field office where he once worked.

In April 2018, Turk allegedly reached out to a retired Navy SEAL seeking information about how to make and use explosives. He also allegedly sought out books and other resources about shooting long-range rifles, investigators said.

The former Navy SEAL reached out to the FBI and gave Turk the contact information of someone he said was an expert in making explosives. That person was actually an undercover FBI agent.

Turk contacted the agent through the messaging service WhatsApp, investigator said. He allegedly wrote that he was willing to pay the agent for information, but wouldn't specify what info he wanted to obtain over the app, instead requesting to meet in person. The agent refused.

Prosecutors released an email they say Turk had sent to a former coworker on April 13. In the email, Turk writes about standing up "against what's ‘right’ and not ‘white’ here," and explains that he has come up with a plan to exact revenge on the agency.

The email reads, in part:

These (expletive) think they're untouchable and that they can't be gotten to. I'm going to show them how to (expletive) with someone.” . . . “As I've said, I'm taking the fight to these (expletive) now. Know that, I'd never take my own life, my children are always a for-thought on my mind. But what kind of man would I be if I didn't live up to my motto and creed of ‘Being a Man for Others!’ So I've come up with a plan to get them for what they've done to me.”

Turk's girlfriend allowed authorities to seize 19 weapons — 12 long guns and seven handguns — from Turk's home. After returning to his residence, Turk called a former coworker who currently works at the Drug Enforcement Agency.

He asked the colleague if he liked any of the "racist m*****f******" at the Newark office and talked about assaulting an air marshal who worked there, allegedly threatening to punch his wife in the face and spit on both of them, according to the complaint.

Turk also allegedly reached out to another former air marshal and asked the employee to take care of his children if something happens to him after he goes through with his plan.

If convicted, Turk faces a potential sentence of five years in prison, three years of supervised release, a $250,000 fine and a $100 special assessment.