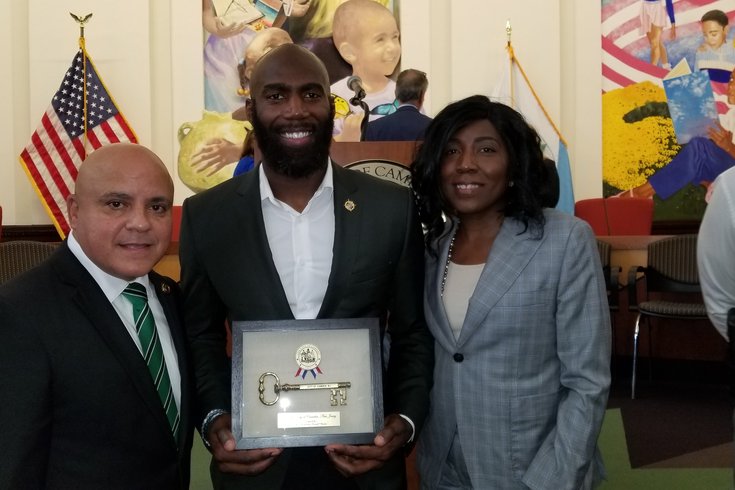 The key to the city of Camden was presented to Malcolm Jenkins on October 1.

Malcolm Jenkins has received a great many accolades—on and off the field—throughout his high school, college and pro football career. There was, however, something missing.

On Monday, before a packed house at Camden City Hall, the Eagles’ Pro Bowl safety and two-time Super Bowl winner was awarded the one thing he never previously received—a key to a city.

In a ceremony that featured Camden Mayor Frank Moran, U.S. congressman Donald Norcross, and state senators Nilsa Cruz Perez and Jim Beach, Jenkins was awarded the Key to The City of Camden for his community efforts to support youth and the underserved through The Malcolm Jenkins Foundation, which now has branched out to four states, in Louisiana, Ohio, Pennsylvania and Jenkins’ native New Jersey.

“I’ve received a ton of honors in my life, but a receiving a key to the city isn’t one of them, so this is pretty special,” said Jenkins, who made seven tackles, including two tackles for losses as one of the few bright spots of the Eagles’ secondary in their 26-23 overtime loss at Tennessee.

“We do a lot of work throughout communities around the country and sometimes you don’t know exactly how much it means. We did one event in Camden, and it was a very big event and it effected a lot of people, but to get this kind of response back is encouraging to know that you’re doing the right thing. It’s also an honor for all of those who volunteer and give their time to make our efforts possible.

What can’t be lost, and who was also recognized throughout the various speeches was Gwendolyn Jenkins, Malcolm’s mother and president of the Malcolm Jenkins Foundation.

“If there is a way to cut the key in half, I would,” Malcolm said. “This key is probably going to end up in her house, because my mom is the one who really, really puts in the work and makes this go. It was great to hear everyone up there today mention her. She’s the one who puts in the hours to make it go, and I definitely wouldn’t have received this award without her.”

Norcross has seen first hand the contributions of the Jenkins Foundation.

“When a star the size of the Philadelphia Eagles and Malcolm Jenkins come to town, with all of the responsibilities, because he cares about the city and he cares about the people, I think he speaks volumes who he is, and who the Eagles are,” said Norcross, the representative for New Jersey’s 1st congressional district. “So often when people hit stardom, they forget about where they came from. Malcolm Jenkins is quite the opposite. He gives back and that’s quite important.” 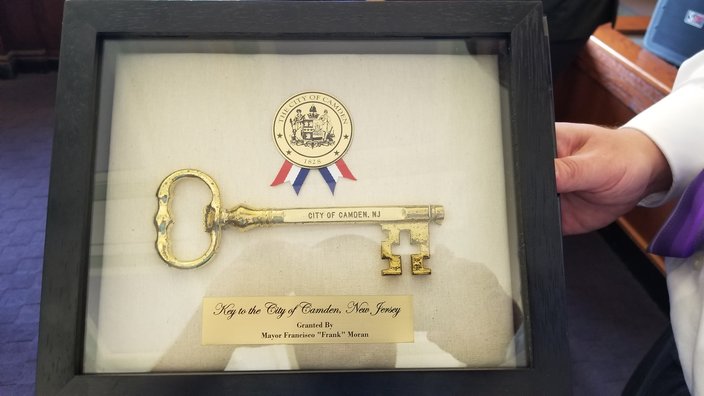 The Malcolm Jenkins Foundation is planning to make more overtures in the Camden community.

In 2018, The Malcolm Jenkins Foundation partnered with Feed the Children and other community partners to host “Get Ready Fest” at Antioch Baptist Church in Camden.  This community outreach event helped to provide hundreds of pre-identified families with 25 pounds of food, 10 pounds of essential items, as well as health and wellness products.

In addition to providing enough food to feed a family of four for one week, this staple Foundation event offers an array of health-related services and information for the community. These services include screenings for blood pressure, cholesterol, diabetes, asthma, basic eye and dental check-ups, GED, job training, plus senior, veteran and youth services.

“This just shows the appreciation to receive something like this,” Gwendolyn Jenkins said. “There were many people that were here today who have been involved, and this is a reward for them, too. That’s what also makes this special. We’re growing, and that will continue with the partnerships and collaboration, especially from the City of Camden, which has so many needs.”

Mayor Moran made it a point to show that appreciation, not just for what Jenkins has done locally for Camden, but for Jenkins’ national stances on social issues, too.

“It’s an historical act that really signifies what the City of Camden appreciates, and what I appreciate as the mayor,” Moran said. “Malcolm standing up for the social issues nationally, and standing up for the rights of the underserved, so I thought it was fitting for him [to receive a key to the city] and it will go down in history in the City of Camden that once there was an individual named Malcolm Jenkins who received a key to the city for these specific reasons.”