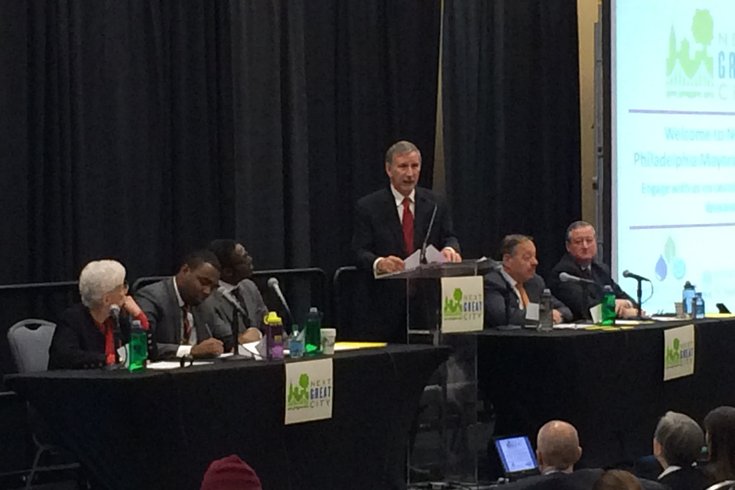 Six candidates for Philadelphia mayor participated in a forum hosted by The Next Great City coalition.

Read More
Six candidates running to be the next Philadelphia mayor debated the best ways to sustain and improve the city’s myriad neighborhoods Tuesday at a forum hosted by The Next Great City coalition.
The candidates – Lynne Abraham, Doug Oliver, Keith Goodman, Anthony Williams, Nelson Diaz and Jim Kenney – kept their responses positive, speaking on their experiences and plans to enhance quality of life.
They fielded questions on five recommendations identified by The Next Great City as ways to create sustainable neighborhoods – repairing substandard housing conditions, strengthening small businesses, clearing litter, improving trails and bike lanes, and providing free drinking water and nutritious food to students. A sixth recommendation — developing extreme weather emergency plans — was not discussed.
The Next Great City, a coalition of more than 100 civic, labor, professional and religious organizations, has suggested the next mayor adopt a housing policy that enhances neighborhoods without displacing residents.
Oliver, a former press secretary to Mayor Michael Nutter, advocated for protections that will prevent displacement in areas where development is rapidly progressing.
“The city is vibrant and people are moving in,” Oliver said. “But equitable development is very important to ensure that everybody participates in the economic prosperity associated with that development.”
Diaz, a former judge and city solicitor, advocated for an 80/20 plan, a housing strategy that requires developers to rent 20 percent of a multi-unit complex to low-income residents.
“The most important thing that one can do is to provide access to people who are poor and middle class,” Diaz said. “Make sure the 20 percent is people who have income requirements. That way you don’t move everyone out of the neighborhood.”
Abraham, a longtime district attorney, pushed for extending the city’s property tax abatement program to 20 years in low-income neighborhoods, enabling longtime residents to remain in revitalizing areas. The current program provides a 10-year abatement in Center City.
“Rather than abandoning the tax abatement program,” Abraham said, “we expand the program so that … they can stay in that neighborhood and beautify it as it grows and it grows and it grows.”
Goodman, the pastor of North Philadelphia Seventh Day Adventist Church, argued that the abatement program be modified, stressing that the city is missing out on valuable tax dollars.
“The issue of the 10 years doesn’t necessarily help our city coffers in terms of our school systems,” Goodman said. “It has to be modified so that we can get that revenue, at the end of the day, in the neighborhoods. We need the students to be educated. We need more revenue.”
Kenney, a former city councilman, argued that Center City’s growth never would have occurred without the tax abatement program.
"I think it’s been worth it and it's done a lot of commercial and residential development," Kenney said.
Williams, a state senator, arrived late from Harrisburg, missing the housing portion of the debate. But he pushed for incentives that would bring businesses into neighborhoods, another prime topic of the night.
“Philadelphia houses 44 percent of its economic growth in Center City,” Williams said. “It is a flat economy across neighborhoods. We have to change that design.”
Abraham also advocated for incentives, noting incentives helped the Passyunk Avenue corridor transform into a “dynamite” area ripe with restaurants and venues.
“What you do is you create an excitement and a buzz about a community,” Abraham said. “Then you draw people in. You can give them tax incentives and tax breaks. … You can encourage business by having them access capital, which is extremely important, and, obviously, partnering with large corporations who will give you advice and teach the young entrepreneur how to run business.”
Diaz called for using the Philadelphia Industrial Development Corporation in the neighborhoods. The agency has brought businesses to the Navy Yard.
“Why don’t we use the knowledge and the capacity that we have in that agency and use it in the neighborhoods?” Diaz said. “Broaden it out to other community opportunities – that's the element to how one can begin growing businesses.”
Kenney advocated for improving the information technology capabilities of the city’s revenue and licenses and inspections departments, arguing it will streamline the process for businesses and enable the city better collect revenue.
“We need to make sure that L&I, in its licensing division, works in a streamlined fashion and gets its services to business owners – both small and large,” Kenney said. “We’re going to continue to try to make it better process so that people can file easier and we can track people down who are not paying their taxes.”
Among other environmental topics, four candidates supported adopting an ordinance forcing retailers to charge customers for using plastic and paper shopping bags.
“Cleanliness attracts more cleanliness,” said Oliver, who supported the measure along with Kenney, Abraham and Diaz. “People, when they want to throw their trash out, look for neighborhoods that are already messy to do that.”
Williams and Goodman opposed it, arguing it would serve as a regressive tax adversely affecting low-income residents.
“I would not charge 15 cents per bag,” Goodman said. “We would hire more people to (clean up) the neighborhoods. It would create jobs and it would also keep the neighborhoods clean.”
The forum marked the third time the candidates gathered collectively. They previously participated in forums hosted by the Philadelphia Federation of Teachers and the West Parkside Business Association.
A seventh candidate, former state Sen. Milton Street, was not present.