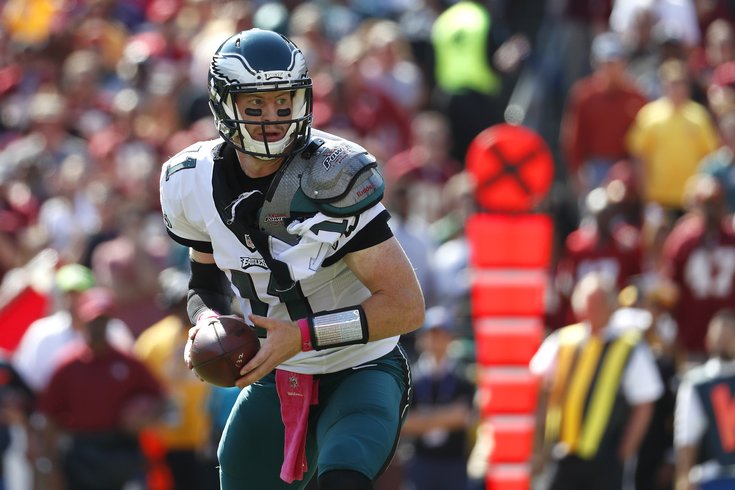 (In Robin Williams voice)... It's not your fault.

According to Stats LLC, Carson Wentz led the NFL with an 83.8 (31-of-37) completion percentage against the blitz this season heading into the Sunday's game against the Washington Redskins.

Last week, Doug Pederson was asked why Wentz has been so successful against the blitz.

"I think the number one thing is preparation," he said. "Honestly. We spend time on Wednesday and Thursday mornings in blitz meetings with the quarterbacks, the offensive line. [Carson] and the quarterbacks, obviously all the quarterbacks, are here at 5:30 in the morning. And they're looking at blitz tape and going through all the calls and rules and things that we have going in for this particular week, which we do every week. And it's just recognition. Blitz comes down to recognition."

Facing third and 10 from just outside the Redskins' 10 yard line with about five and a half minutes left in the fourth quarter on Sunday, rookie quarterback Carson Wentz faced a blitz in which the Redskins sent seven rushers, and his recognition was put to the test.

As he has done against the blitz all season long, Wentz knew where his hot read was, and he quickly flicked a pass to tight end Zach Ertz, who likely would have walked in for a score.

"They brought an all-out blitz, and Ertz was the hot throw," explained Wentz. "I've got to get it down. I threw it high, made it hard on him, but if I get it down and put it on his chest it's a walk-in touchdown, so that's something we have to clean up."

Sure, I guess Wentz could have gotten the throw down a tad. He could have also run through a brick wall of defenders to gently hand the ball to Ertz in the same way a mother hands her newborn baby to her mother-in-law, I suppose.

As is, the ball was maybe six inches above Ertz's forehead, a catch that a professional tight end needs to make. Instead of cutting the Redskins' deficit to three, the Eagles had to settle for a field goal, cutting the lead to seven.

If you're a quarterback who is getting into the building at 5:30 a.m. every day to prepare for situations just like that one and your teammate cannot finish the play, it would be understandable if the quarterback were to put the blame where it rightfully should have gone. Instead, Wentz put the blame on his own shoulders both on that that throw and on the two sacks he took late in the game. Not everyone has that kind of personality.

"Players do see that," said Pederson to reporters on Monday. "And that's just a sign of a mature quarterback. That's the type of guy that Carson is. He's hard on himself. And he understands that those situations; he can't take those sacks obviously in those situations. He knows that. The ball has got to come out. Whatever he can do to get the ball lower, six inches, whatever. Zach making the play, it's a touchdown on the play. When he takes ownership that way, the guys really do understand and see that this is a kid that you can rally around and support because he's a tough kid now and he's going to stand there and take a lot of shots. And rightfully so. Yeah, the guys take notice of that."

Wentz has little in the way of margin for error within this offense. Jordan Matthews dropped what should have been a touchdown pass earlier this season, as did Dorial Green-Beckham. On his lone interception on the season, which was certainly a mistake by Wentz, he didn't get much in the way of help from Nelson Agholor who failed to prevent the Lions' Darius Slay from making the play.

It's fine and good that Wentz's teammates respect him. And, well, they should, since he's pretty clearly the best player on the offense. But at some point, they're going to have to start making routine plays.