Philly-area Liverpool fan flies to Madrid for Champions League final, without tickets to the match

Matt Howley said he's hoping to spend less than $2,000 on tickets to the championship match 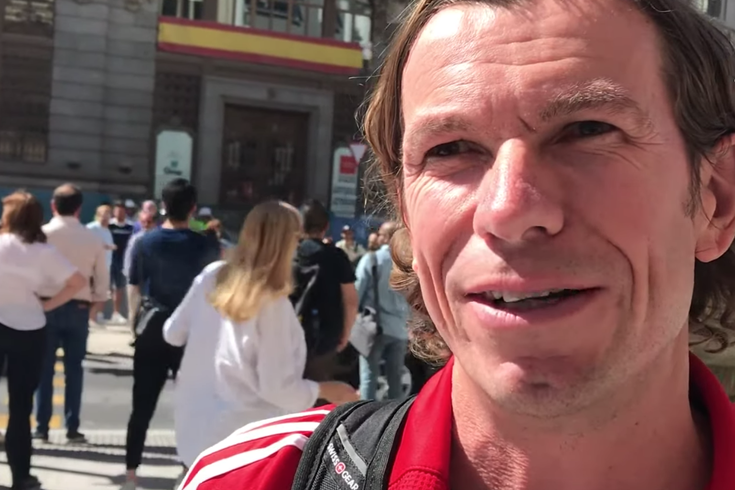 Matt Howley, who lives in Philadelphia, flew to Madrid for the UEFA Champions League final match between his favorite team, Liverpool, and Tottenham Hotspur. He did it without tickets.

That Philly sports fans are among the most passionate in the world is not a secret. As it turns out, local sports fans' intense dedication extends to teams from other countries, too.

The UEFA Champions League final is this weekend in Madrid, Spain, and one Philadelphia man said he flew across the Atlantic Ocean to try and see his favorite team, Liverpool, win the tournament against Tottenham Hotspur.

MORE: The Sopranos' famed New Jersey house is for sale, starts at $3.4 million

For some reason, he did this without tickets to the match itself. Bold!

Matt Howley talked to BeanymanSports on Friday in a man-on-the-street segment live from Madrid. Howley explained how the impromptu trip came to be -- "We just wanted to be a part of it," Howley said -- and how much he's willing to spend -- "I'd like to keep it under $1,000 a ticket" -- in order to watch the match live.

Howley said he and his girlfriend drove from Philadelphia to John F. Kennedy International Airport, took a red eye flight from New York to Barcelona, and then traveled to Madrid. The match is being played Saturday afternoon at Wanda Metropolitano in Madrid.

His less-than-$1,000-per-ticket plan might fall through, he admitted, considering the cheapest tickets still available on StubHub a week before the match were priced around €4,500, or just over $5,030.

"I don't think [less than $1,000 is] realistic," Howley admitted in the video, "but I could meet some kind, good samaritan who says, 'My two friends aren't showing up, so face value, will you pay?'"

If he and his girlfriend can't find tickets, Howley said they'll watch the match at a bar. A trip across the ocean to watch a soccer match in a bar sure sounds like a weird way to spend your weekend. If Liverpool loses, we wouldn't want to be on Howley's flight home on Tuesday.