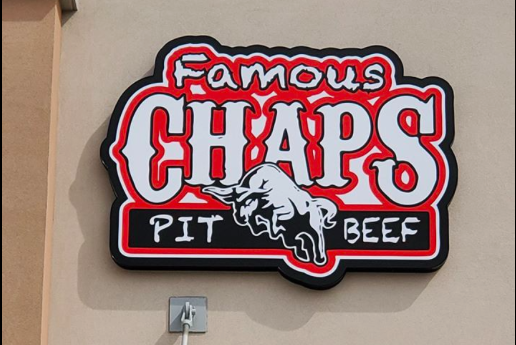 If you want some Chaps Pit Beef, you no longer have to drive south of the Mason-Dixon line to chomp down on one of Baltimore's most treasured sandwiches.

There's a new location now open near Media. It's the chain's first franchise in Pennsylvania.

We are OFFICIALLY NOW OPEN for business and so excited to be serving the community! Tag your friends & help us spread...

Anyone familiar with Baltimore knows about Chaps Pit Beef on Pulaski Highway, surrounded by the Gentleman's Gold Club and an Adult Video Outlet. Just down the road, a "Baltimore" mural adorns an overpass in blue, orange and black.

First established in 1987, Chaps has expanded with additional franchises in Aberdeen, Frederick and Rehoboth Beach.

The one in Delaware County was opened by longtime Phillies beat writer Paul Hagen, who spent decades writing for the Philadelphia Daily News and MLB.com, and has freelanced at PhillyVoice, among other outlets.

Hagen said that he and NBC Sports Philadelphia's Jim Salisbury used to carpool together to cover Phillies games in Baltimore and Washington, D.C. The two made it a custom to stop at Chaps Pit Beef for a meal, much like others in the Philadelphia area attending concerts and other events in Baltimore.

During one visit, Hagen noticed that the restaurant was expanding. The gears started turning. His son had been working in the restaurant industry for years, and though Hagen was no longer writing full-time, he decided he wasn't quite ready to retire at age 67.

"One thing led to another," Hagen said.

Chaps Pit Beef memorably appeared in HBO's "The Wire" during a scene in which Avon Barksdale's most trusted soldier, Wee Bay, goes heavy on the hot sauce.

The restaurant later was featured in an episode of Guy Fieri's "Diners, Drive-Ins and Dives," which is what first put it on Salisbury's radar.

Chaps is known for sandwiches that pay homage to Baltimore — such as The Raven and No. 52, for linebacker Ray Lewis — but Hagen said he hopes to eventually create additional sandwiches to represent the Philadelphia area.

For now, Chaps Pit Beef is only open for takeout or limited indoor dining due to Pennsylvania's COVID-19 guidelines. Hagen said the restaurant can safely seat about 12 people.

After just one week, Hagen has been surprised to see the level of recognition among customers.

"There is a much bigger base of people who already knew about it than I realized," Hagen said.