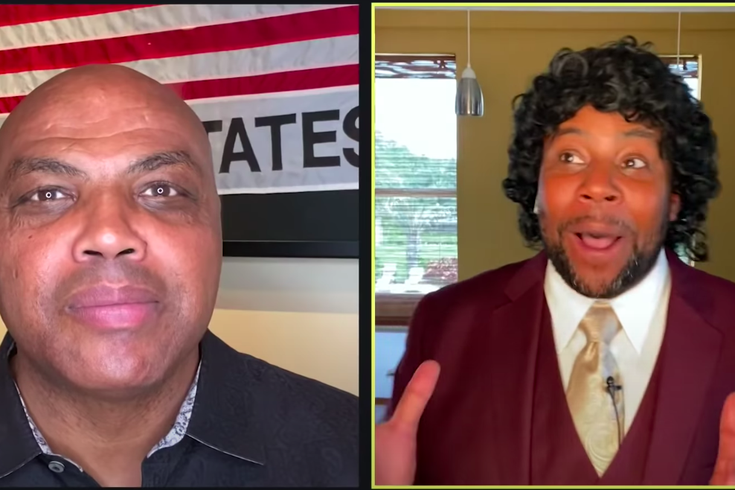 Basketball Hall of Famer Charles Barkley made a guest appearance on “Saturday Night Live at Home” this weekend, when he showed up during a special quarantine edition of the “What Up With That” bit starring cast member Kenan Thompson.

“I’m not gonna lie. This is weird,” Barkley said after being introduced by Cole.

Thompson’s character then asks Barkley about “The Last Dance”, the 10-part documentary chronicling Michael Jordan’s final season with the Chicago Bulls in 1997-98. Barkley has yet to appear prominently during the show’s first two episodes. But given his role on the Dream Team at the 1992 Summer Olympics and having played against Jordan’s Bulls in the 1993 NBA Finals as a member of the Phoenix Suns, Barkley’s presence will certainly be felt at some point in the documentary.

“It was special,” Barkley said of competing against Jordan during his career, “and the documentary is excellent. But it doesn’t show everything. Let me tell you about something that’s not in there.”

The sketch’s background music begins to play, causing Barkley to stop for a second. Nevertheless, Barkley continues with his story.

“Like I was saying, I played with Michael and all these guys,” Barkley said. “They’re incredible stories people still don’t know.”

But before Barkley can continue, Thompson’s character disrupts him and begins repeating Barkley’s comments in a sing-song manner, causing the former NBA MVP and 11-time All-Star to get annoyed and start rolling his eyes.

“And you might actually hear them if you would let me talk, please,” Barkley said. Thompson’s character, in the same sing-song manner as before, insists he’s letting the 57-year-old Barkley talk. But the Philadelphia 76ers’ legend disagrees.

“No you’re not, which is a shame,” Barkley said. “I’m trying to tell you about the one time me and Michael Jordan…” But before Barkley can even finish his thought, Thompson’s character breaks back into singing and reprises the bit’s theme song.

At the conclusion of the sketch, Thompson’s character thanks Barkley for coming on.

“That’s it?! Whatever,” Barkley said.

You can watch the whole clip here.


Barkley has been a host and impersonated multiple times on “Saturday Night Live.” He’s hosted the show at least four times since 1993, with his most recent appearance coming in 2018. Thompson, ironically enough, has impersonated Barkley at least nine times on SNL since 2007.

This weekend’s episode of SNL was the second edition of which was filmed remotely at home by the cast members due to the COVID-19 pandemic.