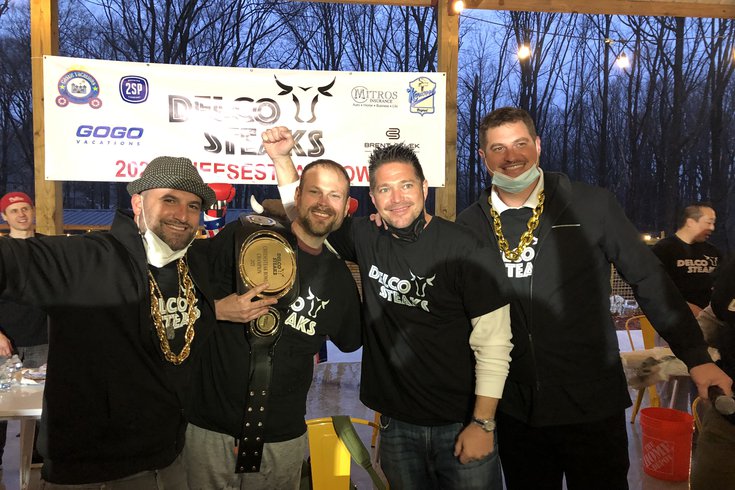 The competitive eating landscape in the Philadelphia region hasn't quite been the same since Wing Bowl concluded its 26-year-run after the Eagles won the Super Bowl in 2018.

But on Wednesday, National Cheesesteak Day, a Central Pennsylvania man channeled some Wing Bowl energy by devouring not one, but two, 24-inch cheesesteaks in about a minute-and-a-half each.

The speed competition, held by Delco Steaks in Broomall, was officiated by former Philadelphia Eagles tight end Brent Celek. About 33 contestants participated in the first round, which was broken into three groups in order to maintain social distancing. The final round came down to those who had the three best times in the first round. The event was streamed live on Delco Steaks' Facebook page.

Dan "Killer" Kennedy, a West Decatur, Clearfield County resident and owner of an auto collision shop, took the top prize — an all-expenses paid trip to Cancun and a championship belt. His official times were 1:39 for the first round and 1:34 for the second round.

Kennedy, 38, told PhillyVoice on Thursday that he's been a professional eater for five years and has racked up more than 350 restaurant challenge wins. He's become one of the top competitive eaters in the world.

"There's daily training — keeping your stomach expanded, staying loose," Kennedy said. "A lot of guys, they'll even exercise their jaw, things like that. I pretty much use standard training methods — high volumes of low calorie foods and liquids. And then of course the speed aspect is something you kind of have to figure out on your own. That's not something you can teach somebody, you know?"

Kennedy has participated in speed contests around the country, often placing among the best in big contests.

At Z Burger in Washington, D.C., Kennedy once ate 34 cheeseburgers in 10 minutes, good for second place. At Chronic Taco in California, he ate 120 tacos in 10 minutes, earning him third place. He's also eaten 41 four-ounce blueberry pies in 10 minutes — over 11 pounds — to claim what he said is a world record.

And at the final Wing Bowl, Kennedy downed 363 wings. That was well behind winner Molly Schuyler's 501, but not too far from the 396 eaten by runner up David T. "Wings & Things" Brunelli.

At Wednesday's contest, Kennedy said the key was getting as much food down with liquid as he possibly could and minimizing chewing.

It helped that Delco Steaks has top-notch cheesesteaks, he said. While taste is usually more of a factor in duration contests than speed contests, it still makes a difference.

"The better the food is, the easier it is to go down," Kennedy said. "Yesterday's Delco cheesesteaks were delicious. It makes it a lot more enjoyable and obviously a lot easier to eat. You would think taste would be the last thing on your mind, but you're like, 'man, this thing's pretty good.'"

Kennedy also said he shared a conversation with Celek about his training regimen and earned the respect of the former Eagle, who was blown away by his performance.

"In all honesty, competitive eating — I really, truly believe that a lot of dedication goes into a lot of the elite level eaters," Kennedy said. "I believe that we definitely train hard to be able to do what we do. I look at it as a sport."

Given the state of the world and the ongoing pandemic, Kennedy said his trip to Cancun likely will have to wait until some time next year. That will give him more than enough time to scope out any eating contests and restaurant challenges he can tackle when he gets there.