Driver sought in hit-and-run that killed woman in Cheltenham 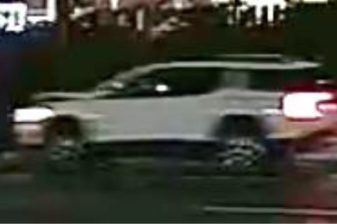 Cheltenham Township police are searching for the driver of a white 2019 or 2020 GMC Acadia, pictured above, in connection to a fatal hit-and-run crash that occurred on Sunday, Sept. 27, 2020.

Cheltenham Township authorities are searching for the driver of a vehicle that struck and killed a 30-year-old woman Sunday night.

The incident occurred around 8:15 p.m. on Cheltenham Avenue near Ogontz Avenue in Wyncote, police said.

The victim, Shanna Hurdle, of Philadelphia, was struck as she crossed the road. She was pronounced dead at the scene.

Hurdle was struck by a white 2019 or 2020 GMC Acadia with noticeable damage to the front end and hood, investigators said. The vehicle was last seen on Upsal Street in Philadelphia.

Cheltenham Police Department is attempting to locate a vehicle involved in a hit and run fatality of a pedestrian which...

The crash remains under investigation. Anyone with information is asked to call Cheltenham Township police at (215) 885-1600.