The boy was found unresponsive on his school bus. Police say he had been exposed to the synthetic opioid while cleaning drug paraphernalia that belonged to Troy Nokes 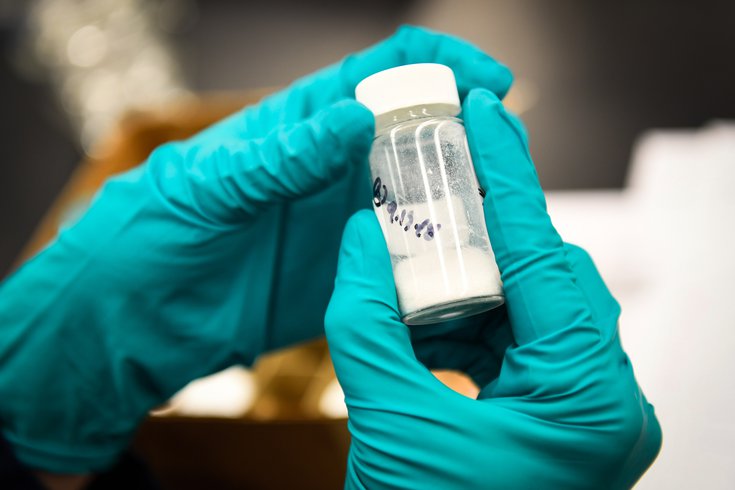 Troy Nokes, 35, of Gloucester Township, is charged with the death of his 12-year-old nephew, who overdosed on fentanyl earlier this year. The boy was exposed to fentanyl, a synthetic opioid, allegedly while cleaning drug paraphernalia that belonged to Nokes. The file image above shows a DEA chemist holding small bottles of the synthetic opioid.

A Gloucester Township man has been charged with the death of his nephew, a 12-year-old, who was found unresponsive on his school bus after overdosing on fentanyl while cleaning his uncle's drug paraphernalia, the Camden County Prosecutor's Office said Thursday.

The child was exposed to the powerful synthetic opioid earlier this year, allegedly while cleaning drug paraphernalia that belonged to his uncle Troy Nokes, 35, investigators said. The uncle and nephew lived in the same house in the town's Blackwood section, according to authorities.

Nokes allegedly was manufacturing fentanyl the weekend before the incident, police said. He is charged with first-degree aggravated manslaughter, manufacturing a controlled substance, employing a juvenile in a drug distribution scheme and related offenses.

The 12-year-old was found unresponsive on his school bus on Jan. 24. A school nurse tried to revive the child but he ultimately was transported to a hospital, where he on Feb. 1. An autopsy found that he had overdosed on fentanyl.

Another person, Joanna Johnson, also has been arrested in the case. She has been charged with evidence tampering and hindering efforts by police to apprehend Nokes.

Both are being held at the Camden County Correctional Facility pending a pre-trial detention hearing.

The investigation is ongoing. Anyone with additional information can contact Camden County Prosecutor’s Office Detective Lateasha Jones at (856) 225-8656 or Gloucester Township Police Detective Mark Grodzielanek at (856) 374-5718. Tips can also be sent anonymously to ccpotips@ccprosecutor.org.