Bottom Dollar closing leaving some neighborhoods without a nearby grocery store 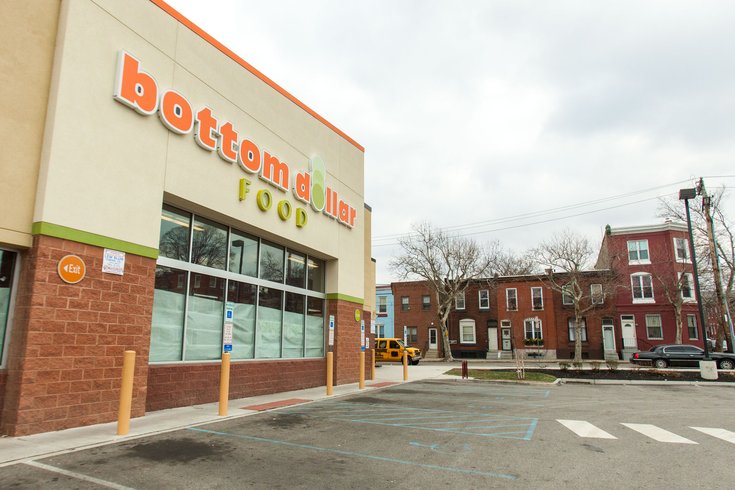 This Bottom Dollar Food store in the Brewerytown neighborhood of Philadelphia recently closed.

When Bottom Dollar Food markets opened a location at 31st Street and Girard Avenue in November 2012, it marked the first time Brewerytown had a grocery store in more than a decade.

Neighborhood residents flocked to the store, which offered an array of affordable fresh produce and staples. Even residents of Strawberry Mansion made the trek, pushing carts up and down the steep hill on 31st Street that led to their neighborhood.

“It was very convenient for me,” said Charles Holliday, a longtime Brewerytown resident and the community liaison for the Greater Brewerytown Community Development Corp. “It had a good variety. It wasn’t fancy. There wasn’t any kind of organic food or anything, but it was a very good thing.”

“It’s not what poor people do. Poor people go to supermarkets. They’re just going to have to travel further.”

The store, like all remaining Bottom Dollar locations, shut its doors last week.

The grocer’s parent company, the Belgian-based Delhaize Group, announced in November that it was selling its 66 Bottom Dollar locations to Aldi Inc., another discount grocer based in Batavia, Illinois. The $15 million sale is expected to be finalized sometime during the first quarter of this year.

Until then, the future of the Bottom Dollar stores – exclusively located in the Philadelphia and Pittsburgh regions – remains unclear. Aldi has not announced its intentions for those locations, leaving some neighborhoods uncertain about their future access to staple foods and produce.

“I’ve been thinking about where I want to go,” said Holliday, who listed possibilities in other neighborhoods. “It’s two or three buses. So for a family or a senior, it’s an ordeal. For anybody, it is.”

The U.S. Department of Agriculture defines a food desert as a census tract that qualifies as both low-income and having low-access to fresh, healthy and affordable food.

For years, Philadelphia was among the cities most underserved by food markets, said Amy Hillier, an associate professor of city and regional planning at the University of Pennsylvania. That began to change, she said, following the passage of the Fresh Food Financing Initiative, legislation designed to attract grocery stores to underserved communities throughout Pennsylvania.

The Philadelphia region has very few food deserts by the original standard, which requires any qualifying urban tract to be at least 1 mile from a supermarket. But when new measures factoring vehicle access are applied, food access becomes much more limited across the region.

Hillier doubted the closings of Bottom Dollar would create many new food deserts, at least by the agency’s standards. But, she said, there was “no question” that low-income residents would be disproportionately affected, listing Brewerytown among the areas that might feel the greatest impact.

“That neighborhood was organized and was advocating for a supermarket for a long time,” Hillier said. “Bottom Dollar opening up was heralded as a major community accomplishment. There are other Bottom Dollars that just sprouted.”

The closings of the 46 Bottom Dollar locations in the Philadelphia region might make it more difficult for some residents to access a grocery store. But Hillier said her research shows residents will find a way.

Hillier has conducted research examining the grocery shopping habits of urban residents. One study found that 94.5 percent of participants shopped at chain supermarkets.

The market research she conducted for Philabundance, which opened a nonprofit grocery store in Chester, found that most residents still shopped at supermarkets despite the city not having a supermarket for more than a decade. A Bottom Dollar opened there last June.

“Overwhelmingly, the people in Chester and other food desert areas get themselves to a supermarket,” Hillier said. “They’re going to go to a different supermarket. They’re not going to revert to corner stores.

“It’s not what poor people do. Poor people go to supermarkets. They’re just going to have to travel further.”

The biggest implication of Bottom Dollar closing is that it supports the fears of many grocers, Hillier said.

“I think it confirms what we’ve all worried – for-profit grocers either can’t, or can’t imagine, making a profit without a subsidy in these low-income neighborhoods,” Hillier said.

‘Not a sustainable business model’

Bottom Dollar appeared to defy market trends by locating in low-income neighborhoods and offering high-quality produce at low prices, Hillier said. Unlike prior grocers that located in less affluent neighborhoods, Bottom Dollar did so without seeking subsidies.

That model made Hillier curious. She sought to conduct research at the Brewerytown location, but her request – which was forwarded to the chain’s corporate headquarters in North Carolina – was denied.

“I really wanted to know how it was working,” Hillier said. “The reality must be there was not a sustainable business model behind this.”

State Rep. Dwight Evans, D-Philadelphia, wondered the same. He questioned the company’s placement strategy, arguing that many food deserts had been eliminated by the Fresh Food Financing Initiative.

Adopted in 2004, the initiative provided a $30 million state grant that was leveraged by an additional $145 million from the Reinvestment Fund, a community development financing institution. The funding was distributed to 88 projects across the state to assist with predevelopment, land acquisition, construction and employee training costs.

That landmark legislation, later adopted by various states, was pivotal in bringing a grocery store to various Philadelphia neighborhoods. By the time Bottom Dollar locations began popping up, Evans said, many residents had developed brand loyalty.

“The availability and the accessibility of food means that there’s far more competition,” Evans said. “Just because you build a brand-new building and put it in a new location doesn’t mean you’ll get the customer base.”

Yet, Evans said, Bottom Dollar did open some stores in locations that appear viable. He particularly noted Brewerytown. Whether Aldi will reopen those locations remains to be seen.

“I think that (Brewerytown) is a viable area,” Evans said. “Again, you won’t know until the new owners make their own individual assessment on particular communities where there’s some traction or need of a supermarket.”

Aldi officials have kept mum on the future of the Bottom Dollar markets, only releasing a statement that acknowledged the company’s intention to reopen “a number” of them as Aldi stores.

Holliday, the community liaison for the Greater Brewerytown Community Development Corp., said he would welcome an Aldi in his neighborhood.

“I think everyone would,” Holliday said.

But the shuttered Brewerytown property is owned by Soloff Realty and Development – not Bottom Dollar. How that affects the store’s future is unclear. An SRD representative said the firm would not comment, and Holliday said he has been left in the dark.

For now, all Brewerytown residents can do is wait.

“The store was great,” Holliday said, “but now there’s nothing to eat. That’s the way it goes.”