Kids who are deaf and have developmental delays benefit more from cochlear implants than hearing aids, research suggests 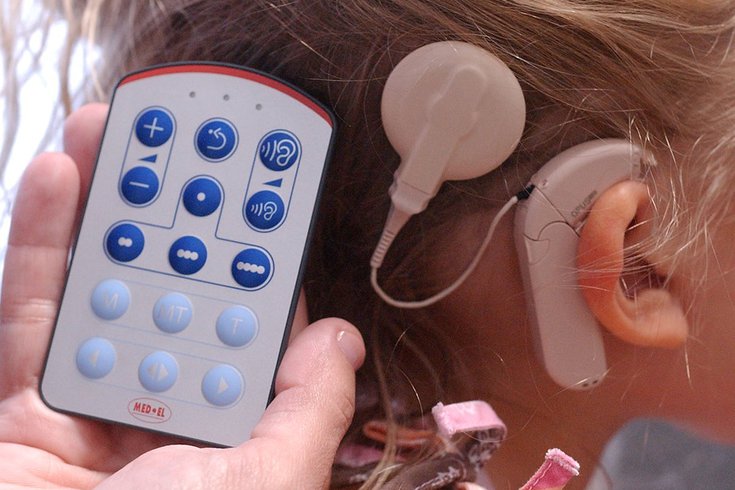 A cochlear implant consists of a microphone and speech processor that sit outside the body and a receiver/stimulator that is placed under skin and muscle behind the ear.

Cochlear implants are not always recommended for infants with hearing loss and developmental delays, but new research suggests their use could be expanded.

Cochlear implants generally are recommended for children under 12 months who have profound hearing loss in both ears and older children with serious hearing loss. Some doctors, however, don't consider them a good option for children who deaf and have developmental delays, such as low cognitive skills or low adaptive behavior. And not all insurances will cover them in these cases.

The prevailing theory is that for these children, the implants don't offer any more benefit than hearing aids. But a study published in the medical journal Pediatrics suggests that isn't necessarily the case.

Researchers from the University of Southern California found infants with hearing loss and severe developmental delays gain significantly more improvement in cognitive, adaptive behavior and language and auditory skills with cochlear implants than with hearing aids.

A cochlear implant consists of a microphone and speech processor that sit outside the body and a receiver/stimulator that is placed under skin and muscle behind the ear. The microphone picks up the sound and sends it to the processor so it can be turned into a digital signal and sent to the receiver/stimulator, which converts the signal into electric impulses. Then an electrode array collects the impulses and sends them to different parts of the auditory nerve.

While sound quality from a cochlear implant isn't the same as normal hearing, it improves the ability to sense sound and foster the development of new brain pathways for interpreting sound, experts say. With therapy and practice, children who are deaf can learn how to make sense of these sounds so they can understand speech better.

In the study, researchers gave about 200 infants with severe to profound hearing loss baseline tests in cognition, adaptive behavior, language and auditory skills. Some of the participants were identified as having learning delays.

All infants began the study with hearing aids. The researchers compared the progress of the children who continued to use hearing aids to those who received cochlear implants.

The children were evaluated over a few years and by the final assessment, those with cochlear implants — including children with learning delays — showed up to almost 25% more improvement in the tracked skills than those using hearing aids.

"This study demonstrates that deaf children with developmental impairment should not be overlooked in getting cochlear implants," said John Oghalai, an otolaryngologist at Keck Medicine of USC. "Cochlear implantation should be considered regardless of the presence of learning delays so all children can develop to their maximum potential."

Over the course of the study, which began in 2010, more insurance providers began to cover cochlear implants for children who are deaf, regardless of development impairments, Oghalai. But he said some pediatricians and cochlear implant teams are still slow to offer them to children with developmental delays.

A 2021 study found that when cochlear implantation occurs before a child turns 1, there is a greater likelihood of more typical auditory development during late infancy and early childhood. Some of the children in the study were able to achieve normal language skills by the time they started school.