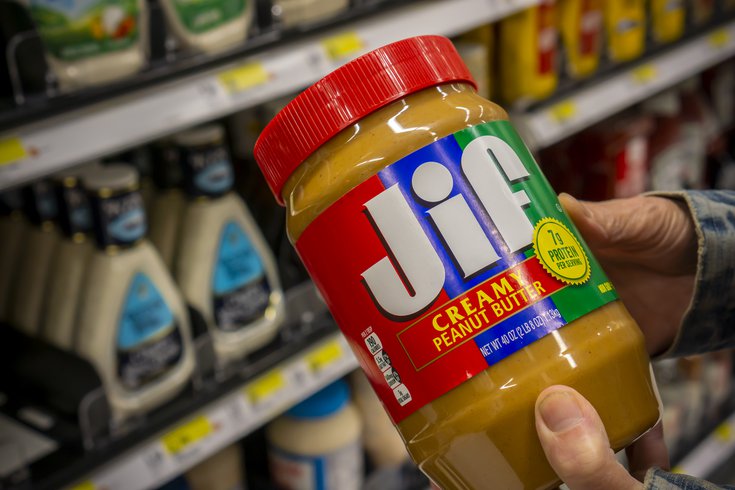 Some Jif peanut butter products have been recalled by the J.M. Smucker Co. for potential salmonella contamination. Customers who purchased the recalled products should dispose of them immediately and watch for common signs of salmonella poisoning.

The J.M. Smucker Co., who owns Jif peanut butter, is recalling several of its most popular products for potential salmonella contamination, the company announced on Friday.

Jif's creamy, crunchy, natural and to-go sized peanut butter products have been linked to salmonella across 12 states so far, following an outbreak linked to a manufacturing facility in Lexington, Kentucky.

The Food and Drug Administration is investigating the outbreak along with the Centers for Disease Control and Prevention. There have been 14 reported illnesses and two hospitalizations since the recalled products were first sold, according to CDC data. No deaths have been reported.

Though there have not been any reported illnesses associated with Jif peanut butter products in Pennsylvania, New Jersey or Delaware, both the company and the FDA are encouraging customers to stay aware of the products they're consuming.

The recalled products were distributed nationwide at major retailers and outlets. Consumers can find every impacted lot code by checking this list provided by the FDA.

Recalled products include lot codes from 1274425-2140425. Lot codes can be found alongside the products "best-if-used-by" date, typically located near the bottom of the container.

Customers who purchased a product with one of the impacted lot codes should dispose of it immediately and not consume any more of it. Any adverse reactions to Jif peanut butter products can be reported directly to the company or call 800-828-9980 on weekdays from 8 a.m. until 5 p.m.

Any surfaces that touched the recalled peanut butter products should be washed and sanitized with hot, soapy water. Jif peanut butter has a two-year shelf life, so even customers who purchased products earlier this year should double check the product for potential contamination.

Salmonella can cause serious infections in young children, frail or elderly people, or those with weakened immune systems. So far, the CDC notes that the median age of infected people is 56 years old, and 71% of infected people are female.

The CDC also noted that the actual number of infections is likely much larger than the amount reported, as some people recover without medical care and others may not yet be included in the outbreak.

Common symptoms of salmonella include fever, diarrhea (which may be bloody), nausea, vomiting and abdominal pain, according to the FDA.

Those who consumed the recalled peanut butter products should contact a doctor if you experience diarrhea with a fever higher than 102 degrees, or diarrhea for more than three days with no sign of improvement.

Other common signs include so much vomiting that you're unable to keep liquids down, and common signs of dehydration including dizziness and dry mouth.