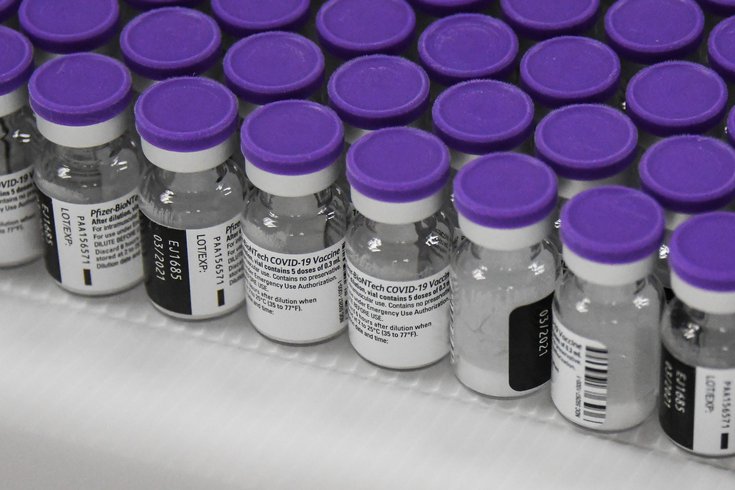 Pfizer's three-dose COVID-19 vaccine for younger children proved 80.3% effective at preventing symptomatic infection among kids under age 5 during a clinical trial, the company says. It could be authorized by the FDA in June.

The three-shot vaccine is being studied in a clinical trial involving 1,678 children ages 6 months to 4 years old. It has played out while the omicron variant has been the dominant form of the virus.

The Pfizer vaccine, which was developed with BioNTech, has one-tenth of the dose strength of the adult vaccine. The second is administered two weeks after the first; the third shot is given at least two months later. They were well tolerated with no new safety concerns, Pfizer said. Any side effects were mild or moderate.

Children under 5 are the only age group ineligible for COVID-19 vaccination, a fact that has frustrated parents and school and day care administrators.

The U.S. Food and Drug Administration's advisory committee will meet June 14-15 to discuss the Pfizer vaccine and another developed by Moderna. If the committee finds their efficacy data favorable, the FDA could authorize them as soon as June 16.

The authorization process for the Pfizer vaccine was delayed because an initial two-dose regimen did not produce the expected level of protection. The trial was amended to add a third dose, which has shown a stronger immune response in young children.

Pfizer said the three-dose regimen produces an immune response that is similar to the response seen in people ages 16-25 who have received two shots. The data released Monday has not yet been peer reviewed or published by a medical journal.

Pfizer said a formal data analysis will be conducted when at least 21 COVID-19 cases have accrued within seven days of the third dose, as per clinical trial protocol. Following that, trial efficacy data will be made public.

"Our COVID-19 vaccine has been studied in thousands of children and adolescents, and we are pleased that our formulation for the youngest children, which we carefully selected to be one-tenth of the dose strength for adults, was well tolerated and produced a strong immune response," Pfizer CEO Albert Bourla said. "These topline safety, immunogenicity and efficacy data are encouraging, and we look forward to soon completing our submission to regulators globally with the hope of making this vaccine available to younger children as quickly as possible, subject to regulatory authorization."

If the FDA authorizes the Pfizer or Moderna vaccines for young children, the U.S. Centers for Disease Control and Prevention would then determine who is eligible to receive them. Distribution should happen almost immediately, according to a CDC planning document.

In the document, the CDC notes there are 20 million children under age 5 in the United States, and that current vaccine products for other age groups cannot be used on younger children. The agency notes that shipment of the vaccines will begin once the FDA authorizes the vaccine, but they cannot be administered until the CDC provides its recommendation.

On May 17, the FDA approved booster doses of the Pfizer vaccine in children ages 5-11. FDA Commissioner Dr. Robert Califf said that though COVID-19 tends to be less severe in children, the omicron variant led to more children becoming sick and being hospitalized.