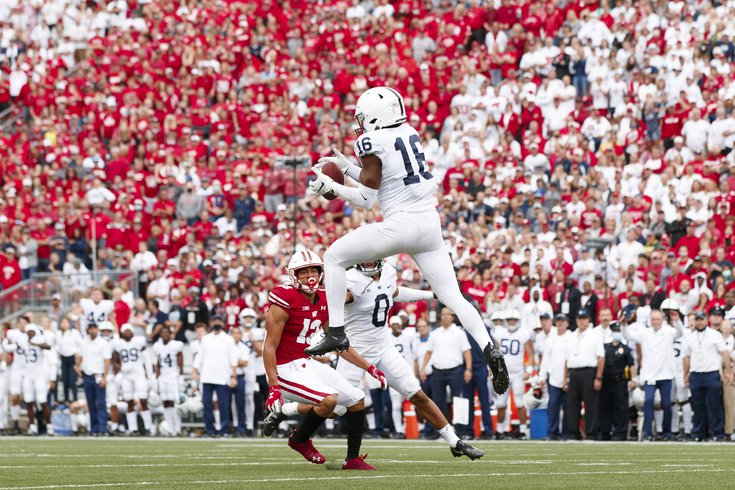 During the college football season each year, as long as you're watching the games (you know, while the Phillies' playoff game isn't on), we point out five players each week to keep an eye on who make logical sense for the Eagles in the following year's draft.

Brown is a local kid from Trenton who had a highly productive 2021 season during which he had 73 tackles, 6 INTs, a forced fumble, and a couple of fumble recoveries. That was his first season as a starter. A look:

Chauncey Gardner-Johnson and Marcus Epps are both scheduled to become unrestricted free agents next offseason.

Ibrahim is a compact, physical runner who seems to like contact, and finishes his runs, often with authority. He also has good vision, and knows what holes to hit as blocking develops in front of him. In that respect, he has a chance to be a good short yardage guy. On the downside, he only has 19 career college catches, and spoiler, he is going to run a slow 40 time.

Ibrahim isn't a home run threat, and he's already 24 years old. As such, he's probably going to be a late Day 3 guy. Still, he could be a quality power rotational back.

Bergeron is an offensive tackle from Quebec, who played right tackle as a freshman in 2019, flipped to left tackle midway through the season as a sophomore in 2020, and has remained at LT ever since. Bergeron is a lesser known prospect who is beginning to pick up some steam.

An impact run defender and highly efficient pass blocker, he's firmly lived up to our (high) expectations coming into the season. Scouts on the road OFTEN bring him up! #ShrineBowl pic.twitter.com/C639M3qAMn

With Andre Dillard likely to be on another team in 2023, the Eagles should be in the market for a new swing tackle, and ideally one with some experience playing on both sides.

Before we even get started, let's just appreciate this dude's dip and bend around the edge. Here with Michigan State:

And here with UNLV:

Reminder, this Jacoby Windmon Ghost Move Sack is against one of the best OT’s in the MWC and a future 2022 NFL Draft Pick in Zachary Thomas (who showed his athleticism off at the 2022 NFL Scouting Combine). pic.twitter.com/yja1WSJLYK

Excuse any hyperbole you may perceive here, but that one move he possesses is reminiscent of Von Miller.

Windmon originally enrolled at UNLV, where he played for three years before transferring to Michigan State. In his final year at UNLV, he had 119 tackles, 6.5 sacks, and 2 forced fumbles. He is off to a hot start in 2022 with MSU, as he has already collected 5.5 sacks and 5 (!) forced fumbles.

Windmon possesses out of the box pass rushing traits and he has experience playing as an off-ball linebacker. He is a SAM linebacker candidate in the Eagles' defense.

If that name sounds familiar, it should. Tuli Tuipulotu is the brother of Eagles DT Marlon Tuipulotu, a sixth-round pick in the 2021 draft who has grown into a rotational role on the Eagles' D-line.

Tuli Tuipulotu won't last until the sixth round. He is a potential first-round pick because of his outstanding quickness for a 290-pound defensive lineman. Tuipulotu can beat interior linemen with speed on the interior, or with power from the edge. He is an impressive prospect who had 5.5 sacks and 2 forced fumbles in 2021 and is off to a phenomenal start in 2022 with FBS-leading 7.0 sacks and a forced fumble.

Watch him win from various alignments:

Tuipulotu would be a player who I believe would fit in well in Brandon Graham's role along the Eagles' defensive line.