The team is the first in the NFL to debut the emerging technology, offering prizes for fans who make use of them 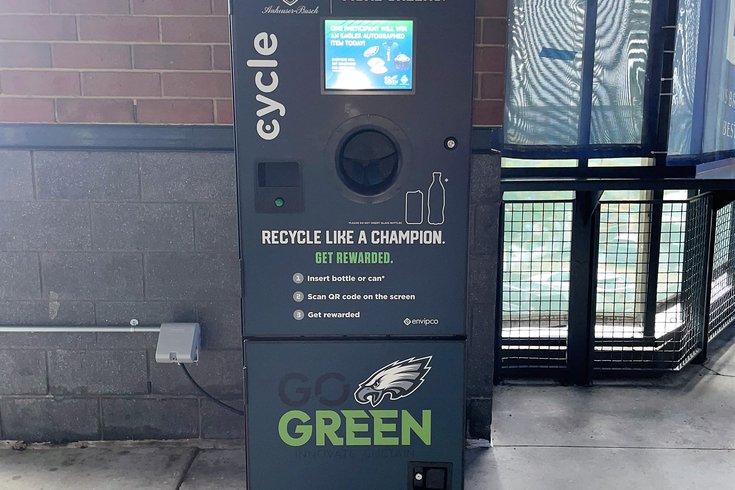 The Eagles now have two reverse vending machines for recycling at Lincoln Financial Field. The machines take cans, plastic bottles and plastic cups, but not glass. Fans who use these machines can win prizes.

Eagles fans will have a new way to recycle at Lincoln Financial Field beginning this Sunday night when the Dallas Cowboys come to town.

The team has installed two reverse vending machines that can be used to dispose of beverage containers for a chance to redeem prizes, including autographed items and even tickets to next year's season opener.

The Eagles are the first NFL team to introduce the technology, which works by scanning the QR code on cans, plastic bottles and cups. The machine compresses the container and the touchscreen display prompts fans to complete a questionnaire with a unique transaction ID. Those who use one of the machines will find out instantly whether they won and will be given instructions explaining how to pick up prizes.

The Linc's reverse vending machines are on the concourse in sections 123 and 138.

The team's new recycling effort is part of a partnership with Anheuser-Busch. The stadium will still have its usual recycling bins, but the reverse vending machines are a way to get fans engaged with the team's sustainability initiatives.

For each home game, one grand prize winner will get an autographed item. All other fans who recycle using one of the machines will get a receipt to redeem a complimentary gift from fan services at the Linc.

At the end of the season, three winners who recycled using one of the reverse vending machines will be selected to win a pair of Eagles tickets to the 2023 home opener.

The Linc's reverse vending machines are manufactured by Cycle, one of several companies that have developed technology that "gamifies" recycling. Despite the high cost of the machines — they range from $10,000-$25,000 apiece — they offer the advantage of carrying more recyclables than a normal trash bin. In turn, that reduces the number of plastic bags needed to get rid of containers and the number of truck trips needed to dispose of a haul.

The machines also provide a way to incentivize recycling, whether through prize offerings or programs that unlock rewards and coupons.

In August, Lafayette College became the first place in Pennsylvania to install a reverse vending machine on its campus. The machine can be programmed for different challenges and competitions that give people extra motivation to recycle. At the University of Miami, for example, reverse vending machines have been used to convert recyclables into cash donations for charity.

In places that have container deposits, reverse vending machines also offer an easy way to exchange recyclables for money. They've become a popular tool to encourage recycling in some countries, including Singapore, where trials have been run with the new technology ahead of the planned adoption of a bottle deposit law. People who buy pre-packaged drinks may be charged extra, but can get the money back by bringing the bottles to designated return points.

The reverse vending machines at the Linc may seem like a novelty, but these devices are likely to become more common in places like malls, shopping centers and markets in the years ahead as part of a global effort to reduce waste.