The CDC has yet to issue specific guidance to universities. In Philly, health officials are advising students to avoid skin-to-skin contact with people who show signs of infection, among other precautions 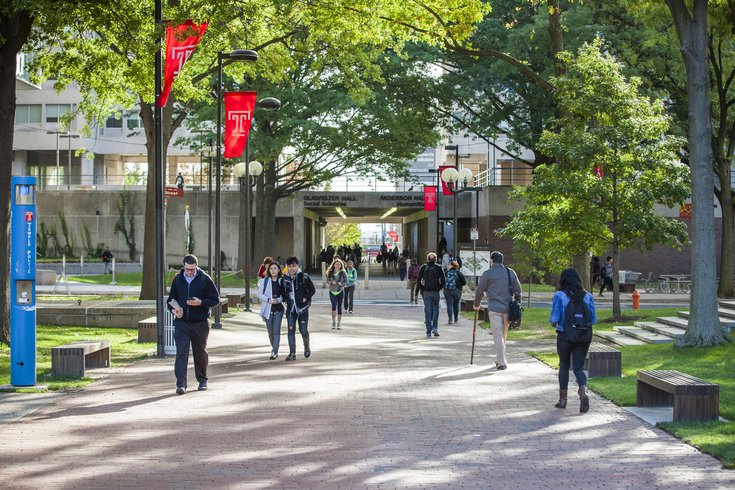 Philadelphia health officials expect monkeypox to spread at 'some level' on college campuses this fall. They have advised students to avoid skin-to-skin contact with people who show signs of infection. Above, a file photo of Temple University.

College students are heading back to campus for the first time since the monkeypox outbreak gained traction in the United States, and many health experts say their schools need to develop plans for handling potential cases.

Several schools, including West Chester and Bucknell universities in Pennsylvania, experienced cases earlier this summer. More monkeypox infections are a possibility given that college students commonly engage in many activities that involve skin-to-skin contact, including sex, dancing and contact sports, experts say.

Schools need to prepare strategies similar to those they implemented in response to COVID-19, experts say. That includes testing, contact tracing and clear communication on preventive measures and how students should respond if they become symptomatic.

Dr. Brett C. Gilbert, chief of the Division of Infectious Diseases and Preventative Medicine at Main Line Health, said it's possible that monkeypox could spread on college campuses this fall.

"The prevalence and severity are unknown at this time," he cautioned. "There should be appropriate infection control policies put in place at college infirmaries."

Dr. Martin Topiel, chief of infectious disease prevention at Virtua Health, said he doesn't think monkeypox will be a major problem on college campuses, but he said people who are sexually active need to take precautions.

Monkeypox is not a sexually transmitted disease, but it primarily spreads through close skin-to-skin contact, including during sex, hugging and kissing. It also can spread through contact with an infected person's bedding and other fabrics.

People should alert their sexual partners about any lesions or rashes they may have and avoid intimate contact with anyone who has them, Topiel said. And though this monkeypox outbreak has mostly spread among men who have sex with men, transmission is possible among anyone.

Though monkeypox also can spread through respiratory secretions, that's not viewed as a common source of transmission – unlike more airborne-dependent illnesses, like COVID-19.

"While there is some concern about respiratory secretions, it appears it takes a long duration – about 3 hours or more – for someone to be infected," Topiel said.

Colleges need to focus on public health awareness, Topiel said. That includes educating students about how to protect themselves from infection and promoting vaccination for people considered at high risk.

Philadelphia health officials "expect there to be some level of spread to colleges and universities," said Matthew Rankin, a spokesperson for the Department of Public Health. Through Monday, Philly had recorded 257 monkeypox cases since the outbreak began.

"Currently, the monkeypox virus seems to have been limited to specific social networks," Rankin said. "At this time, we have not seen advancement of spread to the city at large. However, we do expect to see spread outside of these communities and possibly into colleges and universities," Rankin said.

• Avoid close, skin-to-skin contact with people who have a rash that looks like monkeypox.
• Avoid contact with objects and materials that a person with monkeypox has used.
• Wash hands often with soap and water or use an alcohol-based hand sanitizer, especially before eating, touching one's face or using the bathroom.
• Philly students who suspect they have been exposed to monkeypox should call the city health department at (215) 685-5488.

"We know that this particular virus spreads in a couple specific ways," Rankin said. "It is important to know this disease does not spread through casual contact. It is spread through direct skin-to-skin contact or prolonged face-to-face interaction."

How are college campuses preparing?

The U.S. Centers for Disease Control and Prevention has not released any specific monkeypox guidelines for college campuses. However, it has issued recommendations for congregate settings. They include:

• Issuing monkeypox prevention messages that are fact-based and avoid introducing stigmas.
• Testing people suspected of having monkeypox. People who tests positive should remain in isolation until their lesions fully heal – which could take 2-4 weeks.
• Equipping cleaning staff with gowns, gloves, eye protection and well-fitting masks or respirators when they must clean areas where people with monkeypox have spent time.

The American College Health Association reportedly is working on drafting best practices for preventing and containing monkeypox infections on college campuses. Many schools in the Philadelphia region have begun preparing for potential cases, including the possibility that infected students will need to isolate.

West Chester University is finalizing its monkeypox protocols for the fall semester with the help of the Chester County Health Department and the CDC, spokesperson Nancy Santos Gainer said.

The university's student health services has monkeypox test kits on hand and is prepared to answer students' questions and provide testing, if needed, Gainer said. Comprehensive educational information, including FAQs, will be included on its website. The Chester County Health Department also will be conducting collaborative training with student health services and different on-campus groups.

Temple University is focused on educating students, testing people with symptoms and helping high-risk people get vaccinated. Thomas Trojian, assistant clinical director at Temple's Student Health Services, emphasized that monkeypox can be spread as soon as a person develops a fever, feels unwell or has a rash or lesions. Infected people can continue to spread monkeypox until the lesions have scabbed over, fallen off and new skin has grown back.

The University of Pennsylvania is working with health agencies to "continually assess" the risk monkeypox poses to the university community and access to vaccines and treatments, spokesperson Mary Kate Coghlan said. "Risk on campus remains extremely low," Coghlan added.

Holy Family University is "preparing an education and awareness campaign to ensure that students and the broader community are armed with the information they need to prepare, prevent, and stay safe," spokesperson Sherrie A. Madia said.

How monkeypox has spread

The U.S. declared monkeypox a public health emergency earlier this month. As of Tuesday, there were 15,433 confirmed cases in U.S., including 422 in Pennsylvania and 420 in New Jersey, according to the CDC.

In previous monkeypox outbreaks, the spread of the virus was very limited. Scientists are trying to determine why it has spread more broadly during this outbreak. They believe the virus hasn't changed, nor has the way it moves from host to host.

In West and Central Africa, where the virus has been endemic for decades, a single case or small cluster occasionally occur, primarily among hunters and people who handle – or are bitten by – infected animals. But it rarely spread widely within communities. In this outbreak, scientists believe the social networks the virus has found may be helping it spread more widely.

The good news, infectious disease experts say, is that monkeypox is not good at infecting humans, so it requires high amounts of the virus for a person to become infected. The three most common ways to contract the virus are direct skin-to-skin contact with a lesion, touching contaminated objects and close contact with respiratory secretions, like saliva from a person with lesions in the mouth or throat.

It remains unclear whether urine, feces, blood, semen or vaginal fluids can spread the virus and whether asymptomatic people can still infect others. It is also not clear how big a role inhaled respiratory particles may be playing in the latest outbreak.