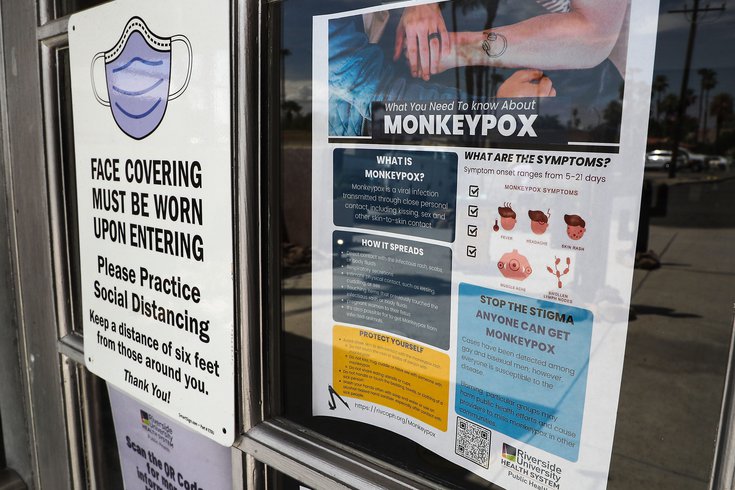 The United States leads the world in confirmed cases of monkeypox since the outbreak reached the nation in May. Philadelphia's latest data on cases and vaccinations show that health inequities present during the COVID-19 pandemic are also apparent in this outbreak.

Philadelphia has become one of the first cities in the country to release demographic data on the monkeypox outbreak, which has topped 200 cases in the city and more than 13,500 cases nationwide since the beginning of May.

An early look at case rates and vaccination data in Philadelphia suggests many of the challenges that plagued the initial response to the COVID-19 pandemic — from ineffective outreach and education to inequities in vaccine administration — could be hindering efforts to contain another emerging public health threat.

Though anyone can become infected, the vast majority of monkeypox cases so far are occurring among gay and bisexual men, as well as transgender and non-binary people, data shows. The primary mode of transmission is skin-to-skin contact.

In Philadelphia, where a limited number of monkeypox vaccines are intended for the most vulnerable populations, Black men are getting monkeypox at a rate higher than any other racial or ethnic group.

Nationally, the data on race and ethnicity in the monkeypox outbreak is still limited, but cases tracked by the U.S. Centers for Disease Control and Prevention show overall disparities in demographic groups compared to their respective shares of the U.S. population.

When it comes to vaccination, Black residents lag far behind white residents in Philadelphia. Other racial and ethnic groups, which represent a small percentage of cases in the city, also have comparatively higher vaccination rates than Black residents relative to their levels of monkeypox transmission.

Since the city received its first shipment of monkeypox vaccine in mid-July, there have been 3,909 doses administered — more than 93% to men.

White residents in Philadelphia account for 57% of vaccine doses administered, compared to 23% for Black residents, 11% for Hispanic residents, 6% for Asian residents and 2% for other demographic groups.

"From early data on the vaccination campaign, we are seeing that despite multiple strategies in place to increase equity, disparities in vaccination remain," Philadelphia Health Commissioner Dr. Cheryl Bettigole said Thursday. "It appears from our experience with COVID-19 vaccination that we will need to set up partnership vaccine clinics in diverse neighborhoods in order to better reach Black high-risk Philadelphians. That will take funding, so we are advocating to federal agencies to fund this effort and, given the urgency, working to identify internal funds that we can pull temporarily to enable us to start while waiting for federal funding."

During the early months of the COVID-19 pandemic, Black and Hispanic Americans had disproportionately higher infection and mortality rates than white people. Similar disparities showed up during the rollout of COVID-19 vaccines in the spring of 2021. These demographic differences have largely been attributed to inequities in access to health care, insufficient vaccine distribution and ineffective public outreach to vulnerable communities.

But the recognition and response to these problems, albeit slow, has gradually brought about a shift in demographic data on COVID-19. By June, the COVID-19 death rate for white people was 14% higher than the rate for Black people and 72% higher than the rate for Hispanic people, according to the CDC data. Black and Hispanic people also now have higher rates of COVID-19 vaccination than white people.

The U.S. response to the monkeypox outbreak has drawn heavy criticism for underestimating the nation's risk, particularly compared to the much smaller outbreak in 2003 when transmission was linked to contact between humans and animals. The current outbreak has not led to any deaths in the U.S., but the infection can produce painful lesions and other disruptive medical complications.

The U.S. stockpile of monkeypox vaccines has fallen short of what's needed to serve the nation's at-risk populations, leaving the most vulnerable communities in an anxious state. There is also the possibility that the outbreak, if left unchecked, could begin to impact other groups that mostly have been unaffected thus far.

The Biden administration, hoping to increase the number of available vaccine doses, recently rankled the manufacturer of the vaccine used for monkeypox by permitting each vaccine to be split into five doses. Limited research has suggested that the Jynneos vaccine, produced by Bavarian Nordic in Denmark, can be effective in smaller doses to treat monkeypox if it's injected between layers of the skin, rather than the fat underneath the skin.

Pending further review, the U.S. has held off on using a smallpox vaccine, ACAM2000, that may be suitable to immunize against monkeypox in certain populations.

"Ending the monkeypox outbreak is a critical priority for the Biden-Harris Administration," U.S. Health and Human Services Secretary Xavier Becerra said this week. "Every step of the way, we have accelerated our response including by significantly increasing vaccine supply and distribution, expanding access to tests, making treatments available for free, and educating the public on steps to reduce the risk of infection."

On Thursday, federal officials said they would boost the nation's vaccine supply with the distribution of an additional 1.8 million doses of the Jynneos monkeypox vaccine. The country is currently distributing about 1.1 million doses, but some experts estimate close to 3.5 million doses are needed. U.S. officials have ordered nearly seven million doses to be shipped in batches over the coming months.

In Philadelphia's effort to ensure that available vaccines reach the most at-risk populations, health officials have been meeting with community advocates to discuss the city's overall response to the outbreak.

The health department has included members of the LGBTQ and Black and brown communities in vaccination planning and has been inviting residents in high-risk ZIP codes to receive vaccine doses, officials said. Officials recently met with Philly Black Pride to promote city-operated vaccination clinics. The LGBTQ organization can reserve appointment slots for its referrals. The health department also is seeking partnerships with other organizations that will collaborate on hosting vaccine clinics and outreach events.

Some of these approaches mirror the targeted COVID-19 vaccine clinics held last year at schools and community centers in ZIP codes where vaccination rates were comparatively low. The Black Doctors COVID Consortium, which partnered on many of these events, received $3 million in federal funding earlier this year to expand its community engagement and promote medical care in Philadelphia's Black communities — an approach that has drawn praise as a model for other communities.

More broadly, as the United States confronts another emerging public health crisis, the CDC announced Wednesday that the agency will undertake an "ambitious" overhaul in response to its failures during the COVID-19 pandemic and the slow response to the monkeypox outbreak.

"For 75 years, CDC and public health have been preparing for Covid-19, and in our big moment, our performance did not reliably meet expectations," CDC director Rochelle Walensky said in an email to the agency's staff. "My goal is a new, public health action-oriented culture at CDC that emphasizes accountability, collaboration, communication and timeliness."