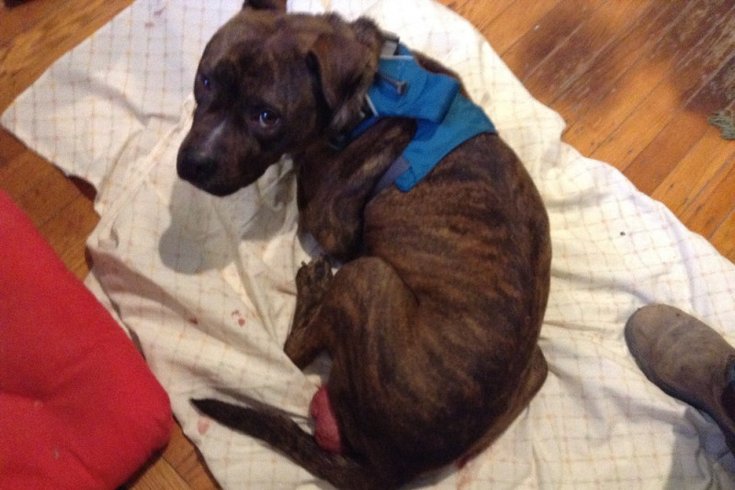 When Lee Baldwin looked out her car window to see a group of people crowded around a distressed dog near 54th and Aspen streets in West Philly on Monday, her next move was instinctual.

The pit bull, who had an enlarged mass hanging from her rear end, was wandering door to door looking for help when she trotted over to Baldwin, 53, after she had stepped out of her car.

"Does anyone know whose dog this is?" she asked the crowd.

No, they said, so Baldwin, who works at Greensgrow West and said she splits her time between living in West Philly and Bucks County, picked her up, put her in the car and headed to the University of Pennsylvania – Ryan Hospital for Companion Animals.

There, she learned that the pit bull likely had a prolapsed uterus. Veterinarians weren't sure how she got in that condition, but Baldwin, who said she has cared and rescued for animals her entire life, speculates it was the result of a miscarriage or perhaps the dog was used for breeding and had been cast out after a pregnancy went wrong. 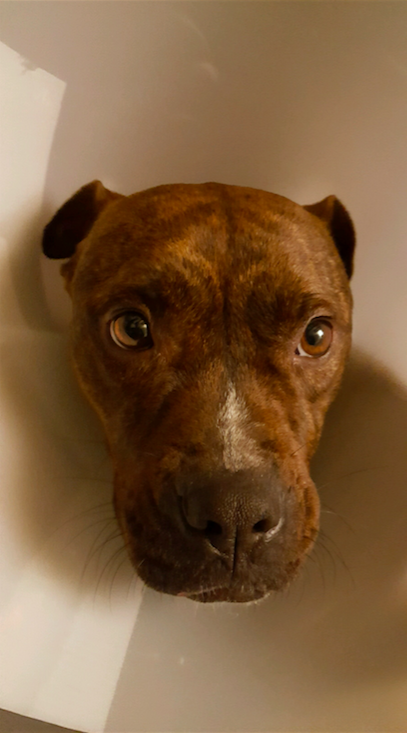 Mabel, the abandoned pit bull, is being fostered but will need a forever home once she recovers from a prolapsed uterus.

She also learned the cost of the surgery that would help the dog, too.

"I had just spent $1,200 on car repairs, I did not have the ability or credit card room to put out $1,600 for a surgery – there was just no way to pay for it," she said. "I then reached out to my community to see if anyone had any ideas for me."

That's when she got in touch with Jessica Watson of Project MEOW, a West Philly organization that helps sterilize stray and feral cats. Watson suggested she take the pit bull to Philadelphia Animal Hospital, where the cost for the surgery might be cheaper, and to make a GoFundMe page to help with the bill.

Baldwin listened. The vets at the hospital said the surgery would cost between $600 to $800 but that payment was needed in full. Since taking the dog to a shelter wasn't an option for fear she would be euthanized, Baldwin withdrew the maximum amount of cash she could from an ATM – $400 – and headed back to the hospital hoping the staff would accept that for now while she came up with the rest.

The hospital took and money and while Baldwin waited for the dog's surgery, she set up the GoFundMe page with a goal of $1,000.

Watson posted a link to the fundraiser in the community Facebook group West Willy, and funds were raised within a couple of hours.

"I was pretty elated," Baldwin said.

About half the money was raised by Baldwin's friends or family, but the other half was donated by complete strangers, she said.

"[GoFundMe] is just such a great resource because no single person I know can cough up thousands of dollars," she said.

While Baldwin spearheaded the effort and did all the work, Watson said the group effort gave it the final push needed to make the pit bull's rescue successful.

"West Willy is just a great resource," she said. "But I think that the energy, that feeling of community and 'neighborhood-ness' has been here way before."

The money raised helped Baldwin greatly, but she said the expenses to care likely won't stop there. The surgery was only partially successful. Vets at the Philadelphia Animal Hospital successfully spayed the dog but weren't able to put back the vaginal tissue that was swollen and descended from her body.

They told Baldwin the dog's hormones would gradually decrease, and the tissue should shrink, but that the recovery process will take months and lots of care.

If the area became infected or worse, it'd be back to square one – the dog would need to visit a specialist at Penn.

Luckily, a friend of Baldwin's – Alex Lauze, 29 of Point Breeze – reached out to her ready to take on the challenge. Lauze and her partner, Sara Stone-Bush, a 30-year-old veterinary technician – are fostering the dog, now named Mabel, until she's well enough to be matched with a forever home.

"She's doing great," Lauze said. "She has an appetite, and she's very friendly. We have other dogs, and she isn't adverse to other animals in the home. Her care is a lot, but she's very good about it and she allows us to clean [the enlarged area]. She's just one big ball of happy love."

Watson said Mabel's case isn't unusual but the care the dog received is. She gets calls about abandoned dogs in need of help about once a week and nearly every day for cats. She's happy Mabel is getting the care she needs now, but that's not always the case with abandoned dogs, especially among "bully breeds."

To help, she encourages people to get their pets spayed or neutered to combat the pet overpopulation crisis, to adopt pets from local shelters rather than breeders and to foster for a local shelter rescue.

"It's really unfortunate how often house pets are just put outside when owners no longer know what to do with them," Watson said. "We see it all the time with Project MEOW. Amazingly, we live in a neighborhood full of animal lovers that do their best to take them in."