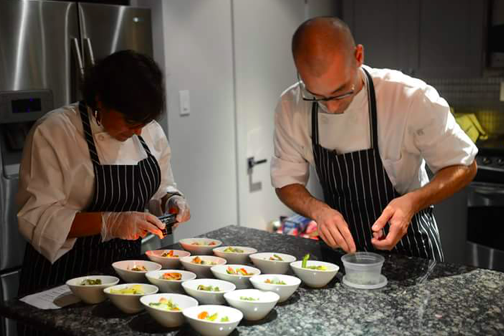 Chefs from the Philadelphia area including Cristina Martinez (left) of South Philly Barbacoa are featured on shows like Chef's Table, Chopped, and more.

Center City Restaurant Week begins Sunday and will celebrate some of the best cooking that Philly has to offer, even mid-pandemic.

Before going out to support the city's restaurant industry, we've put together a list of cooking shows and restaurant-related content featuring Philadelphia restaurants and chefs, that you can stream to work up an appetite. More than 60 local restaurants are participating in Center Restaurant Week, taking place from Sept. 13 to Sept. 25.

For example, there's Netflix's episode of "Chef's Table" featuring Chef Cristina Martinez of South Philly Barbacoa. Amazon Prime has an episode of the food-and-travel show "No Passport Required" featuring several Philadelphia restaurants and some of their chefs. And on Hulu, watch Food Network shows "Chopped," "The Great Food Truck Race" and "Diners, Drive-Ins, and Dives," where member of the Philadelphia culinary scene have been in the spotlight.

"Chopped" holds the unofficial record for most Philadelphia chef appearances. Check it out along with these other shows featuring members of the Philadelphia restaurant scene.

The Layover with Anthony Bourdain