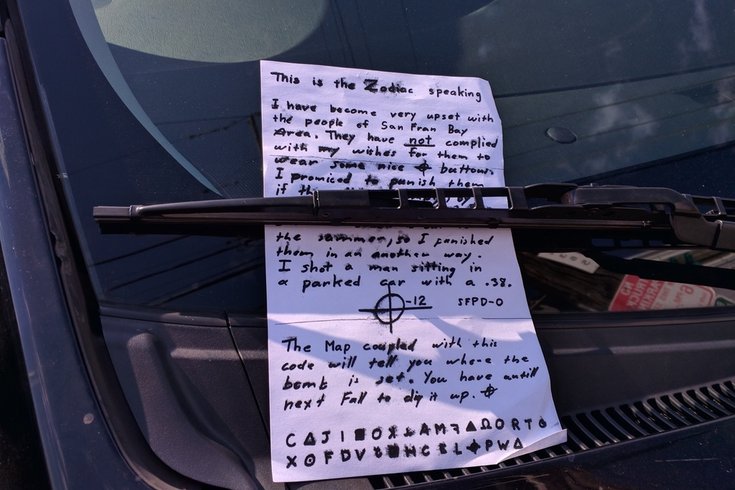 Copies of a note written by the Zodiac Killer appeared on parked cars in Fishtown Sunday.

Could it be an elaborate Halloween prank or something more?

It's not clear – but Dan Roth, a pastor at Summerfield-Siloam United Methodist Church in Fishtown/Kensington, stayed on the safe side by calling police Sunday morning when he found copies of a cryptic letter believed to be a copy of one written by the Zodiac Killer tucked under the windshield wipers of two parked cars.

"I can't really say that I was afraid," he said. "But, I thought caution was the best thing."

Roth said he was headed to his church, at 2223 E. Dauphin St., around 10 a.m. Sunday when he saw the copies of the letter believed to originally have been written by the serial killer back in 1970. The letter included a threat of an attack school children, along with a series of series of symbols that were supposed to be code spelling out the location of a bomb the Zodiac Killer claimed to have hidden. It read as follows (including misspellings):

This is the Zodiac speaking.

I have become very upset with the people of San Fran Bay Area. They have not complied with my wishes for them to wear some nice [Zodiac Killer] buttons. I promiced to punish them if they did not comply, by anilating a full School Buss. But now school is out for the summer, so I punished them in another way. I shot a man sitting in a parked car with a .38.

The map coupled with this code will tell you where the bomb is set. You have untill next Fall to dig it up.

The Zodiac Killer, whose identity remains unknown, is linked to a string of murders in Northern California during the 1960s and 1970s. The killer would send strange letters, coded in cryptograms, detailing the crimes to San Francisco media outlets, thus earning the nickname.

Roth said he's certain this is some kind of hoax and the serial killer hasn't re-emerged in Philadelphia more than 50 years later. But he called the police because the threatening content of the letter, he said.

"As I gave my story to the police officer, he got a call saying that there were a few others," Roth said.

Massi said he suspects the Zodiac Killer letters were an eerie prank timed to take place a few days before Halloween, but the district will alert Central Detectives if there's a continuing pattern or more direct threat.

"Nothing amazes me down here," Massi said.