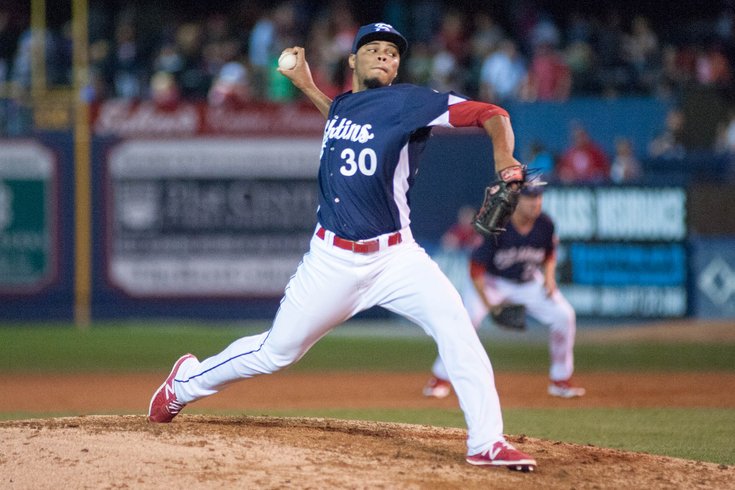 Earlier this month, Jimmy Cordero sat in a chair that may have very well been previously occupied by Cliff Lee. His locker space was a few stalls down from the one Cole Hamels held for years, and across the way from the space Jonathan Papelbon used to dominate.

Cordero, who turned 24 in October, was among the eight rising minor league players invited to Citizens Bank Park for the Phillies annual Prospect Education Program. Toward the end of the weeklong tutorial, when an informal media session was wrapping up inside the spacious home clubhouse, Cordero slowly spun around in his swivel chair to document his day with a panoramic photo with his phone.

“This experience is very good,” Cordero said a few minutes earlier. “But I want to be [in Philly], not only to be there with all of those guys I look up to (in the big leagues), but it’s where we all want to be."

Cordero could arrive quicker than the rest of the growing group of talented prospects the Phillies have assembled in the last 14 months because he already has one loud major league tool: a triple-digit fastball.

And this isn’t the case of a big-armed reliever who occasionally excites fans with 100-MPH radar gun readings. The 6-3, 215-pound Cordero regularly hits the century mark with his fastball, topping out at 103-MPH during the 2015 season.

For a frame of reference, only two major league pitchers threw pitches faster than 102-MPH during the 2015 season: Aroldis Chapman and Nathan Eovaldi, who will both pitch for the Yankees in 2016. Chapman threw the 50 fastest pitches in baseball last year. If you subtract Chapman from the mix, big league pitchers threw a grand total of 47 pitches over 101-MPH last season.

So if Cordero could regularly reach 102-MPH upon arrival to Citizens Bank Park, he'd be in some elite company.

But, wait. He may not be finished topping out.

“In winter ball this year I threw 104 once -- but I didn’t keep it up,” Cordero said with a sheepish smirk.

“He’s got a special arm. We don’t have a better arm in our organization, anywhere. So that’s a good start.”

Joe Jordan, the Phillies player development director, doesn’t remember that day, but he did check in on the reliever many are dubbing the organization’s “closer of the future” a couple of times in the Dominican Republic this winter.

And that future could be coming as quickly as his four-seam fastball’s path to home plate.

“He can run it up there pretty good,” Jordan said of Cordero, one of two righthanded pitchers the Phillies received from Toronto in the July 31 trade that sent Ben Revere to the Blue Jays.

The other pitcher, 21-year-old Alberto Tirado, also has a fastball that reaches triple digits. Revere, meanwhile, has already moved on from Toronto to Washington this winter in a one-on-one swap for veteran reliever Drew Storen.

If the Phillies have their way, Cordero will be the best relief pitcher Revere was traded for in the last six months.

“He’s got a special arm,” Jordan said. “We don’t have a better arm in our organization, anywhere. So that’s a good start.”

But it’s not necessarily the electric arm that excites Jordan the most. It’s also the head that rests above Cordero’s broad shoulders, and the maturity he has shown in harnessing his talent and using it to pitch, rather than just throw the ball by hitters.

Following last summer’s trade, which sent Cordero literally across the diamond at Northeast Delta Dental Stadium, from the dugout of Double-A New Hampshire to Double-A Reading, the Dominican native was close to dominant. Cordero struck out 18 of the 64 batters he faced in 13 games with Reading, sporting a 2.12 ERA and 0.882 WHIP. In 30 games between Reading and New Hampshire, Cordero held hitters to a .181 batting average, seventh best in the Eastern League among pitchers with at least 30 innings of work.

“This guy has one of the best arms -- as good of an arm as there is in the game, arguably,” Jordan said. “Hopefully we can get our thoughts off of that just a little bit and continue to grow as a pitcher. I really liked what I saw from Jimmy in August. I thought he pitched and pitched with big stuff. He threw the ball over the plate, he executed the breaking ball. … He showed some pitch-ability to me in August.”

Cordero says his second-best pitch, his curveball, comes in around 85-MPH. If Cordero is able to locate his fastball when he wants, the hook becomes quite a change-of-pace weapon.

In the next two months, it’ll be more than interesting to see how Cordero’s developing repertoire plays against big league hitters in Grapefruit League games. It’ll likely determine where he begins the 2016 season -- Triple-A isn’t out of the question -- and it could give the Phillies a glimpse of how close he is to joining the big league team, too.

Two springs ago, Ken Giles arrived to his first big league camp and made a lasting impression on the coaching staff with his triple digit-reaching fastball, consistency, and poise for a pitcher who hadn’t even reached Double-A yet.

But fans saw the talent and clamored for the closer of the future to join the big league pen; Giles arrived in June and was dominant, striking out 44 of the first 108 major league hitters he faced.

Since Giles was traded for prospects in December, there has been plenty of debate concerning who will replace him as the Phillies closer this season. Veteran David Hernandez, who worked as Arizona’s closer for a portion of the 2011 season, seems to be the early favorite, with non-roster veterans Andrew Bailey, Ernesto Frieri and Edward Mujica (all with big league closing experience) expected to be in the mix, too.

“If you’re a closer for a team, that’s an honor for you. So I want to be the closer for the Phillies. ... You only have one on each team. So that would be unbelievable for me."

But the Phillies aren’t expected to improve much (if at all) on their win-loss total in 2016 coming off a 99-loss 2015 season. So the identity of this year’s closer is more of a fun spring training storyline than any kind of X-factor to the team’s chances to contending this summer.

When the Phillies are competing for a division title again (as soon as 2018?) they will need a difference-making closer. And while many are up for the title of “2016 closer,” there’s only one guy who seems to be wearing the “closer of the future” label.

“When I listen to other people talk about that, it makes me feel good,” Cordero said of wearing that unofficial title. “If you’re a closer for a team, that’s an honor for you. So I want to be the closer for the Phillies. It’s a good position. If I go to the minor leagues and work on being a closer, it’s a good experience and a good opportunity to play. Closers are different. You only have one on each team. So that would be unbelievable for me (to be a major league closer).”